The city of New York is a travel destination for its mashup of inimitable people, fashion, art, food, and architecture. Taking a day trip to check out the borough of Brooklyn is an absolute must.

Once upon a time, the borough was humble farmland. It transformed into residential property following the American Revolutionary War and became a city in 1834. In 1898, Brooklyn officially became a part of New York City.

Not all parts of NYC have held onto a grizzled, gritty exterior. The borough of Brooklyn continues to delight people from all walks of life for being family-friendly and picturesque. Brooklyn maintains a strong eclectic vibe, boasting world-class museums, parks, libraries, and architectural gems dating back centuries.

There are plenty of beautiful spaces to explore via walking, biking, and riding scooters that are teeming with history and a rich background story.

Note: The following article was written by a transplant turned local to the city of New York. 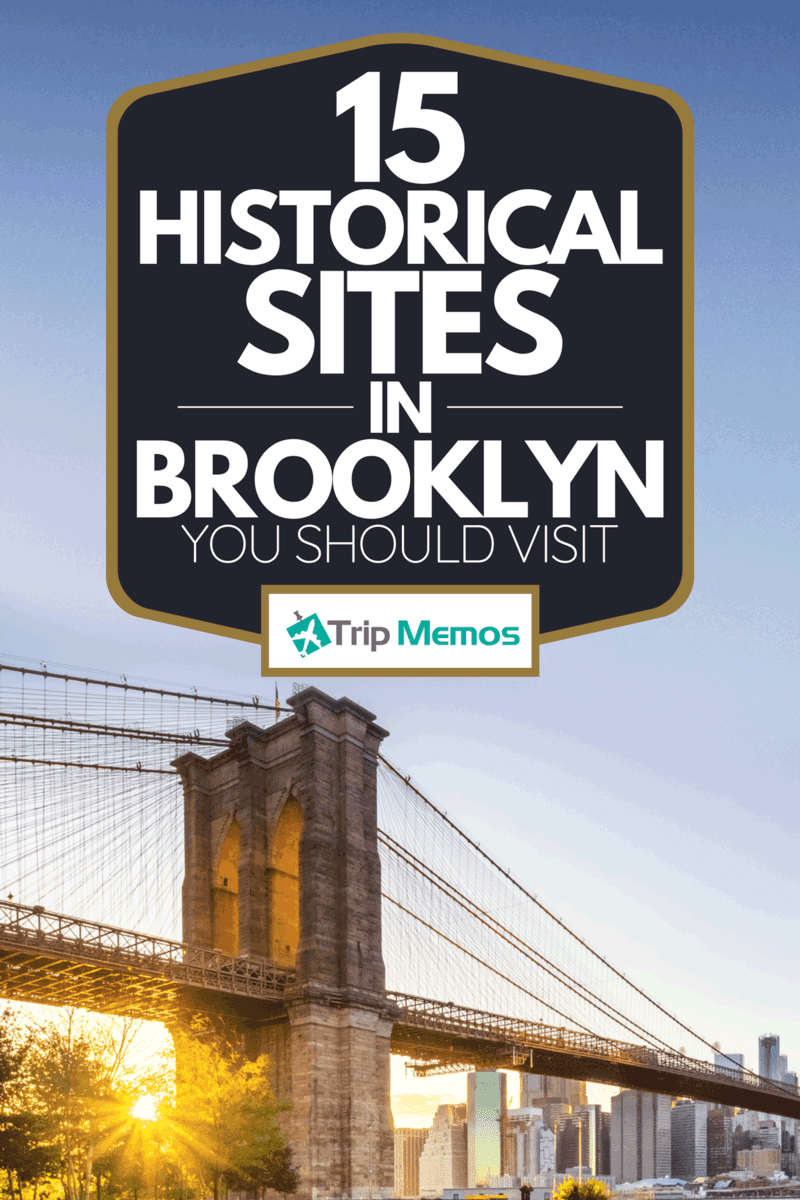 How To Get Around Brooklyn 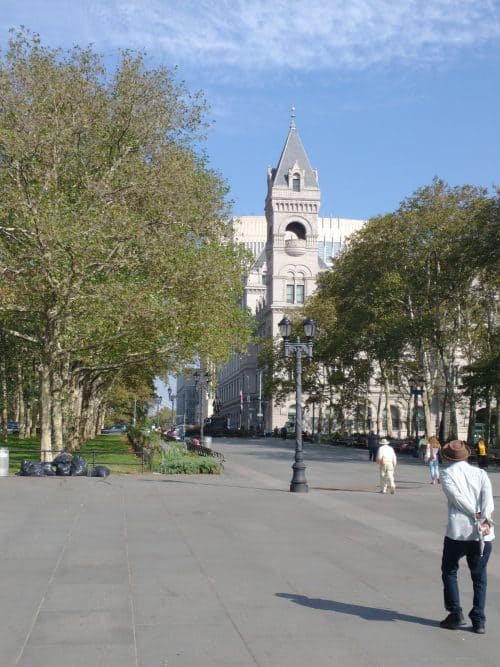 Thankfully, Brooklyn is pretty spread out and has a more laid-back vibe than the noisier, busier, crowded borough of Manhattan. Finding street parking isn't as challenging, and the borough has a colorful patchwork of diverse neighborhoods to enjoy. Feel free to rent a bike or scooter from outposts throughout the city, or grab a Metrocard and hop on the MTA for a visit.

If you are taking the train from Manhattan, you can jump on the 2, 3, 4, 5, A, C, N, Q, or other lines depending on where you are heading in Brooklyn.

The Atlantic Avenue- Barclays Center is a major stop and hub in Brooklyn connecting multiple train lines, including the Long Island Rail Road, if you are feeling adventurous. Make sure to snag a picture of the transit map for the MTA while aboard a subway car or ask for an old-school map at a station kiosk window.

Once you map out where you want to go in the borough of Brooklyn, you can get around easily via bike, the bus, walking, or hail a cab. Locals are happy to give you directions if you are lost.

And be sure to visit suggested places to grab a book, art, coffee, a bite to eat, or relax. If you can, plan to visit Brooklyn when there are farmer's markets up and running for fresh produce, local artists' offerings, jewelry, and live music. 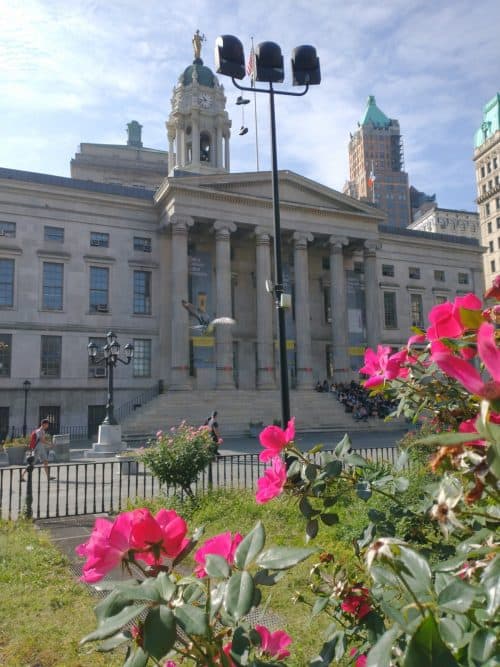 Located in downtown Brooklyn, this elegant municipal building in the Greek Revival style was erected in 1848. It was designed by architects Calvin Pollard and Gamaliel King, and it is Brooklyn's oldest public building. Across from this grand structure is a mid-19th-century fountain with nearby shrubbery and flowers.

As is the case for many locations in NYC, this historical landmark has been used for television and musical artists. If you are up for it, check out the train stop Hoyt-Schermerhorn, a few minutes away from Borough Hall, another popular location for movies and media. 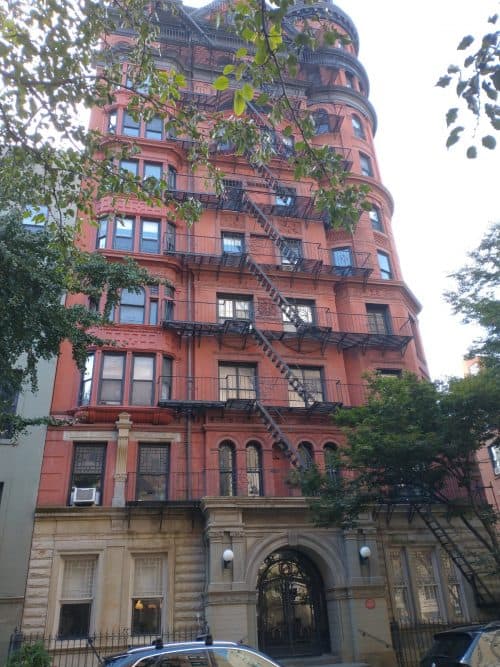 If you love gushing over tree-lined residential areas with beautiful townhouses and other properties built before the Civil War, check out Brooklyn Heights. This neighborhood is protected and boasts homes with Victorian Gothic, Italiante, Classical Revival, and late Federal architectural styles.

The posh residential neighborhood has stunning views of the waterfront of the East River, Lower Manhattan, and is the first stop off of the Brooklyn Bridge. Step back in time and enjoy the grandeur of the past but partake in modern shopping and fine dining. 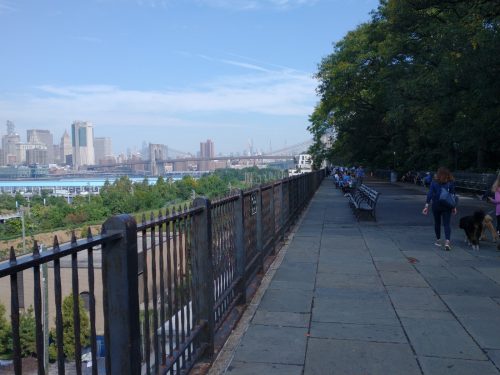 If you are walking over from Manhattan to Brooklyn via the Brooklyn Bridge, stop at this park for breathtaking views. People watch and capture a New York moment on your camera while watching runners and parents pushing baby strollers. 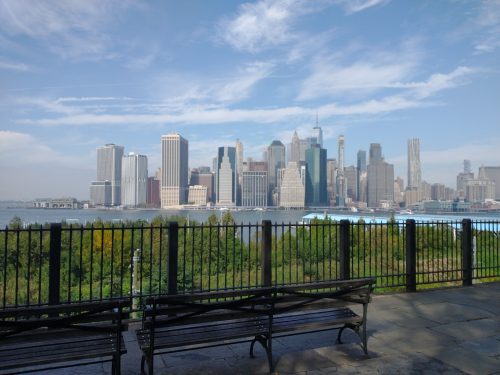 You can spy helicopters overhead, ferries and boats on the water, and the skyline along the Lower East Side of Manhattan.  Grab your takeout or street food to enjoy eating along the waterfront. There are plenty of benches in this serene but lively location.

Perhaps there is nothing more iconic in NYC than its complex, sprawling subway system uniting all of the boroughs except for Staten Island. Get to know more about the MTA and make a stop at the NY Transit Museum in downtown Brooklyn.

Discover vintage subway tokens transformed into collectible jewelry or grab a t-shirt representing your favorite subway line to commemorate the experience. The museum is located in an official subway station that was decommissioned in 1936. Learn more in-depth knowledge about the public transit system that keeps NYC running. 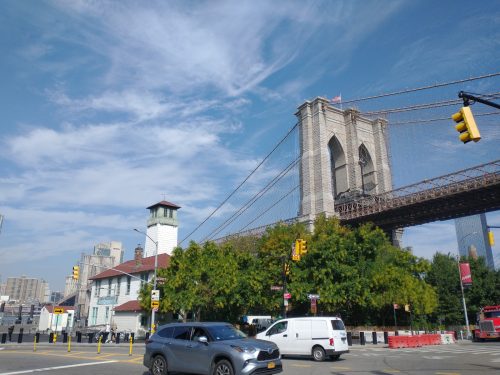 Another popular subject for photographers and artists alike is the Brooklyn Bridge. The bridge connects the boroughs of Brooklyn and Manhattan and spans 6,016 feet, and is 272 feet high. The suspension and cable-stayed bridge was designed by John Augustus Roebling and was constructed between 1869 and 1883.

Be aware, this bridge is incredibly popular with visitors and residents, so if you want something less crowded, check out the DUMBO bridge. 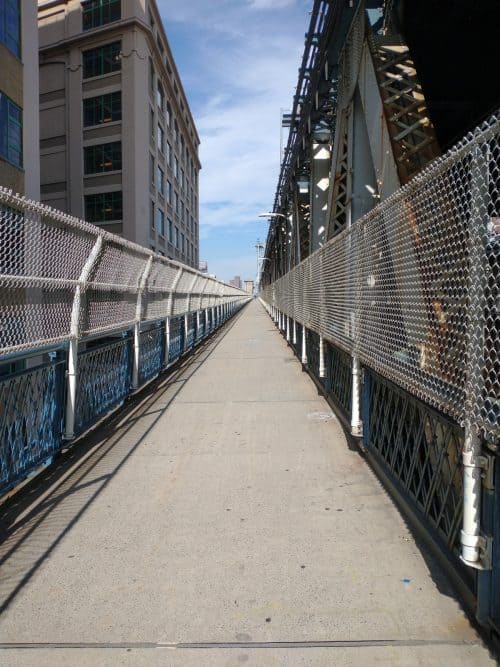 Take a route less crowded than the showstopping Brooklyn Bridge, peppered with gritty street art and the rumbling of trains going in and out of Manhattan. Get to see another side of NYC when you venture across the Manhattan Bridge connecting the DUMBO neighborhood to Canal Street in Lower Manhattan.

You get terrific, intimate views of rooftops, the East River, and the changing landscape as you move from Brooklyn into "the city." 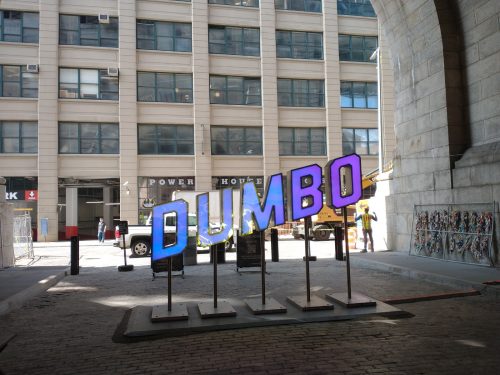 If you love shopping high-end boutiques or dining on the finest of fare in Brooklyn, stop in the DUMBO neighborhood. DUMBO stands for Down Under the Manhattan Bridge Overpass, and it is not to be missed. 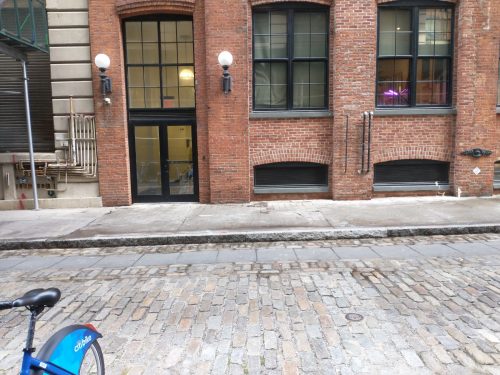 There are cobblestone streets, old warehouses now featuring trendy retail spaces, and you may even stumble on an active shoot for a film or commercial. There are also performance and gallery spaces to sate your desire for big-city arts and creativity. 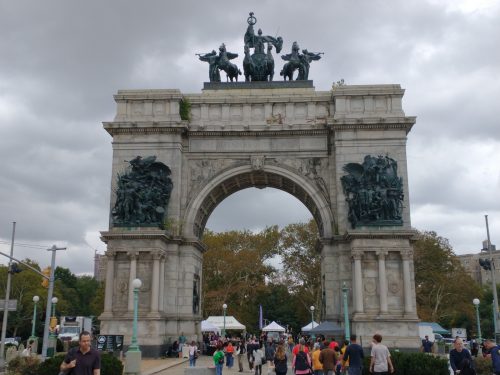 NYC is steeped in a rich military, naval, and commerce history built off of the waterways. The Soldier's And Sailors' Arch was built between 1889 and 1892, steps away from the Grand Army Plaza stop off the two and X line. The monument was dedicated "To the Defenders of The Union, 1861-1865."

The architect was John H. Duncan, and the sculptors were Frederick MacMonnies and Phillip Martiny. Nearby this beautiful arch is a roundabout and a monument to West Point graduate and military engineer Gouverneur Warren. 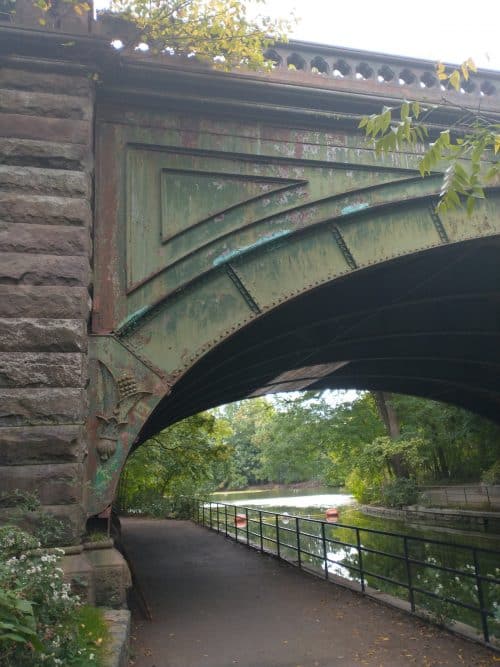 Step into Prospect Park, sandwiched between the Flatbush and Park Slope neighborhoods, and you may not believe that you haven't left NYC. The design of this park is so amazing; it's hard to think it isn't natural to the area but was constructed for the borough. Within this grand flagship park's 526 acres, an ice rink, zoo, carousel, bandshell, boathouse, bridges, and plenty of paths to jog, walk, or bike. 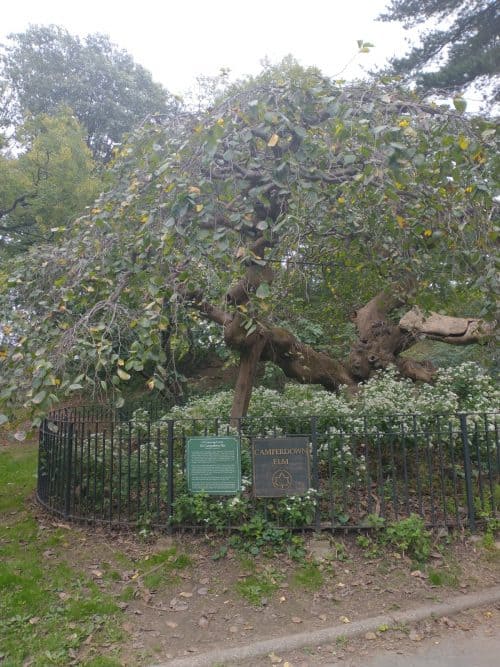 Meander along its pathways, and you can always manage to stumble on something new and exciting. Don't forget to come to the park to check out seasonal farmer's markets, artisans, crafts, and live entertainment on weekends. 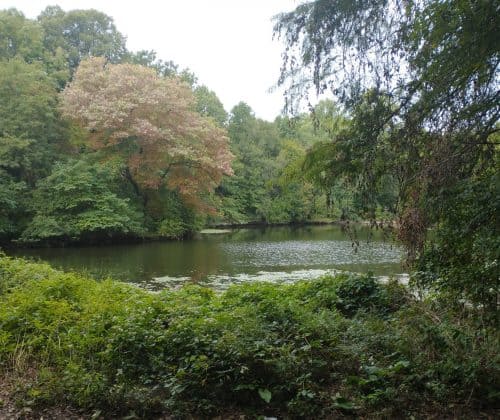 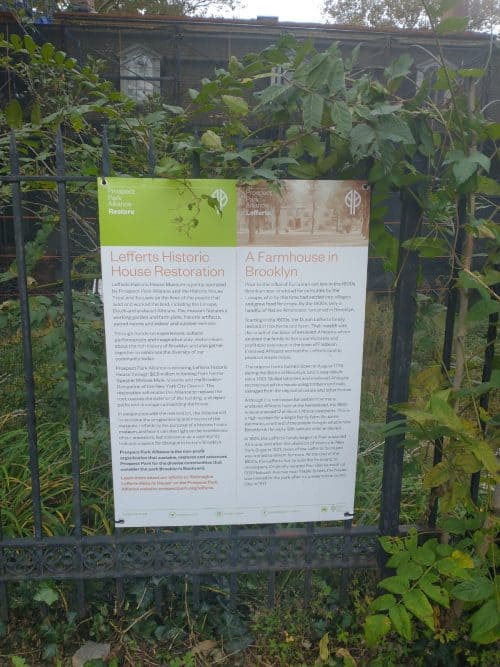 Step back into the 18th century with a visit to the Lefferts Historic House and museum. The building was under construction on my visit. However, the location showcases historical artifacts from the past and tells the stories of the original Lenape residents of Brooklyn and NYC, enslaved Africans, and Dutch settlers. 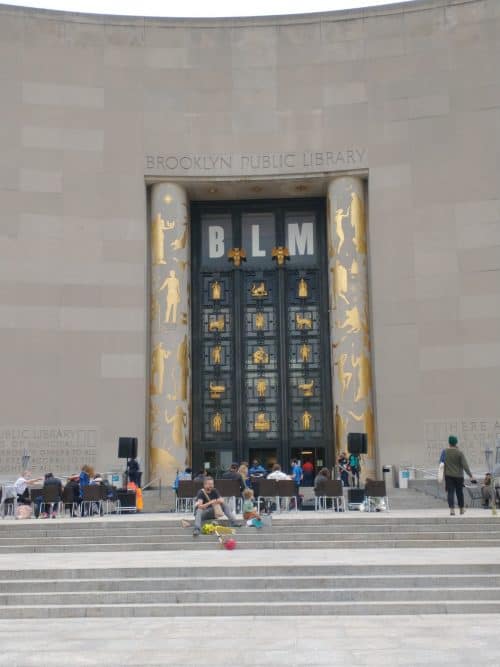 Support the power of literacy and check out the sixteenth largest public library in the country. The Brooklyn Public Library system was established in 1866 and has over 5 million items in its collection. The Central Library for Brooklyn is wrapped in a limestone exterior with a detailed, gilded Art Deco entry portico designed by sculptors Carl P. Jennewein and Thomas Hudson Jones. 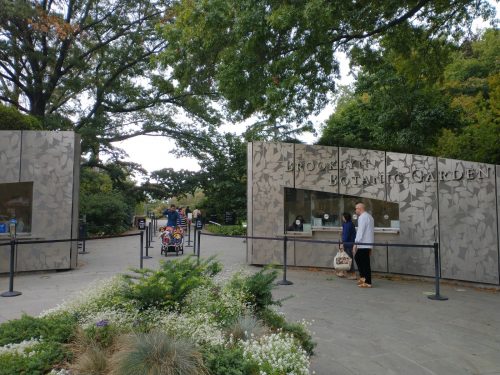 Brooklyn has a lot of green spaces, providing a respite from the urban sprawl of concrete, brick, and steel in the city. The Brooklyn Botanic Garden was founded in 1910 and sits atop the land of the Lenape, New York's original indigenous inhabitants.

As an oasis for the surrounding community and visitors, the Brooklyn Botanic Garden offers programs for children, urban gardening, and other educational opportunities. The garden is steps away from Prospect Park and consists of 52 acres. 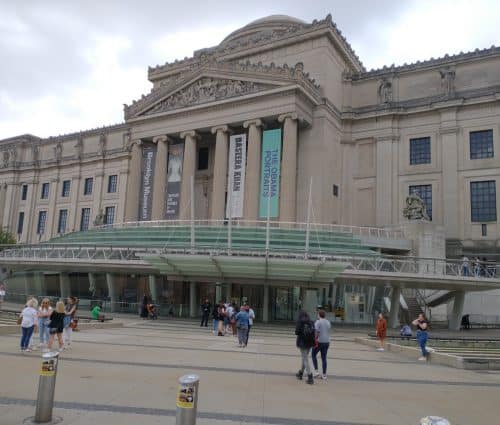 The Brooklyn Museum is one of the largest and oldest of its kind in New York City and the country. The institution features 560,000 square feet of space filled with fascinating artifacts and rotating exhibits.  Founded in 1895, the museum was initially supposed to be the largest art museum worldwide. Today, it contains over 1.5 million artworks. 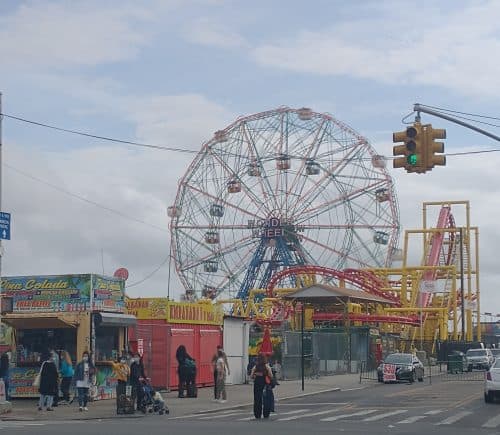 Take a walk on the wild side and take a long trip via the subway down to Coney Island. It has maintained itself as a summer destination for New Yorkers for over 150 years and is still going strong.

Come during warmer weather when the boardwalk is buzzing with activity or visit on an off-day and season for fewer crowds. Plan a day at the beach for making sandcastles or catching the sun and surf. 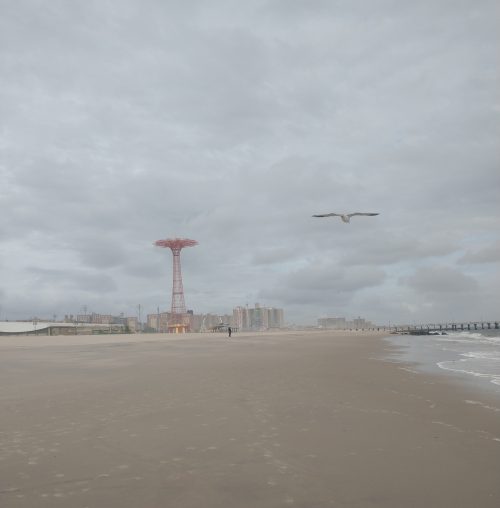 Get in touch with your inner child and take a ride on the famous wooden Cyclone roller coaster. At Luna Park, you can ride the Wonder Wheel after grabbing a hot dog at Nathan's Famous.

Coney Island may be a residential neighborhood by the seaside but still, locals and visitors look forward to the annual Mermaid Parade, Circus Sideshow performers, and the smell of funnel cake and cotton candy in the air. Not too far from the amusement park attractions lies the NY Aquarium, another crowd favorite. 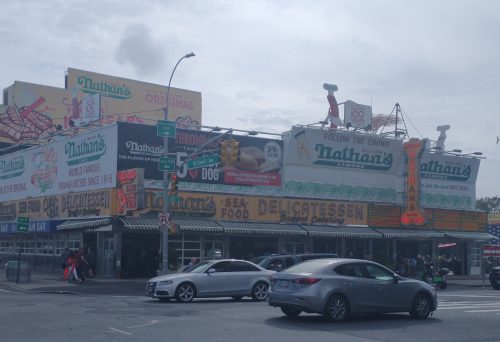 Feeling hangry? You won't be hungry or angry anymore after stopping for a bite at Nathan's Famous. Grab an iconic NYC hot dog at the Brooklyn-born food chain with a side of fries, a drink, or even grab a burger.

There's nothing like chowing down on a Nathan's Famous hot dog or a thin-crust, extra-large foldable slice of pizza pie when it comes to New York City and food. You have to have it at least once when you're in town.

New York City is always full of surprises. You might think you know the city from popular TV shows, films, and music filled with catchy lyrics, but you don't. You have to come down to be a part of it. Brooklyn offers a unique, vibrant flavor out of the five boroughs that make up New York City.

Enjoy getting around the borough, perusing bookstores, picking up something nice from the shops, and immersing yourself in the food, people, music, and culture. You won't be disappointed.

What To Do In The Thousand Islands Area In Upstate New York?

The Arizona Bucket List: 13 Places You Simply Must Visit

Is It Safe To Drive From Portland To Bend In Winter? [Roadtrip Tips For Tourists]