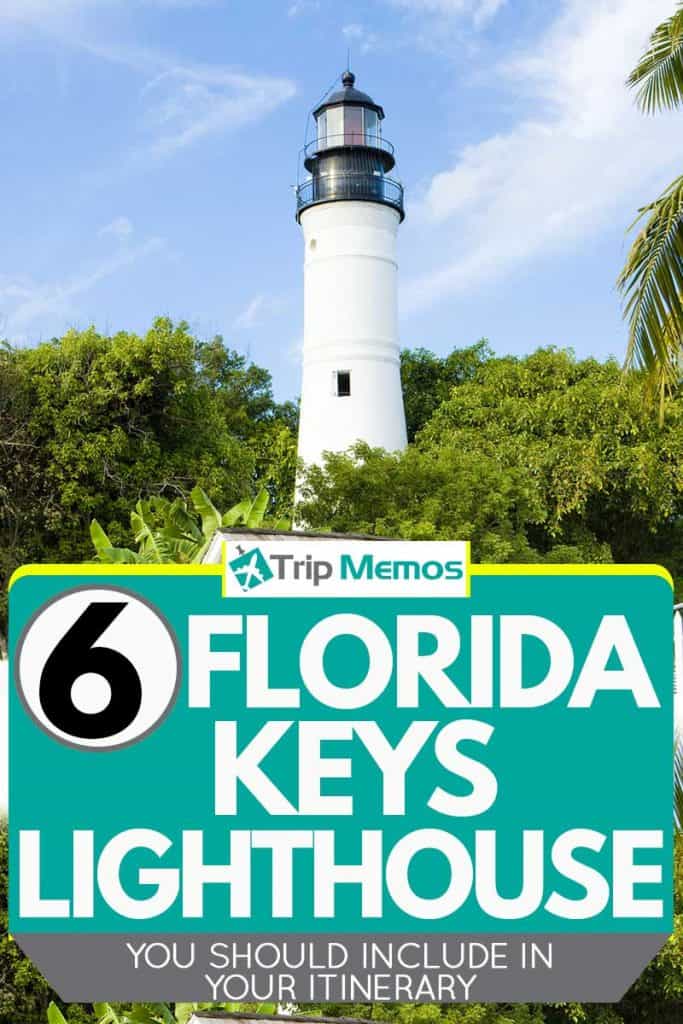 Whether you are traveling by yourself or with your family, you want to sightsee and experience things that you wouldn’t get to otherwise. Getting the see the many amazing historical lighthouses that stretch between Boca Chita and Key West is a great option. If you have these already on your itinerary, then you will want to know where each one is and how to find it when you are in Florida.

When our kids were younger, we used to play "lighthouse spotting" as we traveled along the coasts (both of the Pacific and the Atlantic). They were quite young, so we usually skipped any actual tours (with a few exceptions along the Oregon coast).

As part of our preparation for our up and coming trip to Florida, I prepared a list of the lighthouses along the Overseas Highway, aka the road to Key West. In this post, we're sharing what we found out about each lighthouse's history and let you in on some tips on how to get to each one.

The six lighthouses along the Florida Keys are -

Keep reading for more information on each one, and how to work them into your Florida Keys itinerary. Don't miss out on our full guide to the 66 awesome things you can do along the Florida Keys too! 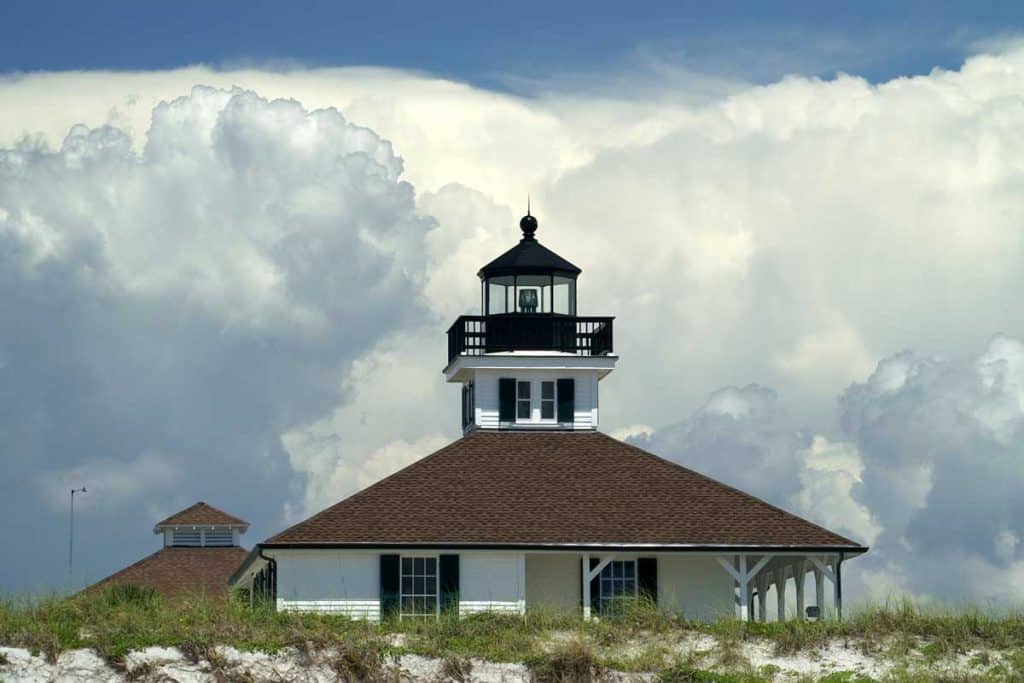 This 65-foot beauty calls Boca Chita, Florida; it's home and has since the 1930s. Built by Mark C. Honeywells, it was placed at the north end of the harbor and made with white brick and limestone. Honeywells had initially built it to use for business purposes; however, he hadn’t gotten the proper permission for building and had to shut it down almost immediately.

Although it is not a functioning lighthouse, its natural beauty and well-crafted structure is a beautiful sight for tourists and locals to see during times when proper staff is there to allow it. This time is usually between September and May, with select days and times also available during the summer as well. From the observation deck, you can look out over the entire Miami skyline.

The Boca Chita Lighthouse is situated at the end of the harbor in Biscayne National Park, which means that the most natural entrance is through the park. You can get to this park by way of US Highway 1. The Biscayne National Park has no entrance fee and no parking fee unless you plan to stay overnight, so this is an excellent option for families who travel on a budget.

The Carysfort Reef Lighthouse was commissioned by Congress to be built starting in the 1840s. Becoming the third screw-pile lighthouse in the entire U.S. was a big honor, but the actual construction turned into a much bigger project than was originally intended. The red color of the lighthouse and the white lantern were chosen because sailors could easily see them against the dark waters at night.

The original structure was built with a fully-enclosed balcony and keeper’s quarters but was eventually taken down. This lighthouse is not open to the public for tours or observation, likely because it is one that is actually in the middle of the water. Still, if you want to get close enough to see it, you can schedule a snorkeling expedition nearby to get a closer look. With the reefs of the area being a big draw for tourists, many businesses will rent out boats and equipment for you to do so.

The Key Largo Lighthouse history is a long one, fraught with delays and money issues all along the way. Initially, the lantern of this lighthouse was used in the construction of the Rebecca Shoal Lighthouse. Still, after much trouble with getting proper funds to finish construction, and eventually vandalism, the structure was destroyed and sold piece by piece to junkyards.

After all this, the lantern was discovered by a previous owner of the Rebecca Shoal Lighthouse and used as the lantern for his new lighthouse he was building in Key Largo. This original piece is still there, and the lighthouse was sold to new owners who painted the building with a distinct red and white checkerboard pattern and turned the building into guest rooms for tourists to stay.

In 2014, the light was turned off, and the building is now vacant. You can get to this location by driving, and the beach area has access to many wedding venues that are nearby. 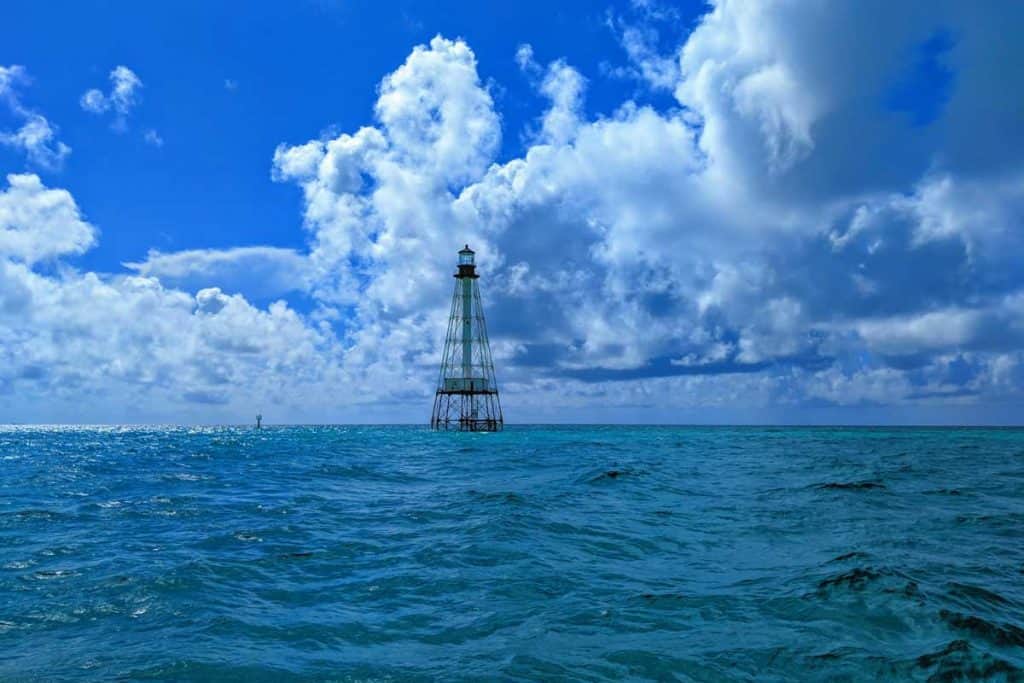 The Alligator Reef Light got its name in honor of the Navy Schooner “Alligator” which was an anti-piracy ship in the Key West. Initially built in 1873, this light was made as an iron pile skeleton frame with a lantern that’s black and a light that sits 136 feet above the sea. The light shines both red and white light that alternated so sailors could tell which sector they were in.

This lighthouse had a large number of keepers throughout the years, but the lighthouse was automated in 1963. This may have been a bit sad for the men keeping it safe, but with the area prone to hurricanes, it was much safer to have no person put in harm’s way.

The light was deactivated in 2015, but in 2019 it was said that the lighthouse would be given to any agency who wanted it to use it for education or preservation. This lighthouse is located in the waters of the Alligator Reef, which means that you can’t access it by roads. However, you can choose to snorkel or dive in the area to get a closer look. You can also rent a boat to travel to it.

But unlike other lighthouses that are further from the highways, you can get a glance of this structure when you are near Islamorada and on the overseas highways. 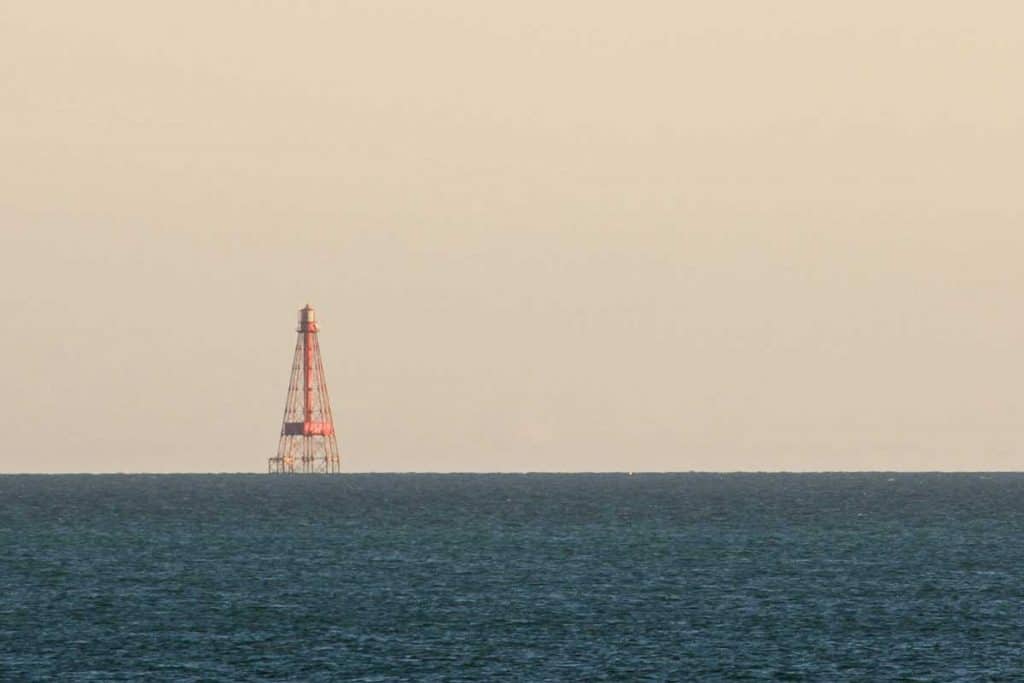 The Sombrero Key Lighthouse is located on a submerged reef in Marathon, Florida. This lighthouse dates back to the early 19th Century and the Spanish, which is where this light got its name since they had called the area Cayo Sombrero. This area was once an island, but as times passed, the land was washed away. At low tide, the reef below can be sometimes be seen. This structure was built in 1858 and is 142 feet tall, making it the tallest of all the Florida Key lighthouses.

This structure is a skeletal, octagonal pyramid that was made of iron and painted red. The tower comes with two different platforms, one of which held the generator for the light, and the other was the keeper’s quarters. This lighthouse was officially deactivated in the year 2015.

Now, this area is a popular spot for snorkelers and divers, and you can also often see several boats close to the area with people trying to get a closer look at the lighthouse. Both options are a great way to see the structure, but with the tower being so tall, it is better to take a boat to the Sombrero Reef, so you’re able to get a good look at the lantern and the top of the lighthouse. 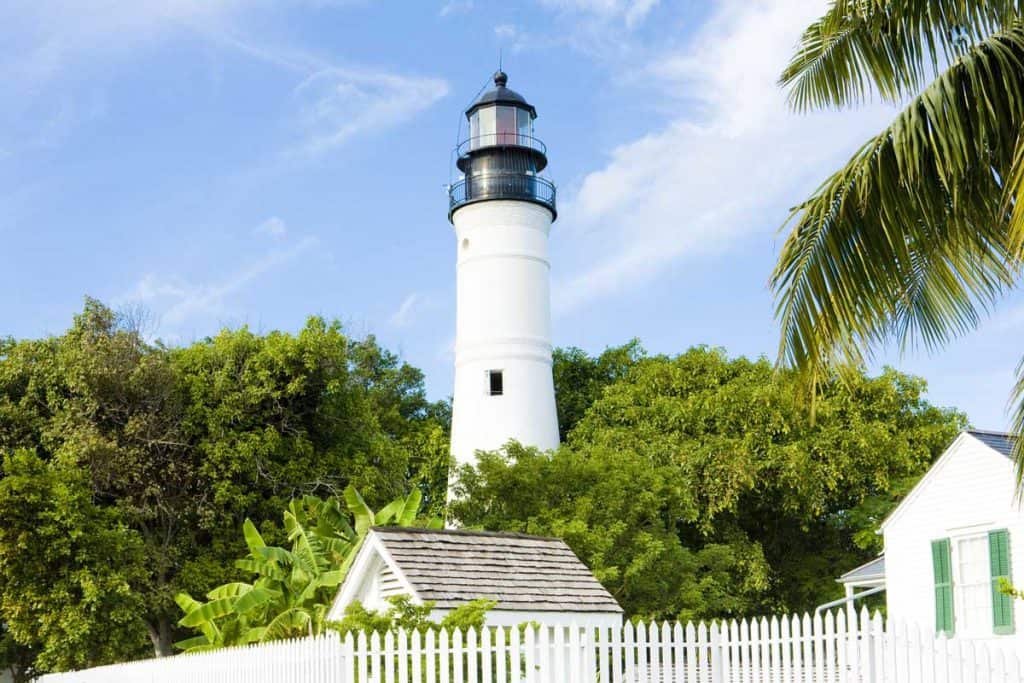 The Key Largo Lighthouse is an older building than others being built back in 1825. The 65-foot tower is not the same one that stands there today, as the original building was devastated during the Great Havana Hurricane of 1846. Because of some slow governmental reorganizing, it took some time to rebuild, but it was finished in 1848.

The original lighthouse was made of brick and painted white but had a blue lantern as its top. The lantern has since been replaced due to hurricanes damaging it in 1873, but it remains blue still today. In 1894, construction on the tower began again after the landscaping became a problem for sailors.

The rebuilt structure of 1848 was only 50 feet tall but was later raised. This was due to tree growth around the lighthouse, which blocked the view of the light for those at sea. The building was raised until it was around 100 feet above the sea’s level and is now a functioning museum as part of the Key West Lighthouse and Keeper’s Quarter’s Museum.

If you want to see this lighthouse, you can now take a tour of the building and climb up the 88 steps to the top of the tower and look out over the view. You can even take a tour of the grounds, which has the keeper's quarters, which is now filled with nautical artifactual finds, furniture from the time of original construction, as well as vintage maps and antique photos.

Because this lighthouse is home to a museum, it is easy to find by map or GPS, and there is parking available near the museum so you will be able to drive there for a day of sightseeing. For a small fee, you have access to both the keeper's quarters and the lighthouse, and parking is free. Kids under the age of 6 are free too.

I'm going to wrap up this post by asking for your feedback. If you've traveled to the Keys or perhaps are a local resident, let me know what you think about this list.

And if you're planning your own Florida trip, then maybe you'll find these posts helpful too -

7 Florida itineraries for one week in the state

Is Florida safe to visit?

What to pack for Florida

What to Pack for a Trip to Florida

4 Best Road Trips From Florida To Other States