Pikes Peak is one of the most famous mountains in the US. America's mountain offers visitors a combination of cultural significance, an exhilarating drive, and magnificent views that are truly unique.   There's more than one way for you to get all the way to the mountain top for the spectacular views.

We visited Pikes Peak a few years ago and I got to drive the entire way up - and then back down again! I have a few tips to share -  based on our own experiences - that should help make the most of your visit to America's mountain. 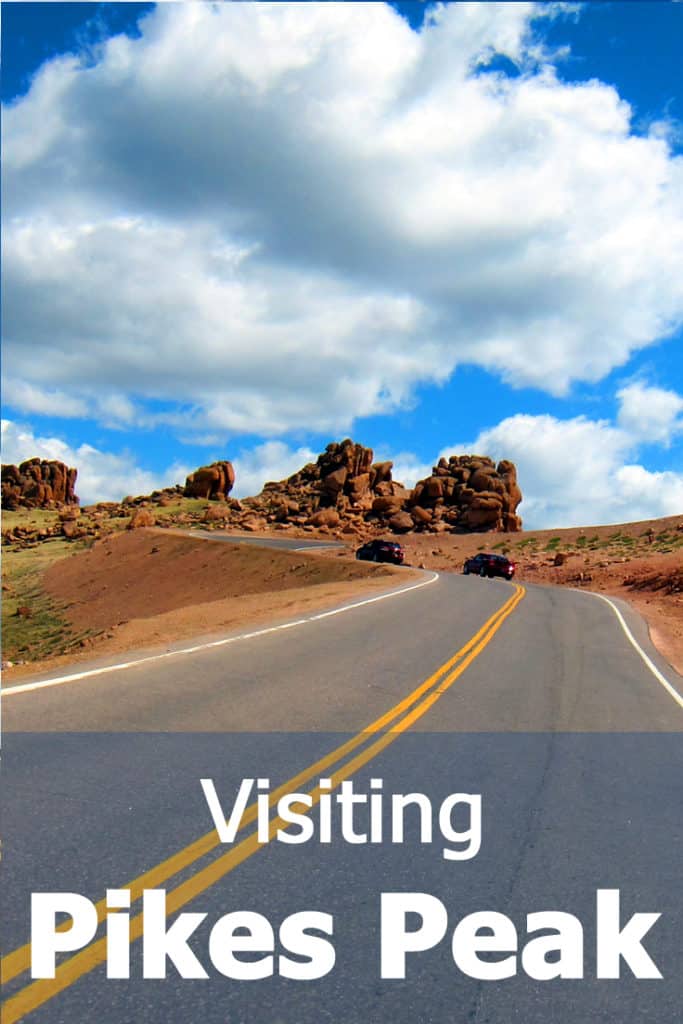 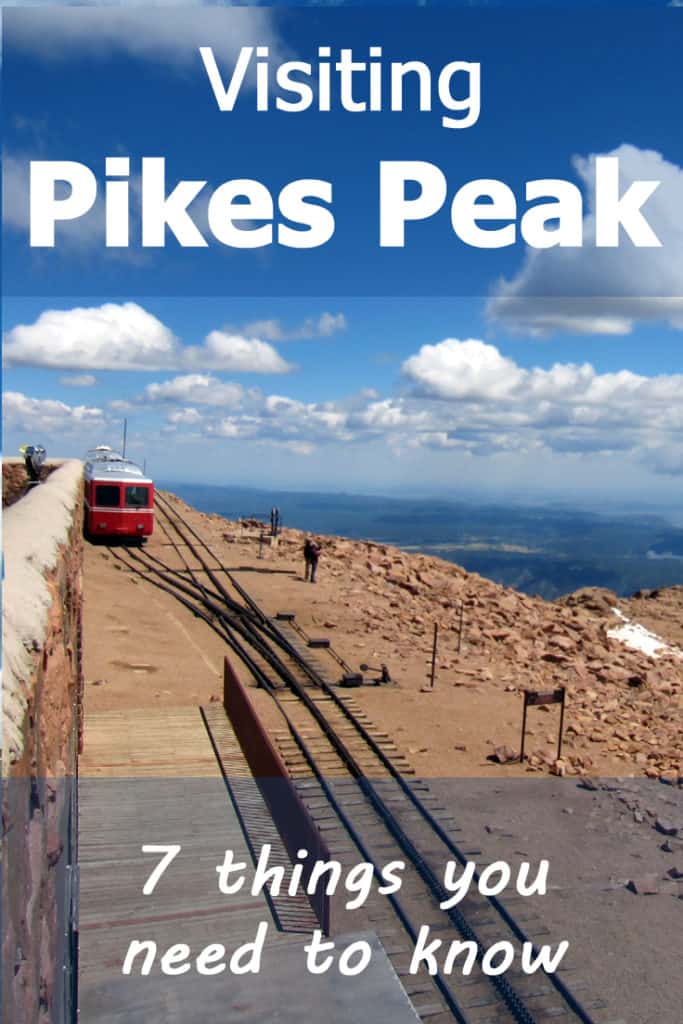 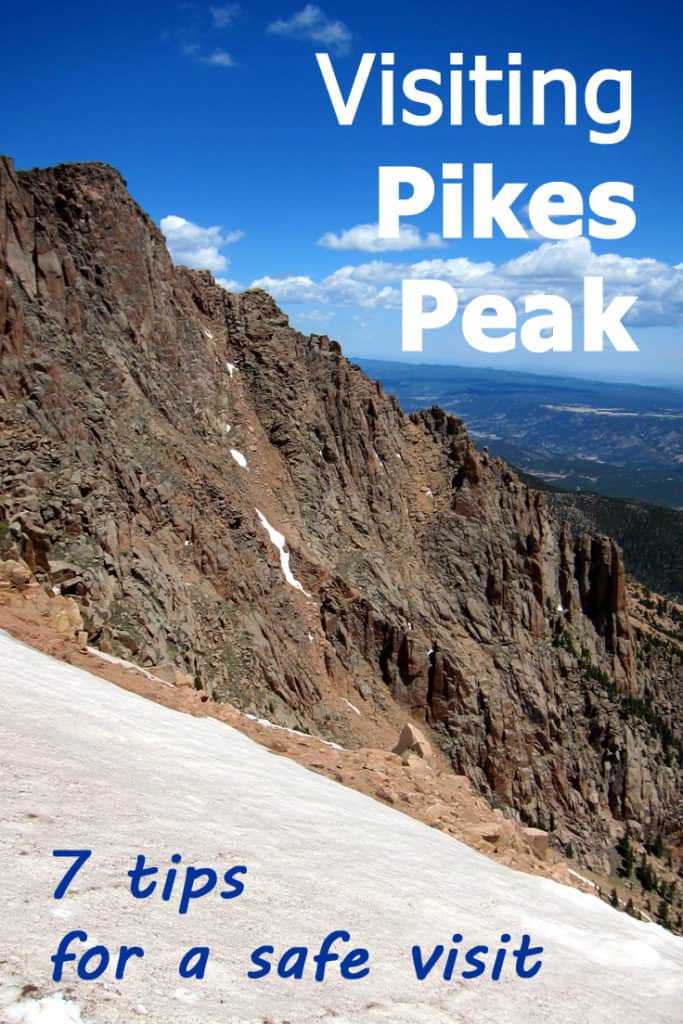 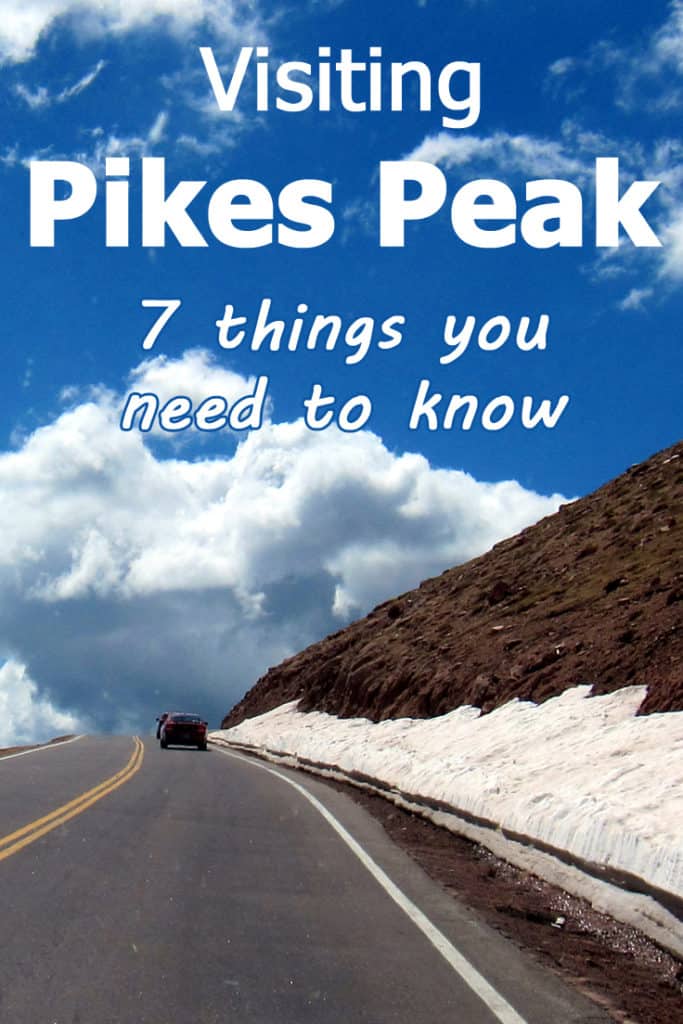 Colorado is famous for its mountains. The Colorado Rocky Mountains are very high, many of the peaks reaching heights above 14K feet. Avid mountain climbers love these peaks, locally known as "Fourteeners".

Many Colorado climbers go for something called "Fourteener Bagging" which is basically climbing to the top of as many of these mountains as you can.

Pikes Peak provides us, mere mortals, with a rare opportunity to bag a fourteener! With a paved road going all the way up to the peak, this is your chance to breathe in some real - and very thin - mountain air.

There are several things you have to know before you go there, though, to make sure your visit is both enjoyable and safe.

1. Pikes Peak is easy to reach

Pikes Peak is in Colorado, fairly close to one of the state's largest cities, Colorado Springs. There's a lot to do and see in and around Colorado Springs, so if you're planning a trip to Pikes Peak, make sure you include at least a couple of days for some sightseeing around town.

Pikes Peak is really close to town. It will take you about twenty minutes to drive from the center of Colorado Springs to the Pikes Peak Highway toll booth.

2. Pikes Peak is an American Icon

In the late 19th century, Pikes Peak inspired poet Katharine Lee Bates to write a song. At first, she named it "Pikes Peak" and later the title changed to "America The Beautiful". This patriotic song, celebrating the beauty of the United States is considered akin to the national anthem and Pikes Peak thus became known as "America's Mountain".

If like us, you're not an American, take a few minutes to read up on the song or at least listen to it here. It will make your visit to the summit all the more special.

When visiting Pikes Peak stop for a minute to appreciate the poem, engraved on a plaque at the top of the mountain - 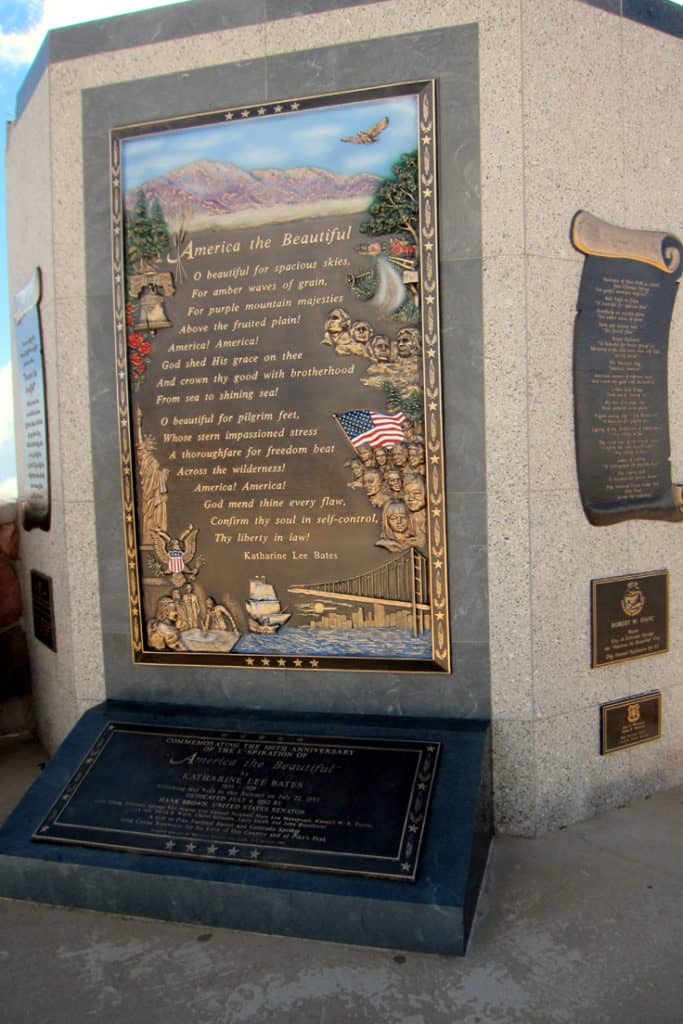 3. This is not a National Park

What that means is that you can't use your annual national parks card to save money. Somewhat ironic, considering the card is called "America The Beautiful" but since you're essentially paying for use of the high-maintenance road, I think that's reasonable.

While there is a small ranger's station along the Pikes Peak Highway, these are Forest Service rangers. A ranger will pull you over on your way down and perform a curtsey check of your brakes. That's what they're there for. Don't expect any ranger programs, an educational visitors center with a movie, or any of the services provided in most national parks.

4. There's more than one way to get up to the summit

Pretty much anyone can "bag" this summit! If you can't make it on foot (and most of us can't), you can drive up there. Can't drive? Take the train!

This is no stroll in the park!

Barr trail is the most popular path to the summit of Pikes Peak. Starting at Manitou Springs it's considered a good trail - good enough for running the annual Pikes Peak marathon.

It would take you six to ten hours to reach the summit and the hike is not devoid of risks (more on the risks of climbing later in this post). The trail is managed by the Forest Service and you can read more about it here.

Driving up the mountain

Obviously, driving is faster and easier than hiking but it can still take a while. The paved toll road may only be 19-mile (31 km) long yet with over a hundred and fifty switchbacks and quite a bit of traffic at times, plan for at least one hour between the toll booth and the summit.

It's a beautiful drive though, so taking it slowly and pulling over occasionally to take in the views is highly recommended. 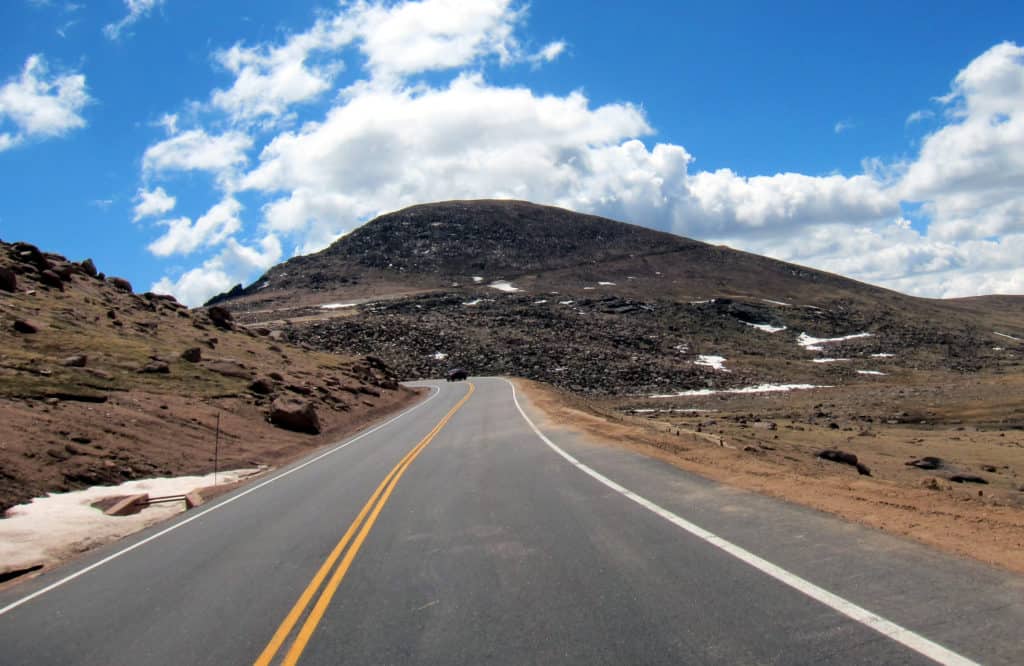 While the road is supposed to be paved all the way through, some areas may be temporarily scraped off for maintenance, especially during spring. Which means you may come across an unpaved road patch.

Don't worry, it should be entirely passable. This is what it looked like when we traversed a "dirt road" stretch along the road back in June 2011. Not too bad, is it? 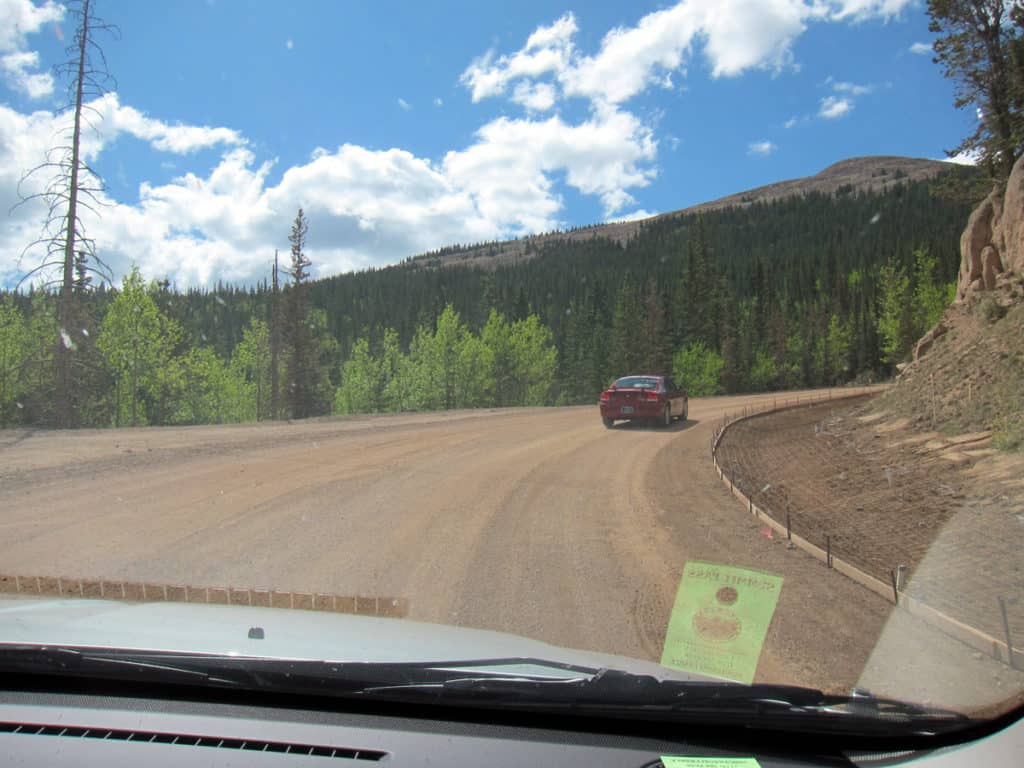 The cost of driving up to the summit and back down is determined by the number of passengers and the time of year. Check the website for current rates. There's no need to make reservations, just show up at the tollgate, pay your fee and drive on.

The cog train will slowly pull you all the way up, then take you down. The journey lasts a total of three hours and ten minutes and you also get half an hour at the top to enjoy the views.

Check their website for all available rates and timetables.

5. Climbing up Pikes Peak on foot can be dangerous

Some Fourteeners are easier to climb while others are more technical. They are all challenging - and potentially dangerous - for a novice.

This is not simply a "difficult hike". At these altitudes, you really need to know what you're doing. The combination of altitude sickness and mountain weather can be deadly and every year, the Colorado peaks claim the lives of a dozen or so climbers.

While Pikes Peak isn't considered a technically challenging Fourteener, you should not attempt to climb it on foot unprepared. You should be very fit, acclimated to heights, and prepared for the weather.

And by weather, we're talking about a potential difference of 40 degrees between the trailhead and the summit. Setting out on a hot summer day doesn't mean you can spend your time at the summit in shorts and a tee. It can even snow on the summit - any time of the year! Dress accordingly and don't forget to carry plenty of water.

Being prepared for the climb can literally mean the difference between life and death. If you're thinking about climbing on foot, do yourself a favor and read up everything you can about climbing the Fourteeners of Colorado, including this particular summit.

If you're  into that sort of thing, you can even race up the mountain...

Two races are held at Pikes Peak every year. The first is the Pikes Peak Ascent in which runners race along the Barr trail all the way to the summit. If you decide to keep running your day down as well (same route) then you'll be running the second event: The Pikes Peak marathon. You can find more information about these events here.

4. Driving up Pikes Peak can also be dangerous

This road has a history of road accidents, many of them fatal. The good news? These mostly happen during races.

Having driven this road myself, I'm amazed that some people are crazy enough to try and race it up to the top, but hey, there was never a shortage of "crazy" on this planet.

The Race to the Clouds is the annual Pikes Peak motorized race. Officially, it's called Pikes Peak International Hill Climb.

What about regular driving though?

Assuming you're not racing up the mountain, driving up the road really isn't that bad. The road is wide, paved, and well-maintained.

Dozens and dozens of switchbacks mean the grades are manageable for pretty much any kind of vehicle. Just slow down at the curves and you should be just fine.

Going down, avoid using the brakes by downshifting to the lowest possible gear and letting the engine do the braking for you. If your car has both 1 and 2 marked - choose 1.

You have to though because if you use the second gear, the steep grade is going to force you to touch your brakes at each one of the countless switchbacks and your brakes will heat up.

I know that because that's what happened to us. I was sure I was doing fine switching between first and second gear on our way down.

Fortunately, there's a ranger that stops you on the way down, about halfway along the drive, to check your brakes. He put his thermometer under our minivan and let us know that our brakes were heating up and we had to pull over for 15 minutes to let them cool.

We weren't the only ones who had to do that. So, unless you want to take a nice long break in the middle of your drive, use only the first gear. 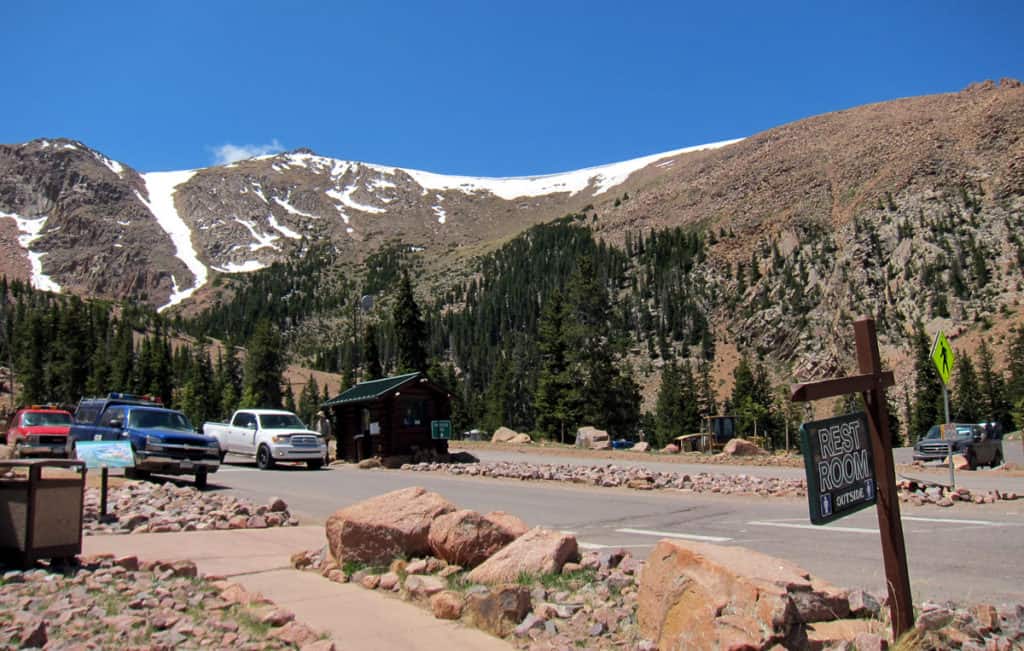 5. The weather can be challenging

No matter how you get to the top - via car, train or on foot - it can be very cold once you're up there. If you check the weather, you may notice that it usually doesn't go below freezing point in July and August - not even at night time.

That's a bit misleading though because the winds at the summit add a significant chill factor. We visited on a sunny day in late June and still had to wrap up the kids and ourselves, using every layer we could find in the car. 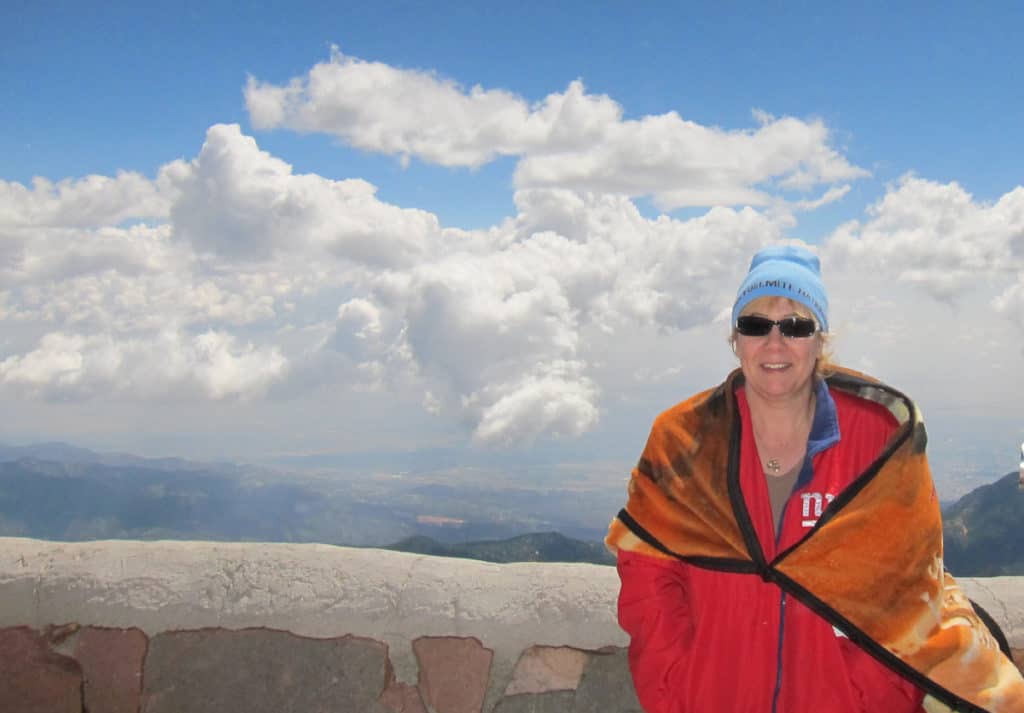 6. It's high enough to get altitude sickness

Unless you're acclimated to this altitude, you're bound to feel the effects. The air is thin at the summit and holds about 60% of the oxygen your body is used to.

Prepare to feel out of breath as soon as you get out of your car. Ten minutes into our stay at the summit, I began to feel dizzy whenever I turned my head.

If you have any medical problem which could affect your breathing, ask your doctor before visiting the Pikes Peak summit. You should also follow these guidelines -

7. There really isn't a whole lot to do at the top

Once at the top, you're there to experience the magnificent views and the altitude. That takes about ten minutes, maybe fifteen. Climb up to the observation deck where you'll find the "America The Beautiful" monument. Take in the views. Go around the summit house and take more pictures.

There is no actual visitor's center but you can and should visit the small restaurant at the Summit House. They're famous for their high-altitude doughnuts and trust me, hot chocolate is extra yummy at the summit!

So, should you visit Pikes Peak?

Absolutely! If you love road-tripping this one should definitely be on your Bucket List. An awesome drive that gives you a chance to visit one of the most iconic summits in all of the USA for views from the top of the world. What's not to like? We loved it and I'm sure you will as well!

Have you been to Pikes Peak? Did you drive up there, or did you take the train or maybe hiked all the way up? If you've never visited, I'm curious to know which would be your favorite form of ascent, so leave me a comment and let me know!

15 Historical Sites In Brooklyn You Should Visit

What To Do At And Around Fairhope Municipal Pier