We'll be in Berlin in early April and it's time to come up with some form of itinerary! I've started by making this "cheat sheet" for visiting Berlin with kids. Here's a list of 18 landmarks, parks and museums for a family visit to the German capital! 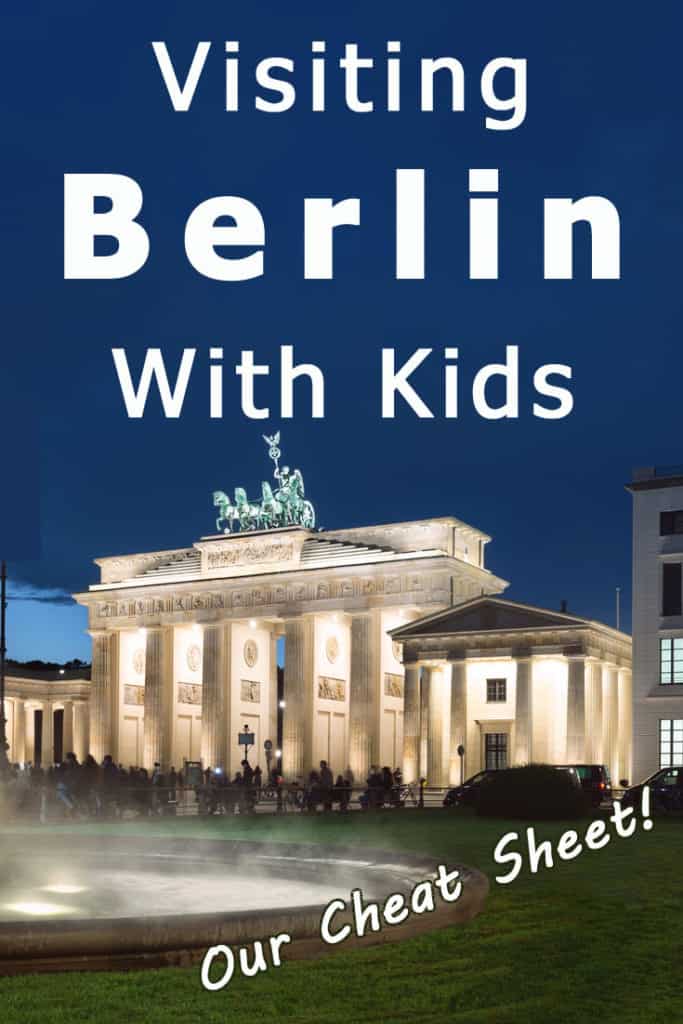 We've never been to Berlin or Germany, so this is terra incognita for us. Lots of recommendations around, of course, so I've been using these to create our own list of things to do in Berlin. I've put everything together in a single blog post that will be my own cheat sheet when planning our itinerary.

How to use this cheat sheet

This "cheat crib" includes the list of places we'd like to visit - landmarks, museums, parks and points of interest - along with addresses, opening hours and admission costs. Locations have been noted on a map as well, to make it easier to see "what goes with what".

Note that I said "places we'd like to visit". This is by no means a comprehensive list of things to do and see in Berlin - I suspect would require a thick book! So, what's included and what's not? Let me tell you a thing or two about our own criteria, so you can see how well they match yours.

We're traveling with our two boys, aged 13 and 15. While we are interested in the history of Europe and Germany, we prefer not to expose our kids to very graphic displays at this point.

Our kids are home-schooled, so we do see this visit to Berlin as an opportunity to teach them more about World War 2 and the cold war. It's just that we just don't want to traumatize them. We'll have to find the balance in the overall itinerary but for now decided to avoid places like the "Topography of Horrors" display, the Stasi Museum or the "Palace of Tears".

This is our first visit to Berlin

With so much to do and see in and around Berlin, we want to stick to the main and central attractions. That's why some attractions that are located away from the center of Berlin were not included here (even though they may be really awesome for families with more time on their hands).

I didn't include closure dates unless they were a regular day of the week. If you're visiting during a holiday, check the websites to see if opening hours change. Also, rates and opening hours can change, so check before you visit (that's why I linked to the websites!)

With that in mind, I hope you'll find our cheat sheet helpful! Here goes...

Landmarks & Points of Interest in Berlin

This huge edifice has fascinating a history that echoes that of Berlin and of the modern German people itself. 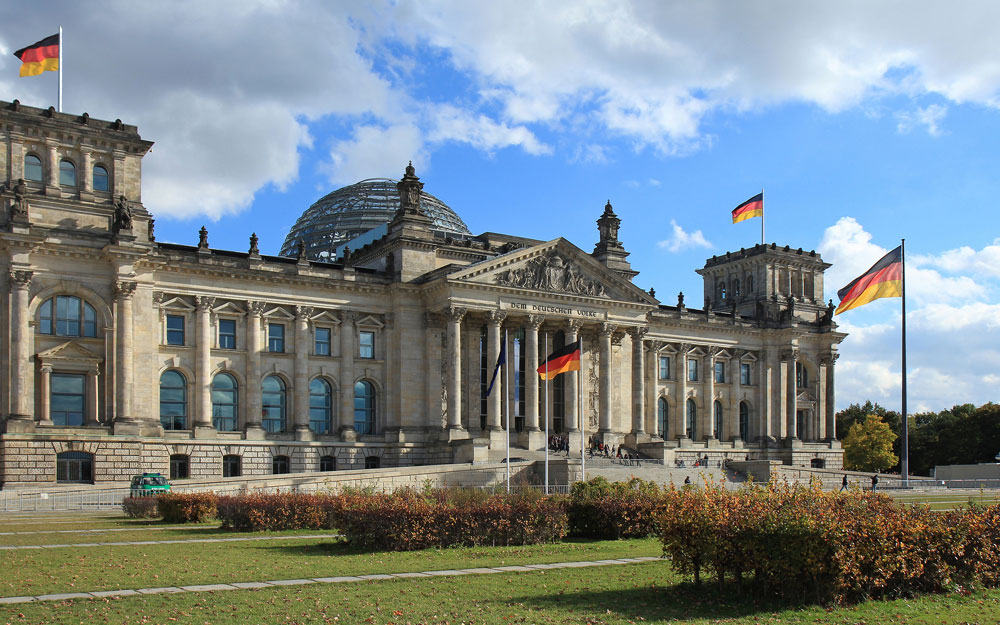 Built in the late 19th century, it was the beating heart of German empire for decades. This is where the fragile German democracy of post-WW1 fell into the hands of the Nazi party, as the Reichstag building became the seat of Hitler's Third Reich. After the end of the second world war, the building was abandoned and left in ruins until Germany was reunited in 1990. Finally, a decade later, after intense re-building and reconstruction, the Reichstag building reclaimed its former glory when the German parliament - the Bundestag - made it into its official home in 1999.

The reconstructed dome of the Reichstag building is made of glass. This is both a symbol of the transparency of the government's work and a great viewing platform from which you can see Berlin all around you. 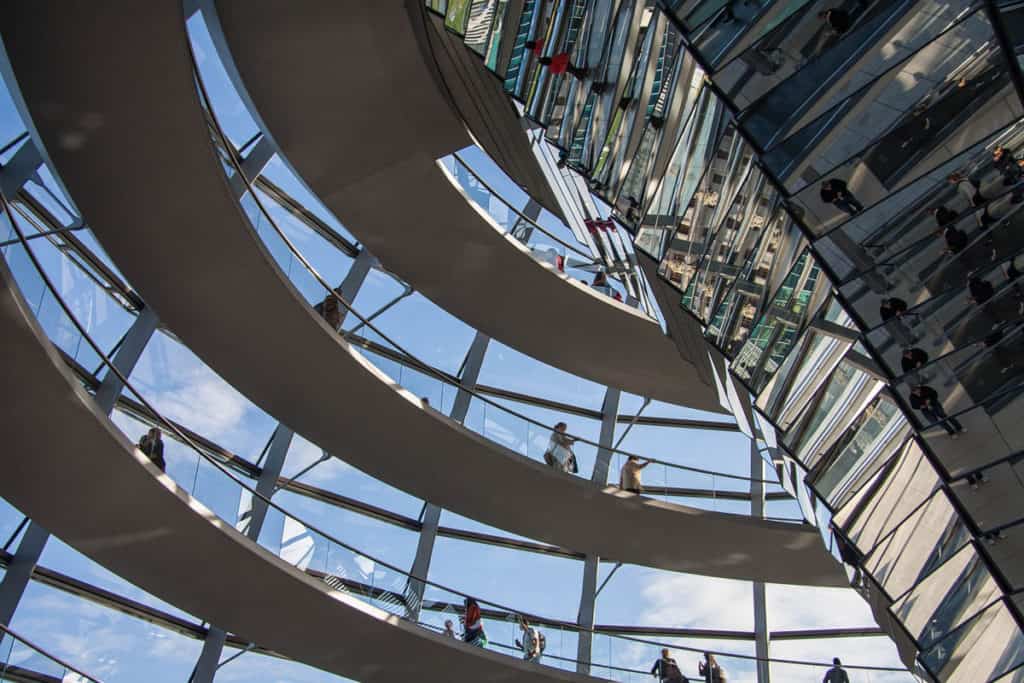 How to see the Reichstag Building

The Brandenburg Gate is a classical 18th century monument and major historic landmark that's well worth seeing, even when visiting Berlin with kids. 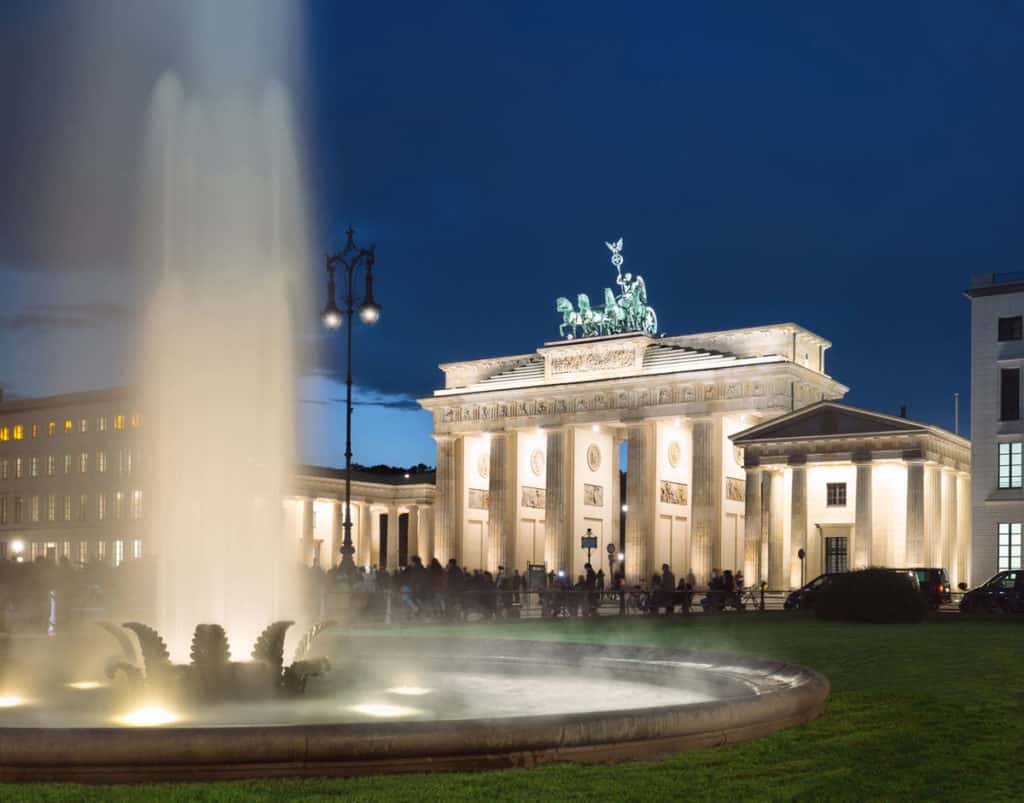 3. Memorial of the Berlin Wall

A memorial that tells the story of the victims of the city's division and the tyranny of the GDR regime. This is where you can see a  section of the original wall (60-meter/200 ft long). There's also a visitor center, a documentation center and a small church called The Chapel of Reconciliation.  Visiting Berlin with kids, we think this could be a good educational site to see.

Opening hours for the visitor center are are Tue-Sun 10am-6pm. The open air exhibition and memorial grounds are open throughout the week 8am-10pm. Admission: free.

Officially named The Memorial to the Murdered Jews of Europe, this huge remembrance site consists of 2,711 slabs of concrete covering  4.7 acres.

Like many German monuments, the Berlin Cathedral suffered major damage during WW2 and was in ruins for decades later. It was gradually reconstructed and renovated during the second half of the 20th century. 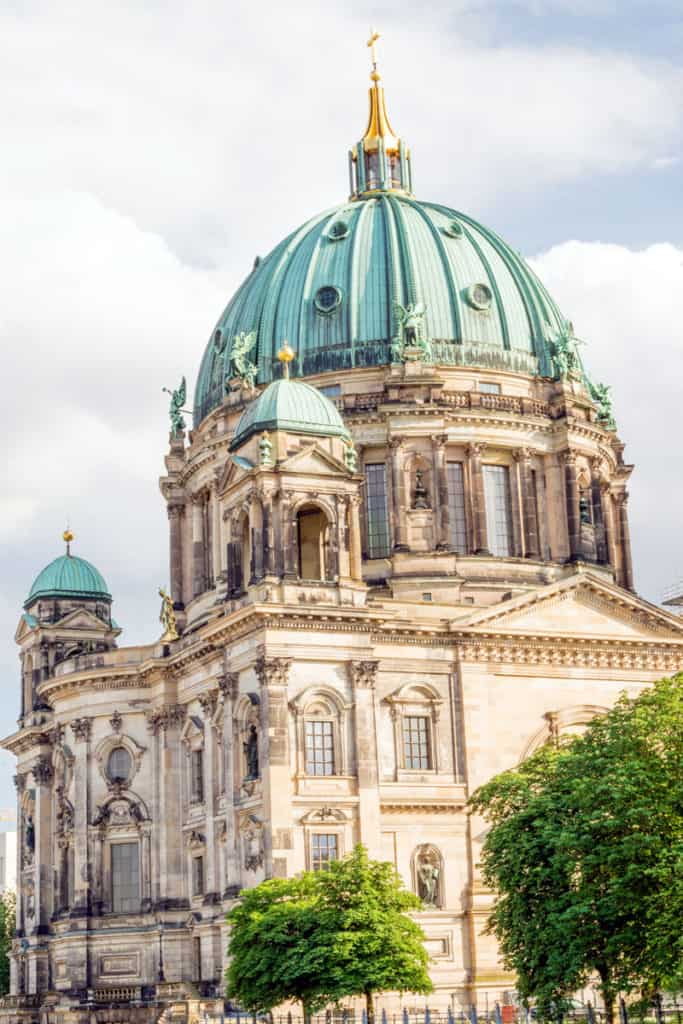 An open-air gallery showcasing a permanent display of paintings by international artists - all of them painted on what used to be a part of the Berlin Wall. The section of the wall is almost a mile long - 1.3 km  - featured no fewer than 105 paintings by various artists. Nowadays, part of the gallery wall is fenced off due to vandalism.

This historical monument stands 67 meters (220 ft) tall, from the bottom of its base to the crown on top of the golden statue of Victoria. If you're up for it, you can climb the 270 steps to the observation deck for a view of the city. 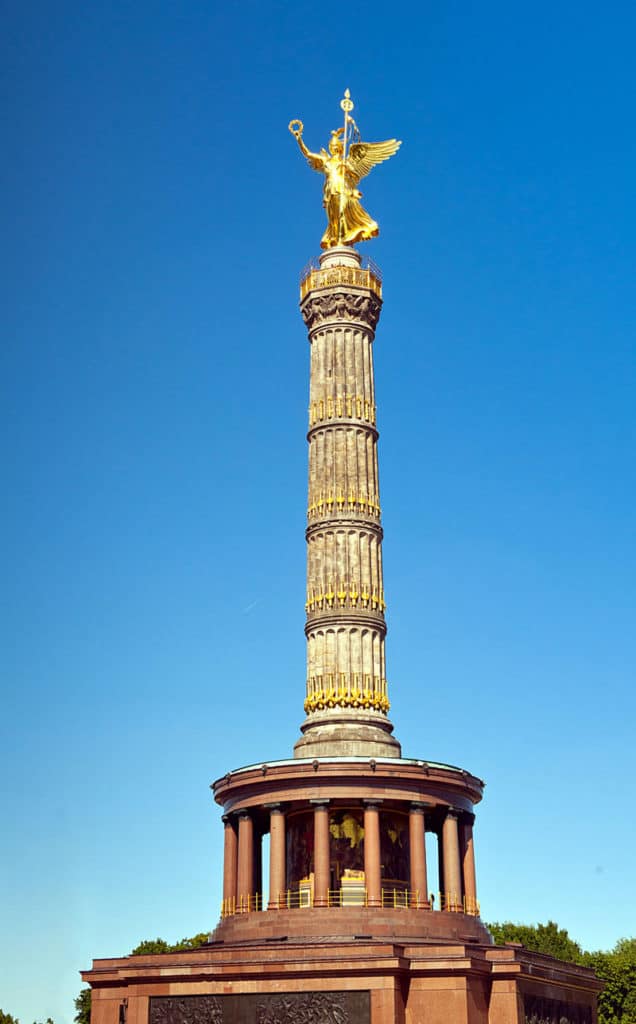 The most famous of the three checkpoints that connected the western and eastern part of Berlin, Checkpoint Charlie was where non-Germans crossed the border on various political missions. It was right here where American and Soviet troops faced each other on both sides of the wall for 28 years.

More than a quarter of a century after the fall of the wall, there's an open-air exhibition where Checkpoint Charlie used to be.

The observation deck at the top of this 207 meters high tower offers panoramic views of Berlin. There's a bar and a restaurant at the top too.

Opening hours: March-October 9am-midnight (opens at 10am the rest of the year). Admission: Starts at 13 euros for adult (8.5 euro for kids). Fast track tickets available online.

Known locally as Großer Tiergarten, this is Berlin's most popular park. The park's 520 acres are home to the Berlin zoo as well as to numerous English gardens, ponds and streams. Centrally located, it's the one park no tourist misses out on.

Tempelhof Field/Park is an abandoned airport, turned into a recreational park. If you ever dreamed of skating or cycling on a runaway, this is the place to make your dream come true!

WW2 bombers flattened this area and made room for a new tall and shiny buildings. Germany made use of that room in the 1990's to create a modern-looking plaza filled with tall and shiny glass buildings.

This large urban square in the center of Berlin was part of East Germany until 1990. Today it's a lively open area in the city, with restaurants, shops and street vendors.

Museum island is a complex of five museums located on the northern side of an island of the Spree river in Berlin. 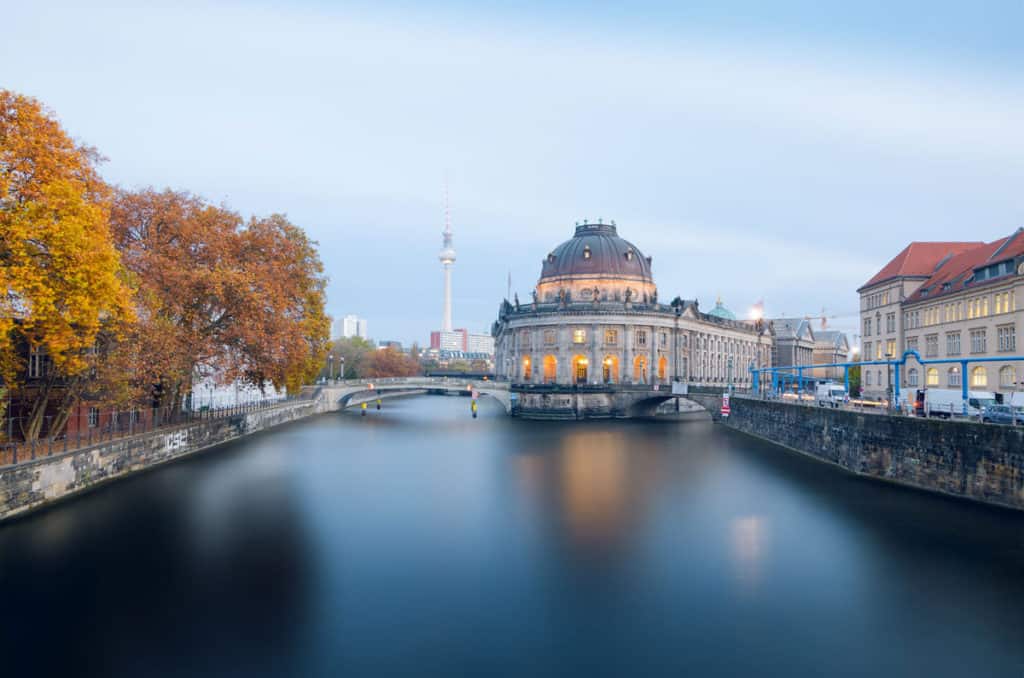 The five museums are -

The most visited of the five is the Pergamon museum, so if you only have time (or patience) for one museum, this is the one to go to. The Pergamon is famous for housing life-size reconstructions of famous ancient monuments including the Pergamon Altar, the Market Gate of Miletus and the Babylonian Ishtar Gate .

Germany featured so prominently in some of the most horrific events of the Twentieth century, it's easy to forget that the country's history goes way back before that. Fortunately, the German Historical Museum provides visitors with an overview of Germany along the ages.

Another good museum for spending a rainy day, complete with dinosaur skeletons and a huge selection of stuffed animals.

And now, the map!

Here's an interactive map showing all of the places in this list. If you click on any of the place markers, it'll bring up a menu with more details about the location. You can also click on the icon in the top left icon for a list of all of the place. Then click on any name in the list to highlight the correlating marker on the map.

I'd love to get feedback on this list. If you think we missed out on something that's central and kid-friendly, let me know in the comments! Any other kind of feedback or question is welcome too!

Top 10 Things to Do in Prague (Including a Map)