Israel is a self-proclaimed culinary superpower with a variety of local Israeli dishes. You simply have to try the local falafel and hummus (it's nothing like what you might find in your local supermarket) and there's just so much more. Here are my suggestions for five signature Israeli dishes you really ought to sample when visiting. 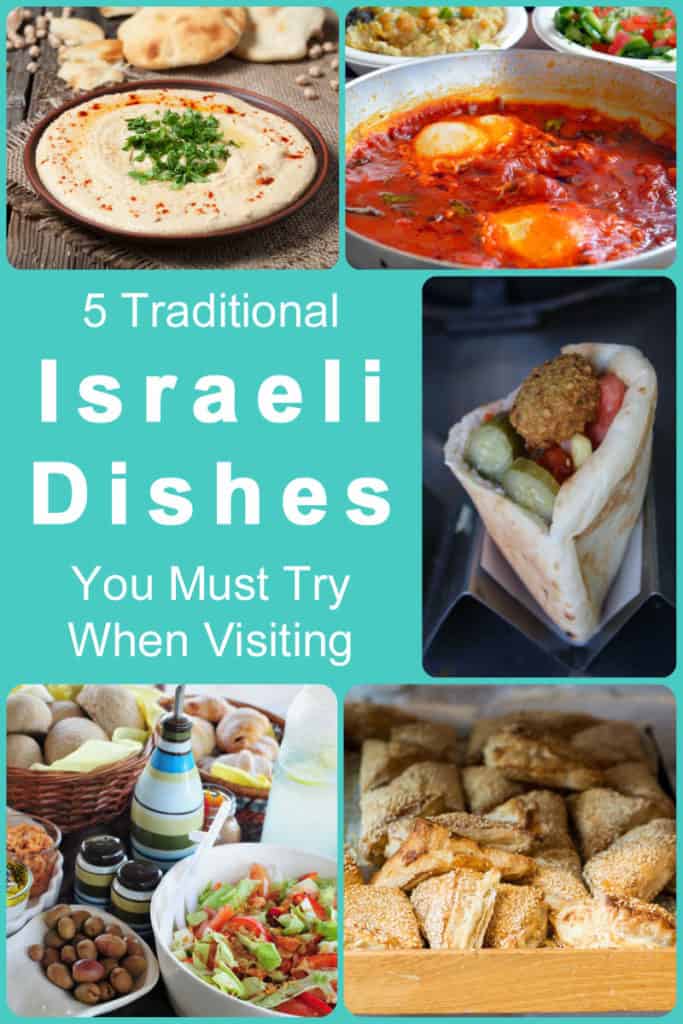 Israel brings together Jewish immigrants from all across the globe which means there's a variety of cuisines for you to sample during your visit. Looking for a Russian restaurant? The city of Ashdod (and others) has a huge selection. Need a Moroccan or Tunisian fix? Try the markets of Netanya. And if you want, Tel Aviv is filled with excellent chef restaurants that cater to every culinary tendency and fantasy.

When we travel, I like to sample local cuisine. With the kids in tow, we usually stay away from fancy restaurants. Instead we like to try street food and low-cost eateries that serve local signature dishes. If you're like us, you should definitely try out these uniquely Israeli dishes:

Probably the dish most associated with Israel! It's so local that when the movie "Cloudy with a Chance of Meatballs" was shown in Israel, the title was translated to "It's Raining Falafel Balls".

What to expect: Round, fried patties, the size and shape of meatballs. Entirely vegan (they're made of ground chickpeas and seasoning). They may be greenish in color if ground with herbs (usually parsley and lots of it) or they may be yellow inside. Usually served as excellent street food in a pita pocket, along with salads, fries and tahini.

Where to get it: Most Middle-Eastern/Arab restaurants serve a few balls on a small plate as an appetizer but the real deal is definitely the pita pocket filled to the brim with falafel and salads.

The sellers are often fun to watch as they make these pita pockets very fast and with their own personal flair. They'll ask you if you want them to put hummus, salads and fries along with the falafel balls and even then, you usually get the opportunity to keep stuffing more salads into your pita pocket. Watch out, it is delicious but you could end up with dripping tehini sauce all over your face and shirt.

How much should it cost: While there's one cheap place in Tel Aviv that still offers Felafel for 5 shekels (that's just over a dollar), almost everywhere else expect to pay 15-20 shekels. That's up to $5 and it's considered a full meal, so not a bad deal.

This creamy paste of ground cooked chickpeas with tons of tehini is the Falafel's contender for the title of "the king of Israeli dishes". Of course, if you ask a Palestinian he'll tell you hummus is a local Arab dish that the Israelis annexed 😉 Leaving politics aside, you should definitely give hummus a try. 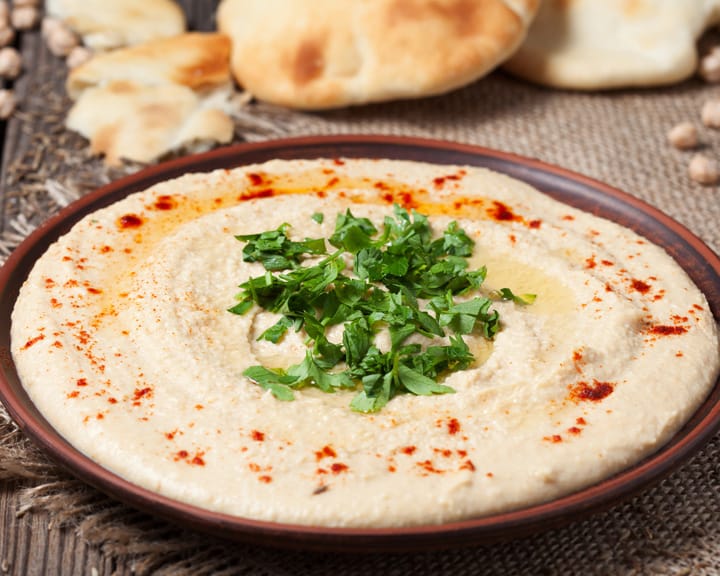 What to expect: A small bowl or plate with creamy warm fresh hummus. Freshness is key here, so make sure you go to a lively and busy eatery that specializes in hummus.

Almost always, there's a small puddle of quality olive oil in the middle, along with some parsley and seasoning. In many places you can order toppings with the most common ones being fried mushrooms, roasted pine nuts, or cooked ground beef. You can also get a hardboiled egg or fresh (!) onions with your hummus.

Unlike what you see in US supermarkets, the hummus itself should be clear of any additional flavorings. No one in his right mind would ever serve you hummus with peppers ground into the paste. And avocado and hummus together? That would be blasphemy to both Jews and Arabs in Israel. An affront to Israeli dishes.

Your hummus will always arrive with fresh pita bread. Feel free to do as the locals do: tear up pieces of your pita and wipe the hummus off the plate with it.

Where to get it: You have to sit down for your hummus, so it's not considered a street food in the sense falafel is. You can get it as a starter dish in any Middle Eastern restaurant or you could look for a type of restaurant called "Humussiya" where they serve nothing but fresh hummus with toppings.

How much should it cost: This really depends on where you get it. Usually anything between 20-40 shekels ($5-$10) is a reasonable price.

Shakshuka is the local name for one of the most popular Israeli dishes. It's a couple of eggs, served sunny side up, that are cooked on a paste made of tomatoes and peppers.

What to expect:  Shakshuka is a bit like warm salsa but different. The base sauce is what makes a good shakshuka and it almost always includes onions, garlic, peppers and of course tomatoes (no tomatoes? no shakshuka!) It's often served in the pan (watch out - it can be hot!) and with lots of fresh bread which you dip into the sauce and eggs. The seasoning can differ from one place to another and it could be very hot and spicey so check with your waiter if you don't like spicy food.

Where to get it: Many cafes serve shakshuka for breakfast so this is your best bet. If you're staying with friends or family, you can always ask them for their own family version.

How much does it cost: Cafe's aren't street food. Depending on location (on the beach, for example), a Shakshuka breakfast can be anything between 40 and 80 shekels ($10-$20).

This savory pastry is one that every Israeli knows. It originates in the balkans so if you traveled in Turkey you probably know their version of it. Bulgaria and Greece have similar pastries as well.

What to expect: A puff pastry which comes in a huge variety of fillings. You can buy small ones in bulk or a single large one to eat as a meal. In which case, you can ask the server to add a hardboiled egg inside your bourekas (not a bad idea, to add some protein to all that fat and carbs!).

The locals know which filling to expect by the shape of the bourekas. Triangles are almost always filled with cheese and rectangles with potatoes. The ones with poppy seeds on top usually contain mushrooms.

Where to get it: Your best bet is bakeries. Every bakery has at least two or three types of small bourekas which you can buy in bulk. Usually you can mix up several types in a bag. There will be notes in Hebrew next to each type and you can ask other shoppers to translate them for you. You have to try the potato and cheese fillings (classics) but if you can, try the mushroom, spinach and pizza fillings too. Bourekas are also available in the small bakeries inside supermarkets.

How much does it cost: You pay by the weight. Usually around 30 shekels per kilogram (roughly $4 per pound). The fancier the bakery, the more expensive.

Israelis are huge breakfast eaters and you'll be shocked to see just how healthy an Israeli breakfast is. The Israeli breakfast is an homage to the tradition of the farmers of the kibbutzim. These hard-working men and women would go out to the fields at dawn, where they would work for a few hours. Then they would all go to the communal dining room to share a humble breakfast of fresh vegetables, a boiled egg and some cheese or yogurt.

What to expect: Today's Israeli breakfast is not as humble. It is still fairly healthy though. Your breakfast will always include a salad, usually the traditional one made of finely diced cucumbers and tomatoes. There will usually be several types of cheese including both hard cheese and low-fat cream or cottage cheese. Eggs are another staple food and your waiter will ask you how you prefer it made. Expect a bread basket with some butter too and almost always fresh juice. Many places will add to this, offering small dishes of tehina, jams, olives and other delicious foods to munch on.

Where to get it: Most cafes and restaurants will serve you an Israeli breakfast. Choose a place with a view, if you can, and savour every bite while enjoying the sights. If you're saying in Tel Aviv or one of the many beach towns, the cafes located on the beach are a great place to have your Israeli breakfast at.

Have you tried any of these Israeli dishes? Did you like them? Let me know in the comments section below! I'd love to hear your opinion of these five signature Israeli dishes, or any other typical local food you've tried.

Holidays in Israel and How They Can Affect Your Travel Plans

9 Awesome Things to Do in Akko, Israel (Including a One-Day Itinerary)