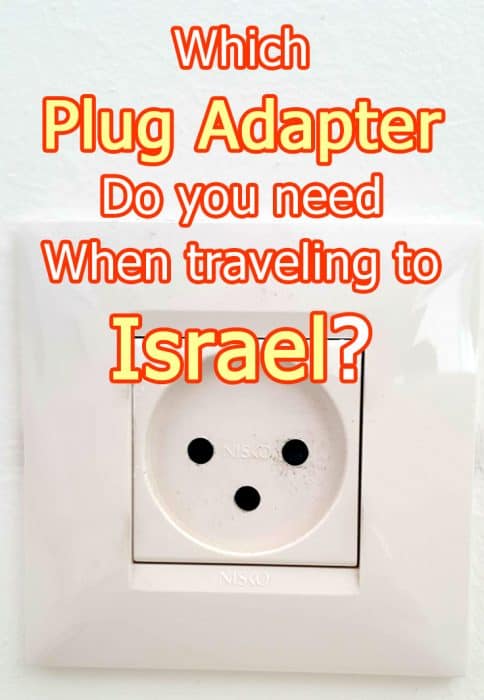 Planning a trip to Israel and not sure about outlets, plugs, adapters, and converters? I prepared a detailed guide with photos which will help you pack the right adapter/converter for your trip - and save your appliances.

The short answer is:

Visiting from the US or Canada, you need a device that's both a plug adapter specifically made for Israel AND a voltage converter. Coming from Europe or other countries that have 220-230 voltage systems, you only need a simple plug converter.

Don't worry, it's really not that complicated and I'm going to help you out by providing links to the exact products you need to get from Amazon. In fact, in case you're in a rush, here they are.

If you come from a country with 110 voltage system (such as the USA), buy this model (Amazon link):

It comes with several plug adapters, including one that will work in Israel.

If you come from a European country with a voltage span of 220-240, you only need a plug adapter like these (Amazon link):

If you have a few minutes and are looking to learn more, keep on reading.

Plug adapter vs. voltage converter - what are they and which do you need?

Adapters and converters are different things. You may need just the one or both - rolled into a single device.

The shape of electrical outlets or sockets varies across the globe. Strangely enough, in 2018, humanity still hasn't decided on a single type of socket. In fact, according to Wikipedia -

Which means travelers need to adapt to local settings. Using adapters, at the very least.

Adapters are simply a way to get electricity from an outlet with a different shape into your device. Nothing more.

If you're coming from the US, Canada, and most other countries, you would need an adapter just so that you can plug something into an Israeli outlet.

What plugs are used in Israel?

And these are the plugs that match them - 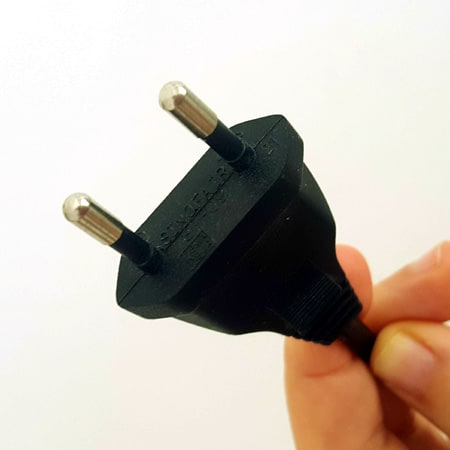 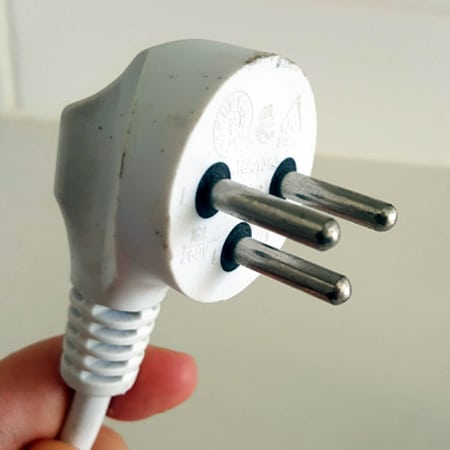 If your plugs look like this, you're set. This may be the case if you're from Italy or a few other European countries (though not most).

If your plugs look different, you need a way to make your plug fit into an Israeli socket. The adapter itself is a very simple (but don't buy it just yet if you're from Canada or the US!):

Here's a link to buy this on Amazon - if this is all you need.

But is that all you need? Hold your horses and let's talk about converters.

Israel uses a 220v voltage system across the country. So do most European countries.

Some electric appliances are suited for use in both systems. Others will only work well in one in one of the systems.

If you have electric appliances that run only on 110-120 volts then a simple adapter won't be enough. An adapter only handles the shape of the plug - you need something that will convert the current as well.

And that's the voltage converter.

These are larger and heavier than simple plug adapters and they usually have several sockets, allowing you to use multiple appliances. You can find a variety of these in Amazon. Planned with travelers in mind, they offer a few plug adapters as well. The problem is finding one that's a good fit for Israel. This one is the only one I could find, offering both a converter and a plug adapter for Israel:

As you can see, it comes with five different plug adapters, so they have you covered pretty much anywhere around the globe.

What happens if you plug a 110v appliance into the Israeli 220v system without a converter?

If you plug in a US-bought appliance into an Israeli socket - using the simple adapter - you could end up damaging it.

It's worth noting that some appliances are actually already adapted for both 220v and 110v systems. Check yours to see if it is. If so, you can use a simple adapter and safely plug it into an Israeli socket.

However, if your electric thingie wasn't built to deal with 220volts - it will burn off. I don't mean literally go on fire - although that too is a real risk. Most likely, whatever engine it has will just heat up and stop working.

We bought a cat fountain on our last visit to the US. Brought it back home, filled it up and plugged it into the Israeli system. We should have known better - I blame jet lag! It seemed to be working ok but the following morning the pump was dead.

To avoid that, you simply must use a voltage converter as well as an adapter.

So, if you're asking yourself "Can I plug my iPhone into 220v and charge it in Israel?" the answer is -

Only if you use a converter.

And I'm mentioning iPhones here because people destroy their expensive Apple chargers for making the mistake of using a simple adapter without a converter. And here's another tip for you -

iPhone chargers are very expensive in Israel. Plus, the one you'll buy here won't work well with the American system once you get back home. Keep your iPhone charger safe and use a good converter when visiting Israel.

What happens if you plug a 220v appliance into the American 110v system without a converter?

Ahh, I can tell you the answer to that one from experience as well.

Whatever you're using, will work - but much less effectively. That's actually the case whether or not you use a converter. These appliances need 220v and they won't be getting them from the American system.

If you plug in an "Israeli" electric kettle into an American outlet, it's going to take ages to boil water. If you try the same with a hair dryer, you'll get a measly blow of warm air coming out. It's like an astronaut walking on the moon - everything just becomes lighter and weaker.

The plug shape is pretty much an Israeli thing. As far as I know, only Italy and Russia use a similar socket/plug shape.

As for current - most countries in the world use the 220-230v system. Canada and the US are the exceptions - using 110v.

So, when you invest in buying a quality adapter-and-converter-in-one, it will serve you during your trips across the globe. A worthwhile investment for sure!

What to Wear in Israel: 9 Essential Tips from a Local