Visiting Israel? How about including a fascinating archeological site that's conveniently located only an hour away from either Jerusalem or Tel Aviv? Beit Guvrin is a UNESCO World Heritage site and National Park, that you can enjoy visiting any time of the year, as most of your visit will take place in nice cool caves. We visited Beit Guvrin many times, so let me show you what a gem of a place this park truly is and give you a few tips about your own visit here. 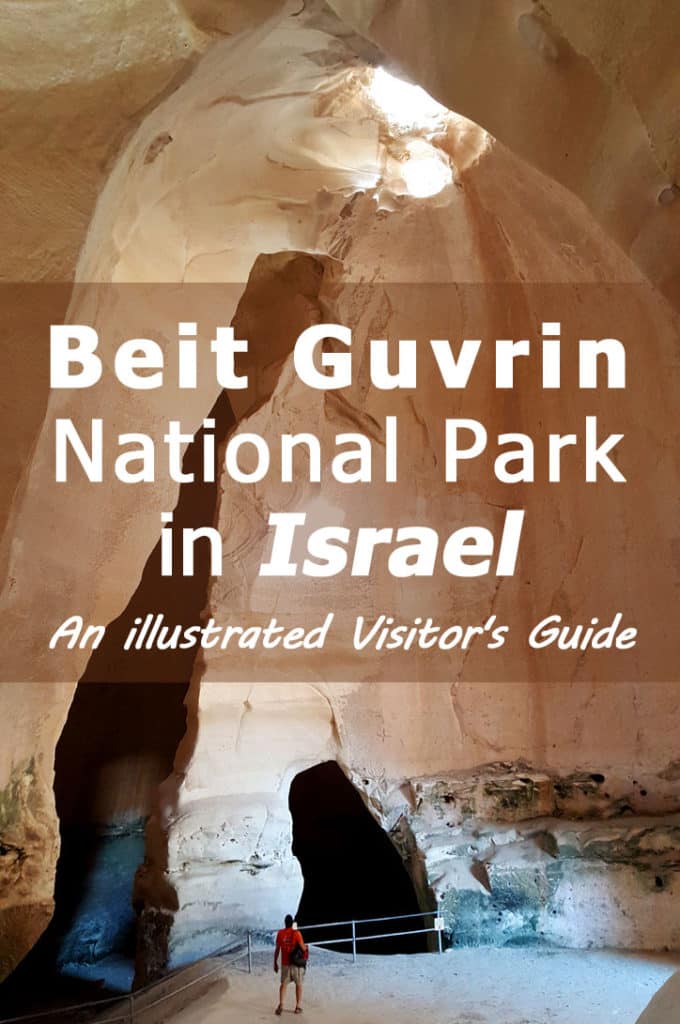 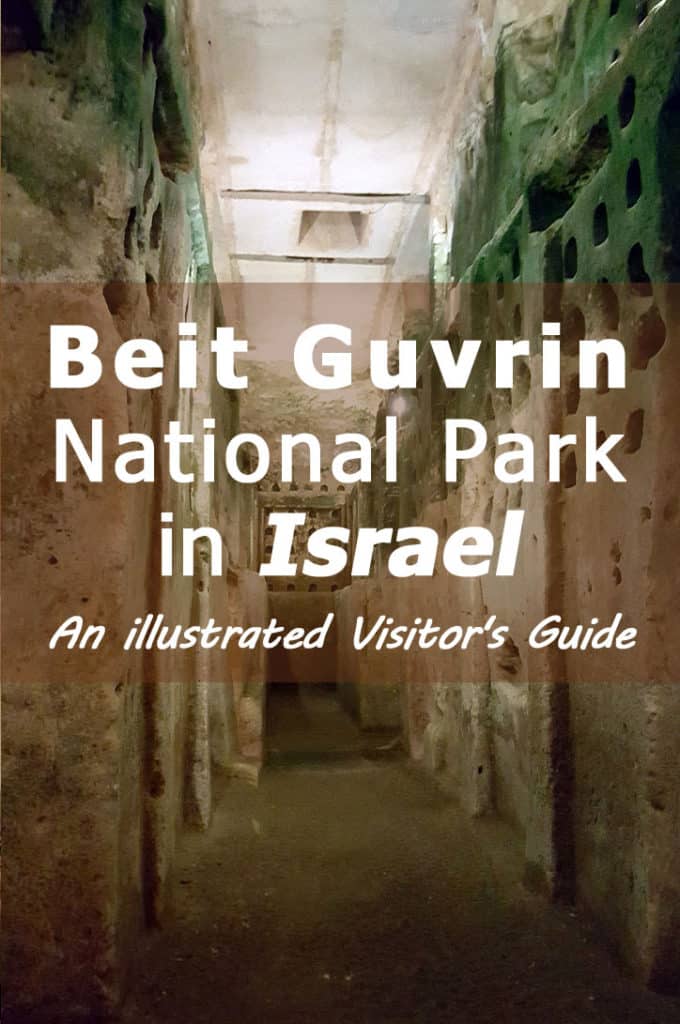 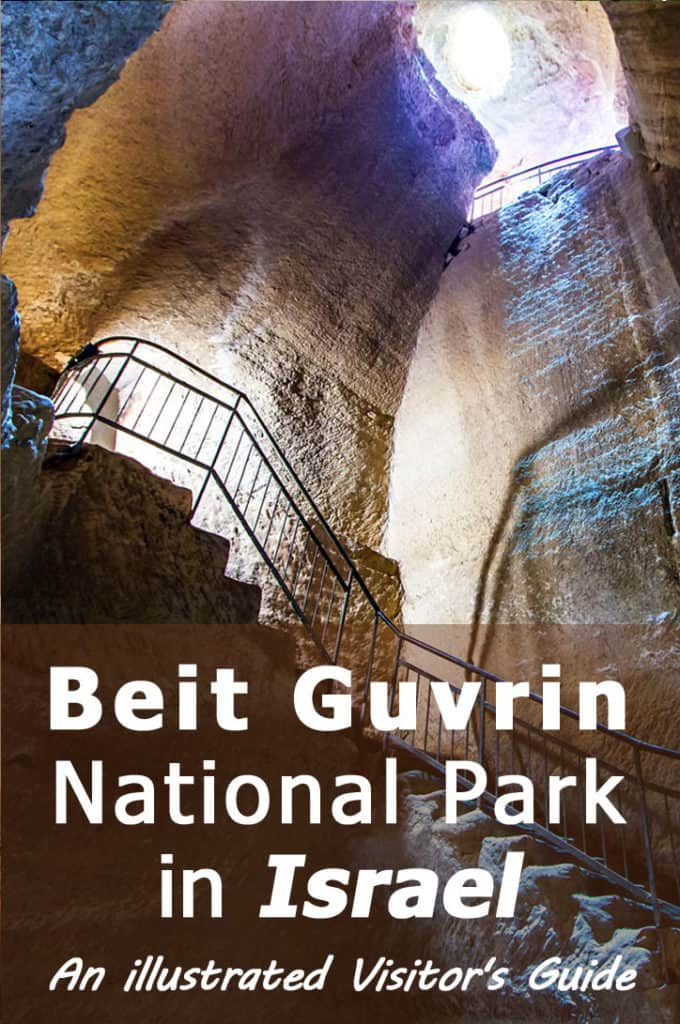 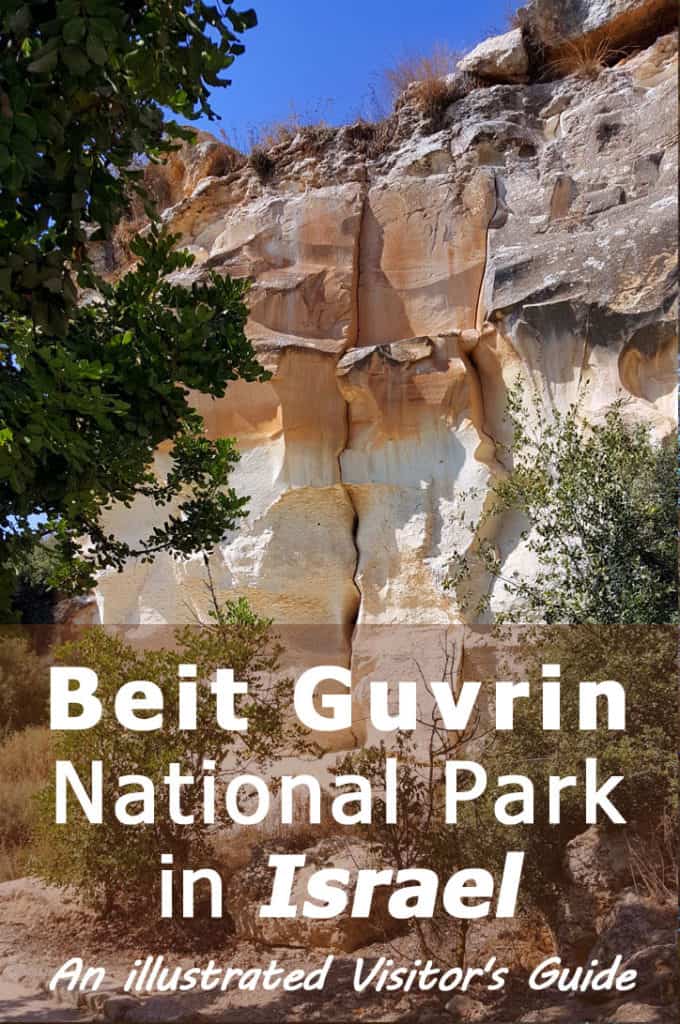 What's Beit Guvrin all about?

This national park is all about caves. Manmade caves, to be exact, so this is in fact an archeological park. That said, some of these caves are so huge there's quite a natural feel to them.

These are the excavated remains of Maresha, a Biblical city first mentioned in Joshua 15:44. Maresha was part of the original Judean Kingdom and changed hands as various foreign armies invaded the area. The Parthians were the ones who demolished the city during in 40 BC and it was soon replaced by the nearby town of Beit Guvrin as a the chief settlement of the area.

What to see and do at Beit Guvrin National Park

The park is divided into a southern area and a smaller northern site. Most of your visit will be in the southern area, where the caves are. The northern part, right by Kibbutz Beit Guvrin, is where you'll find recently excavated ruins, including a Roman amphitheatre, a bathhouse and a small crusader's fortress.

This particular sport is where school teachers demonstrate the use of ancient manual olive presses and other agricultural devices. You can stop here for a few minutes to take a look at the reconstructed olive oil press and a few similar exhibits. There are panels which explain a little bit about each contraption, so you can learn about ancient oil production - a key branch of local agriculture. 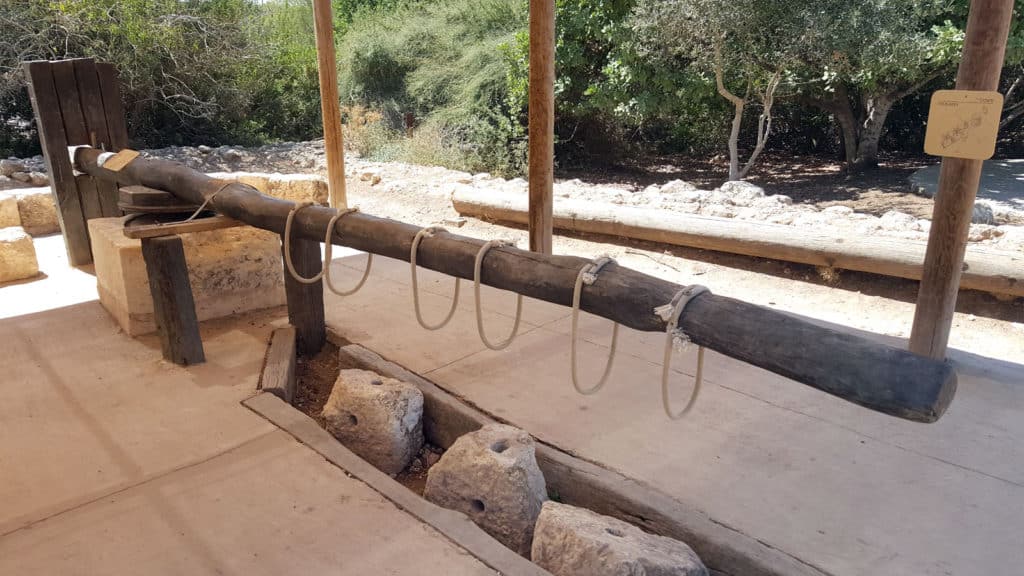 Your first cave in the park! During WW2 Polish soldiers visited the cave and carved the Polish Eagle - a symbol of the Polish army - on a large stone which still stands in the middle of the cave. This large cave is in fact an ancient cistern, dug some two thousand years ago. Whoever created the cave, added small holes for his pigeons too. 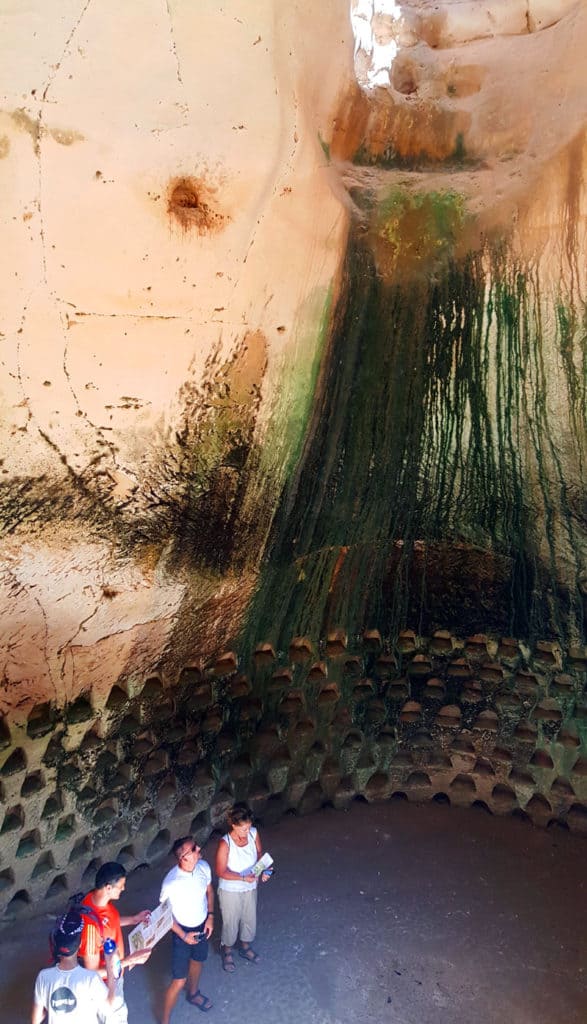 Did we say pigeons? Apparently the locals loved them. Nobody knows for sure what they were used for - presumably food - but they certainly kept many of these birds. Today, the word Columbarium is used to describe a cave where urns are placed into small excavated spaces. Originally, the same kind of niches were used as nesting places for pigeons or doves - a dovecot. The latin word for dove is Columba, hence, the Columbarium.

This cave is the largest underground dovecot in the park, though the similar dove niches are also found in some of the other caves.

As you go down into the cross-shaped excavated cave, you get a sense of just how large it is. Try to imagine it filled with fluttering birds and feathers! Must have been very loud and smelly. I kinda feel sorry for whoever it was that had to care for the birds. 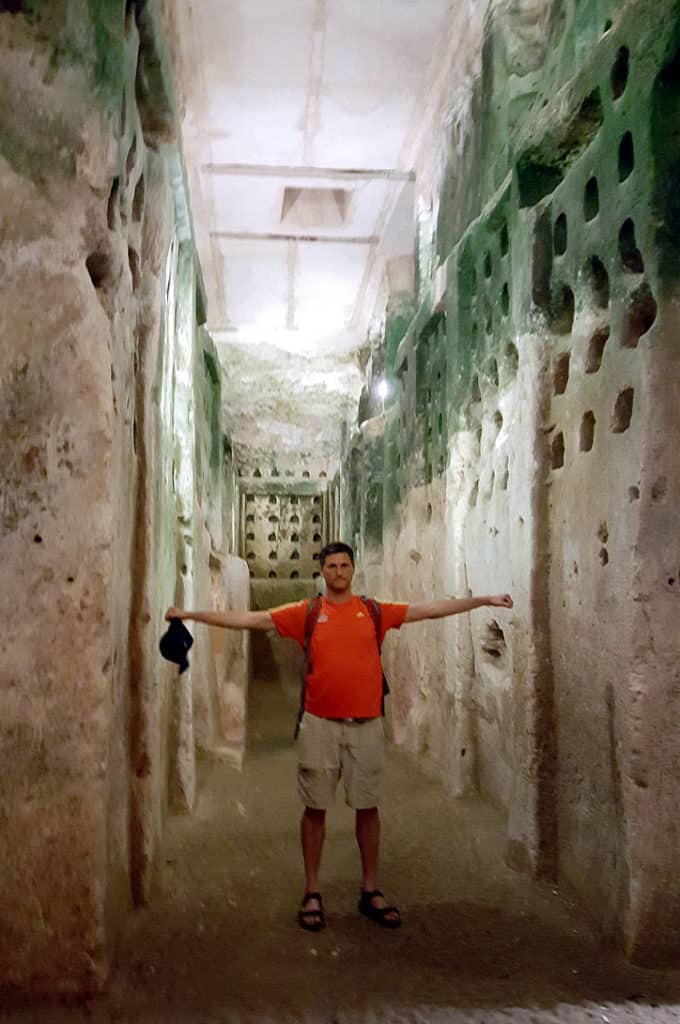 This small cave is believed to have been a bathing area. Researchers aren't sure if this was a regular bathroom or perhaps a space dedicated to some bathing ritual.

The Beit Guvrin people seem to have dug a cave for every need. Why sweat outside when you can work within the chilling confines of the cave? 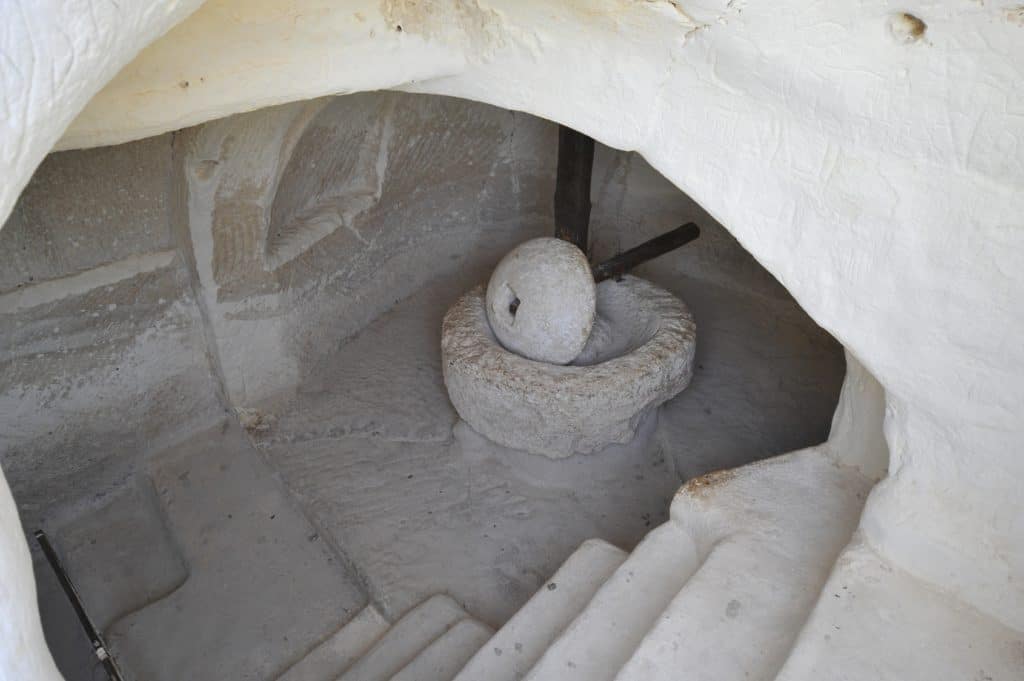 As you visit this semi-reconstructed dwelling - not a cave for a change! - keep in mind that an actual treasure of gold coins (dated back to the second century BC!) was found under the floors here. This used to be a large house and you can walk around its ground floor, climb up to the remains of the second floor or go down to the see the old water cisterns.

This Maze cave will probably be the highlight of your visit. This is a magical underground labyrinth that you can easily feel lost in. You'll be going through rooms of various sizes that used to fill different functions, including water cisterns, storage rooms and of course, a columbarium.

These were the underground rooms of actual houses above ground. You can't see the houses these days, unfortunately. The archeologists had to cover them up again with dirt, until they find the resources to properly excavate them. 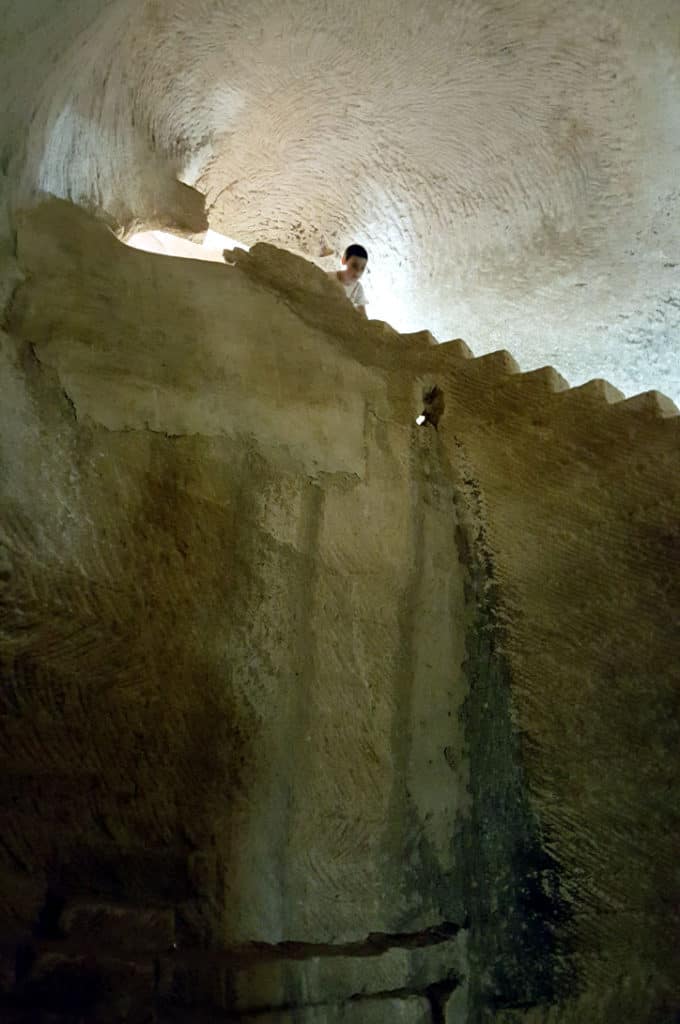 Don't worry about the "feeling lost" thing. There is one path and it's clearly marked and well-lit. You won't have to crawl on your knees and hands at any point. However, watch your head as you definitely will have to lower it occasionally. Kids love this huge chain of caves and it certainly gives them an unfair advantage!

A short descent will bring you right into the cryptic Sidonian burial caves. The sarcophagus - ancient coffins made of stone - are no longer here but walls have been beautifully restored and you can spend awhile here looking at the paintings and reading about the cave. 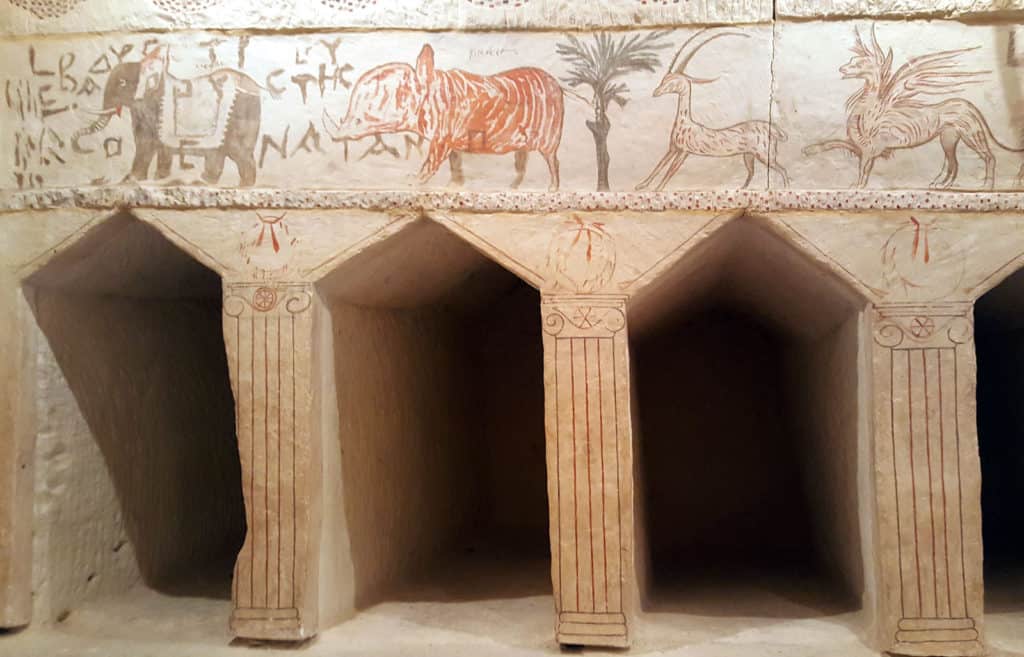 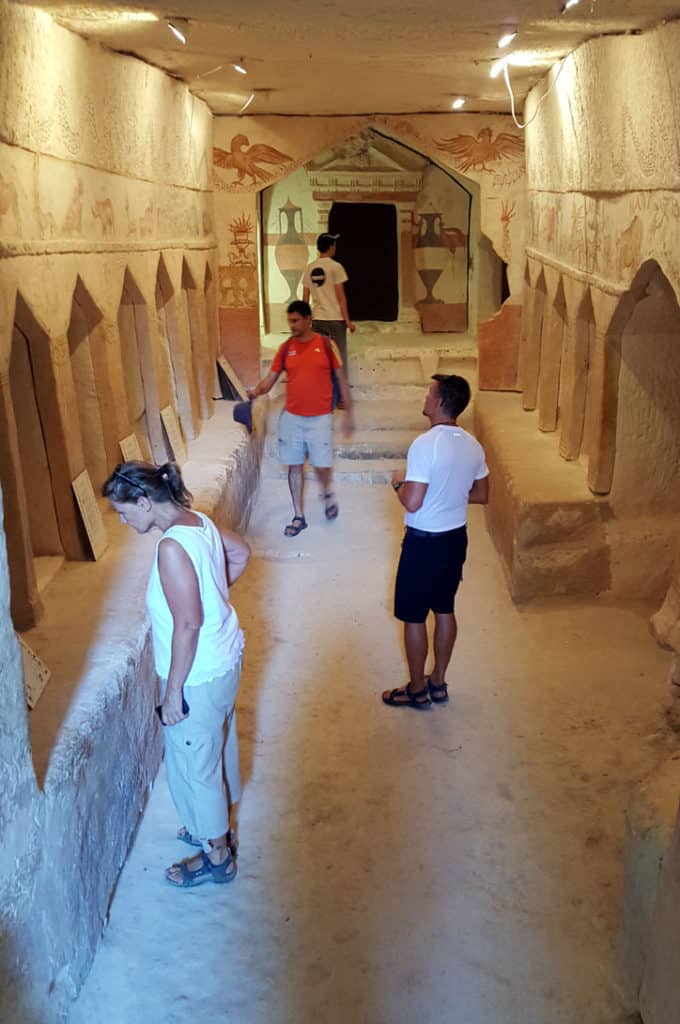 This large reconstructed church was built during the Byzantine period and later restored by the Crusaders. The church was named after Anne, the maternal grandmother of Jesus. Located further away from the parking lots, you'll have to walk for a bit to get there. On a hot day, viewing the church from a distance may be a wiser choice.

The bell caves are definitely another "must-see" spot in the Beit Guvrin park. They're so beautiful and large that you'll find it hard to believe they're not natural caves. 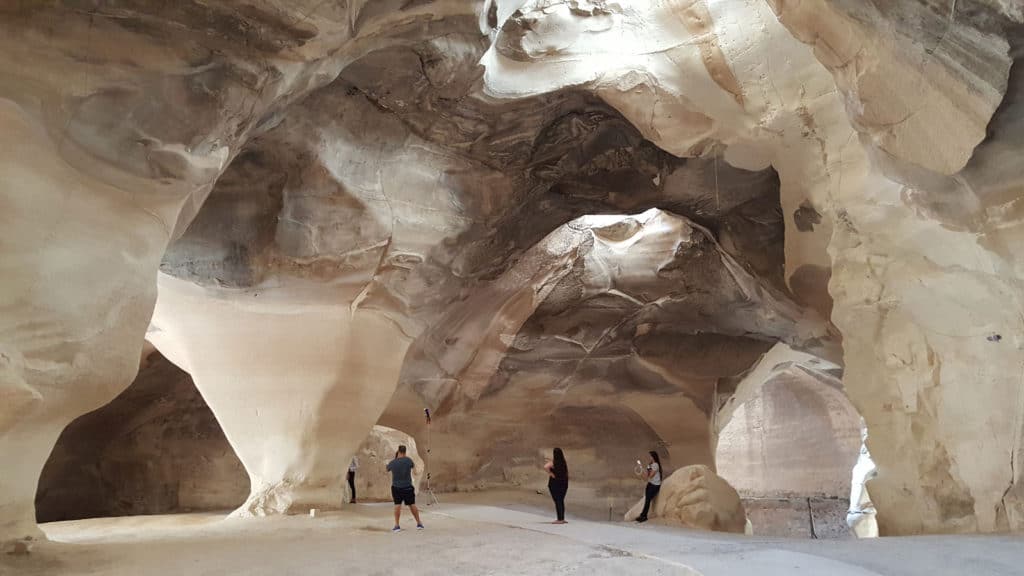 These are in fact quarries. The inhabitants of Beit Guvrin during the Byzantine and early Muslim period excavated the hills for building materials, forming these spectacular bell-shaped spaces. 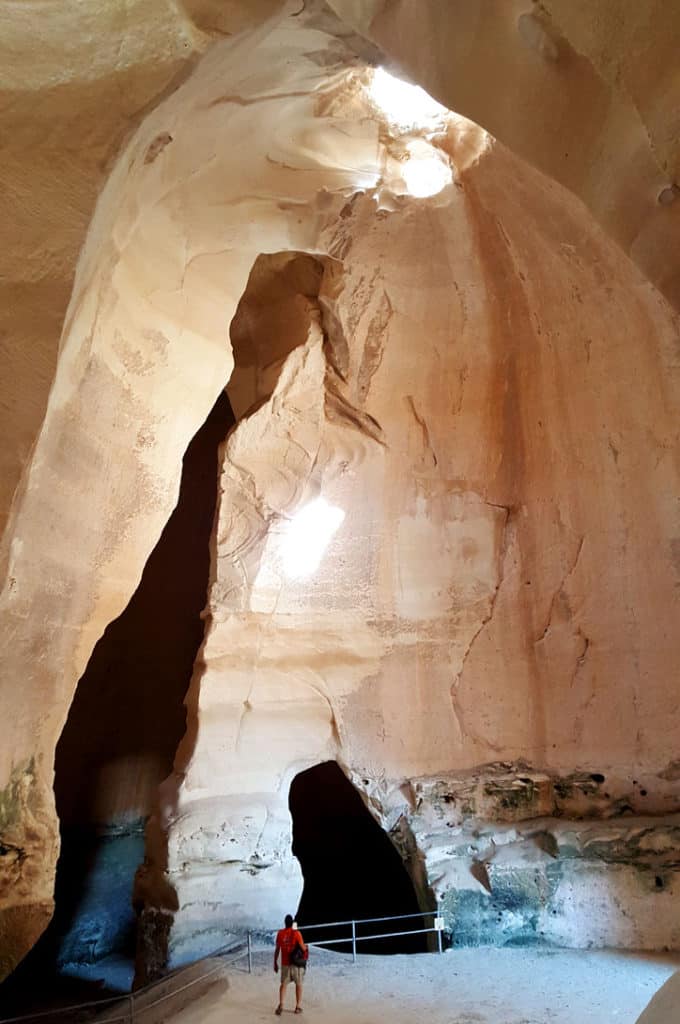 The lovely trail from the parking lot to the caves is worth seeing in its own right, for the mediterranean shrubbery and trees that so elegantly contrast with the light-colored stone. 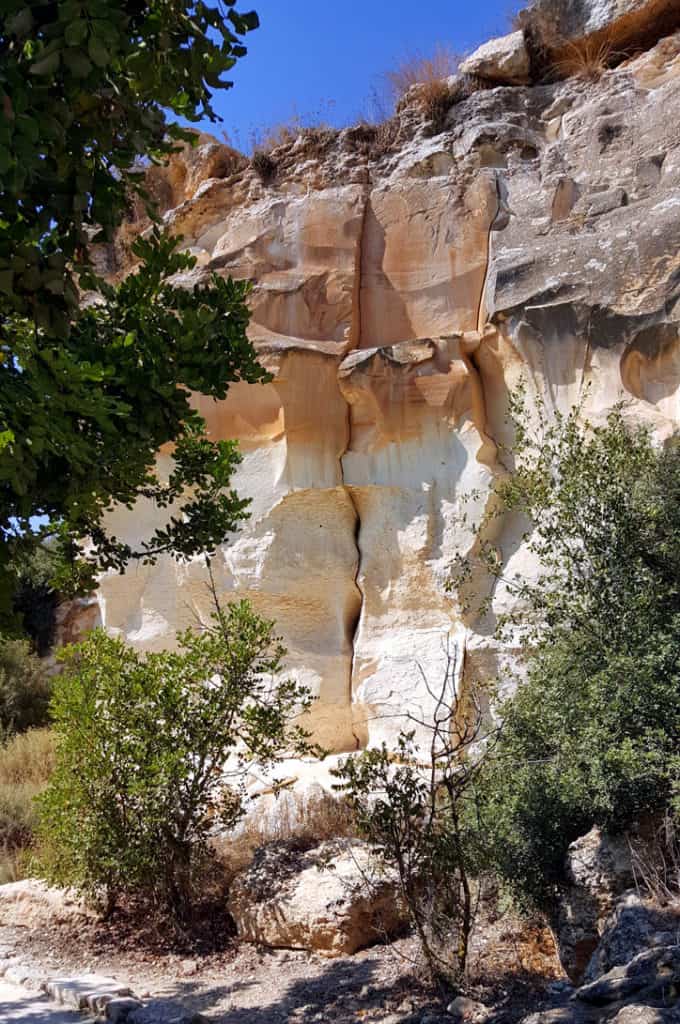 The bell caves conclude your visit in the Southern part of the park. You can now take your car and cross over to the northern part. It's a short drive, literally across the road. Your visit to Beit Guvrin continues there with the following -

The round Roman amphitheater was a hub of local contests and sports. You can try the seating area - large enough to host 3,500 spectators - or hop on the stage and imagine what it might feel like to be a gladiator. 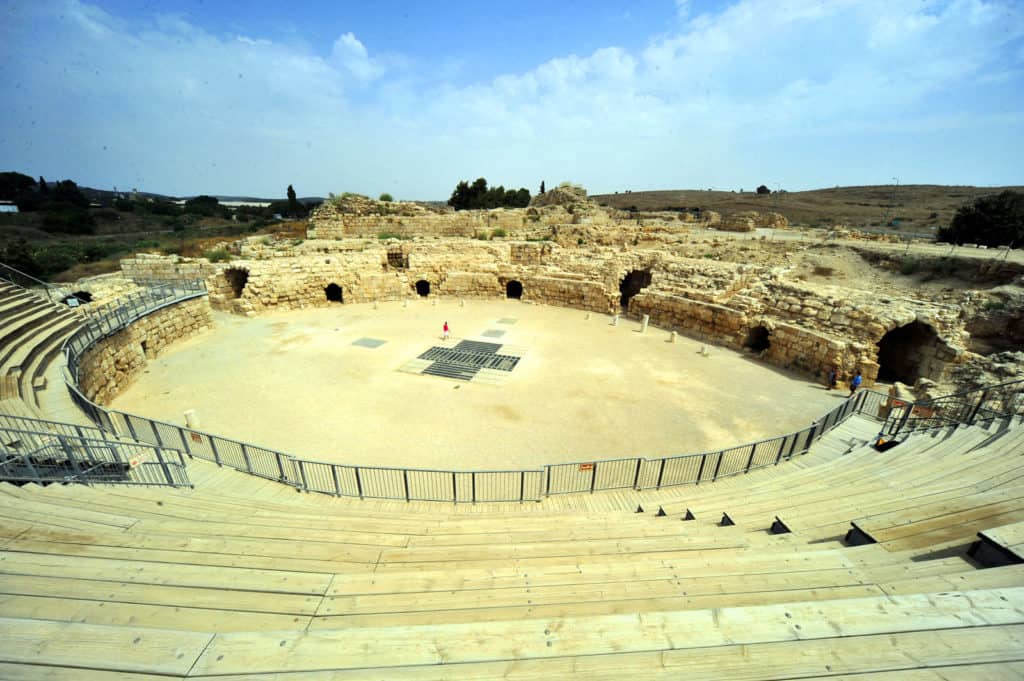 12. The Crusader Fortress & The bathhouse

East of the amphitheater, you'll find the Crusader fortress, including the remains of a basilical church which dates back to 1136. You can still see the Roman and Byzantine stone bases, columns and capitals lying around (archeologists believe the people who built the church took them from the ruins of nearby ancient Beit Guvrin).

Right next to church is the Roman bathhouse, which had the usual Roman rooms for cold and hot bathing. The trail will take you to three impressive vaults which were also part of the bathhouse. 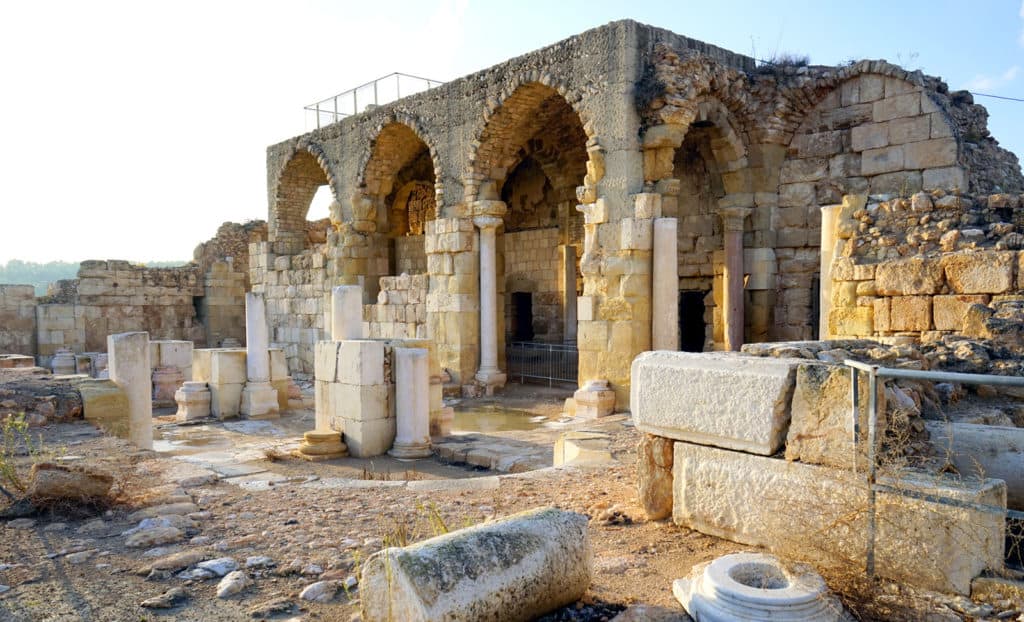 Things to know before you visit Beit Guvrin

How much does it cost?

Beit Guvrin is a national park, so if you have the national parks card you can enter for free. Otherwise, you'll pay 28 shekels ($7.3) for an adult and 14 shekels ($3.6) for a child or senior citizen.

Like most places in Israel, it can be very hot here anytime between May and September. However, since so much of your visit takes place underground, it's actually a good place to visit any time of the year.

The flora in the park is a mix of evergreens and perennials. You'll have shade from the trees on some of the trails and see green trees around you any time of the year.

If you can make it here during January-March, you'll be rewarded with green grass and flowers too!

As with any national park or nature reserve in Israel, weekends and holidays are busier. If you want to take pictures using a tripod and have the place to yourself, show up on a weekday that's not a holiday (don't forget Sunday is actually a weekday here!)

The parking lots, picnic areas and bathrooms are wheelchair-accessible.  However, with so many caves and stairs, the park itself isn't very suitable for wheelchairs. Parents with strollers will also find it nearly impossible to navigate most caves.

According to the park authorities, the trail to the Bell Caves is wheelchair-accessible.

Facilities in the park

There's no information center in the park per se. The booth at the entrance is where you may see a park ranger but he or she is there to collect your fee and hand you a brochure with a map. If you have questions, you may want to look for answers online before your visit, or look for one of the many signposts offering detailed explanations in Hebrew and English.

There are no restaurants but there is a small souvenir shop where you can also buy cold drinks, snacks and ice cream.

There are several bathrooms available along your route, and we've never had any issues with using any of them.

What should you bring for your visit to Beit Guvrin

While most of your visit takes place in the shade (that's the benefit of caves!) you will have to deal with the harsh Israeli sun when moving from one point to another. Those short walks can quickly get you sunburnt in Beit Guvrin simply because the ground is chalky white and reflects a lot of the sunlight.

Make sure you bring a hat, sunscreen and plenty of water, especially if you're coming during the long summer season. Cold drinks are available for sale but you'll be doing quite a bit of sightseeing before you reach that elusive snack shop.

How long would it take you to visit Beit Guvrin?

3-4 hours would be enough for most people. If you tend to hike/walk quickly, you may be able to make it in two hours. If you're short on time, don't miss out on the Maze Cave, The Sidonian Caves and the Bell Caves.

That's it! I think that's everything you need to know to have a perfect visit to this spectacular park. If you have any other questions, feel free to leave me a comment. If I don't know the answer myself, I can access local websites or even make a phone call to find out the answer for you.

Any other comments are very welcome as well! Let me know if you've been here, or if you'd like to visit someday!