Visiting the Albuquerque Balloon Fiesta is a bucket list experience. There's nothing quite like standing in a huge field with hundreds of HUGE hot air balloons gracefully floating all around you. Here's a quick guide I've put together to help you make the most of the experience. 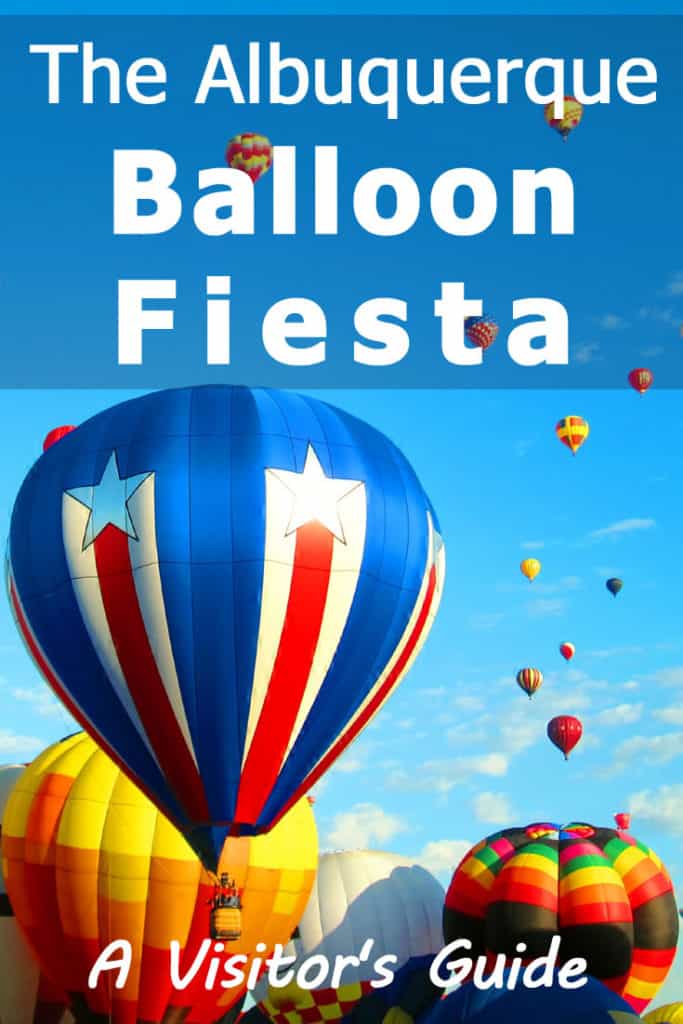 We visited the Albuquerque Balloon Fiesta in 2011, as part of a very long (five and a half months!) road trip in the USA and Canada. We've seen so many fantastic places and things on that trip. Giant sequoia trees in California,  a huge fireworks festival in Vancouver, geyser eruptions at Yellowstone, glaciers and iceberg lakes in the Canadian Rockies, whales and moose and dozens of bears in the wild... the list goes on and on! Even so, the Albuquerque Balloon Fiesta did not fail to hugely impress us. It easily worked its way into the top five highlights of our trip.

I confess, I was daunted at first. Should we take two kids - aged 9 and 11 at the time - to a festival that attracts an estimated 100,000 people every year? I did my research and eventually decided to go for it, and I'm so glad we did! If you're considering visiting the Albuquerque Balloon Fiesta yourself, keep on reading. I have some important tips and a bunch of photos that will help you make the right decision too.

Established in 1972, The Balloon Fiesta is now the world's largest hot air balloon festival. The event takes place for nine days, during which tens of thousands of spectators gather in a large field in Albuquerque, New Mexico to watch hundreds of hot air balloons take off.

Where, when and how much?

The festival lasts for nine days. Each day has morning events and evening events and they're called "sessions". Not much going on in the middle, so it's a great time to go back to your hotel and get a nap.

Tickets are very affordable at $10 per person. That's for a single entry per session though. If you want to come back the following day, or even returning in the evening, you need a new ticket. Good news for families though, under 12 kids can enter for free!

You can buy tickets online or at any 7-Eleven at Albuquerque during September. We bought our tickets the day before the first day of the festival at the local Hot Air Balloon Museum.

Days start early with this festival. Very early. The first daily event is the Dawn Patrol. That's when a dozen or so balloons take off to check the wind direction and make sure conditions are safe enough. The Dawn Patrol balloons take off at 6AM but to really enjoy this event, you should be there at least half an hour earlier, so you can see how the balloons operators light up the fire and gradually fill them up. The park opens at 4:30am, if you really want to get a head start.

The sight of a row of huge balloons glowing in synced bursts, before and during their take off is something we'll never ever forget. More about that later in this post. 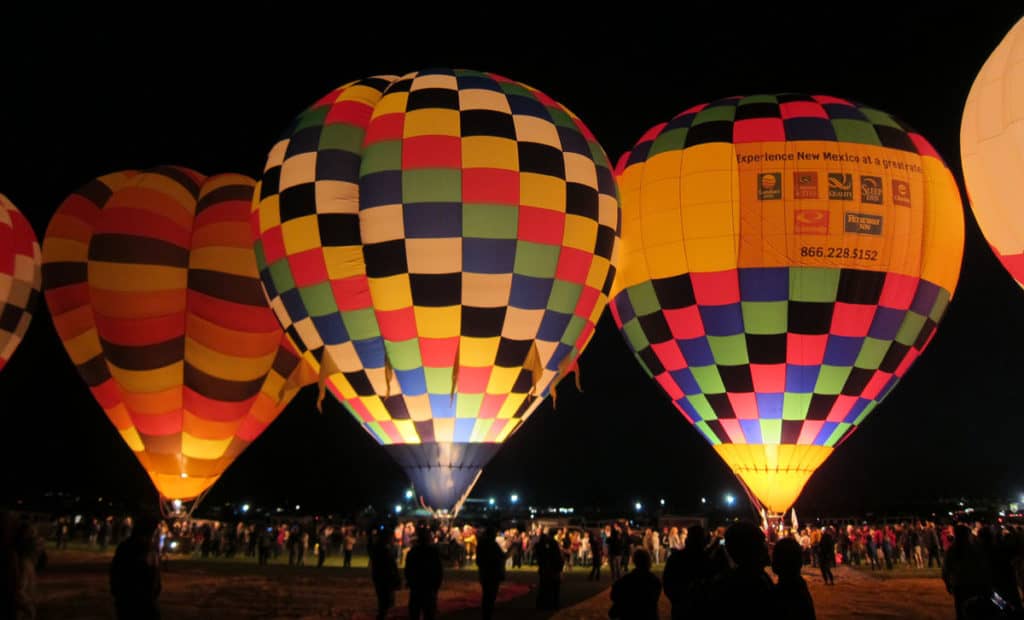 The Mass Ascension is the main event of every day. This is what everyone's here for!

You know how kids get so excited when you blow lots and lots of soap bubbles around them? There's something amazing about seeing floating orbs all around you, wherever you turn your head. Now, imagine these "orbs" are gigantic colorful hot air balloons, dozens and then hundreds of them, all in the air at once! They reminded me of herds of mythical beasts, gently and very slowly cruising all around us. 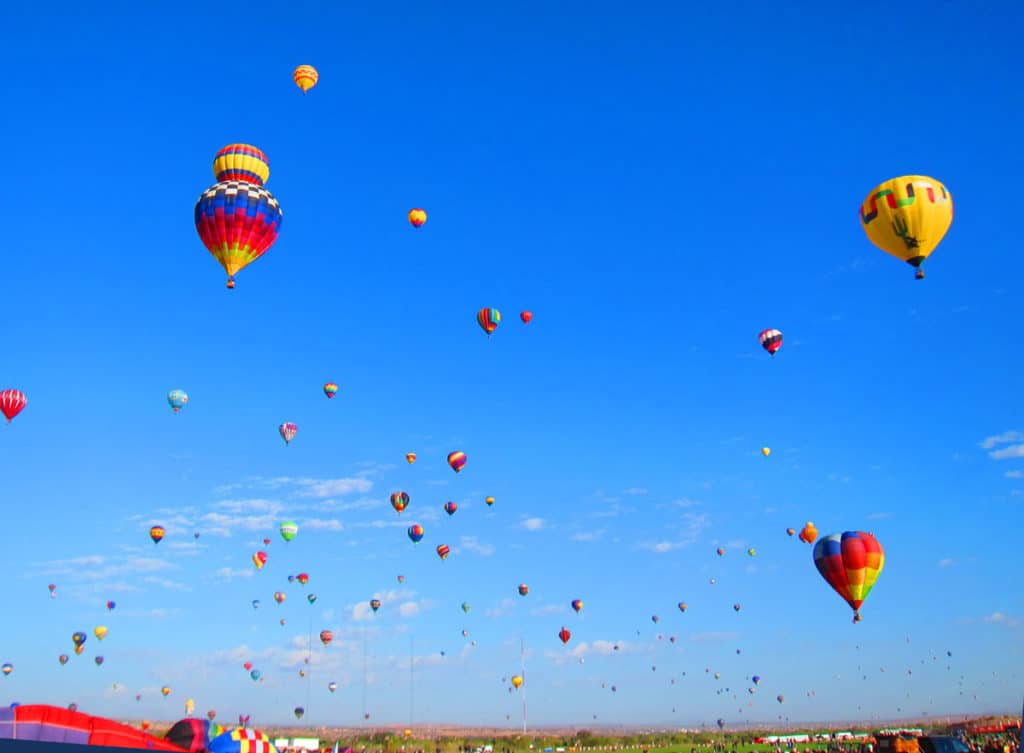 It's definitely one of these things that neither words nor photos or videos can really express. You just have to be there to understand. Still, the visuals are amazing. They say it's the most photographed event in the world, and I can certainly see why.

There are many other events during the nine days. Firework shows in the evening (they can't fly the balloons at night), races and contests galore. There are events for special shapes balloons but you can also see them during the Mass Ascension. 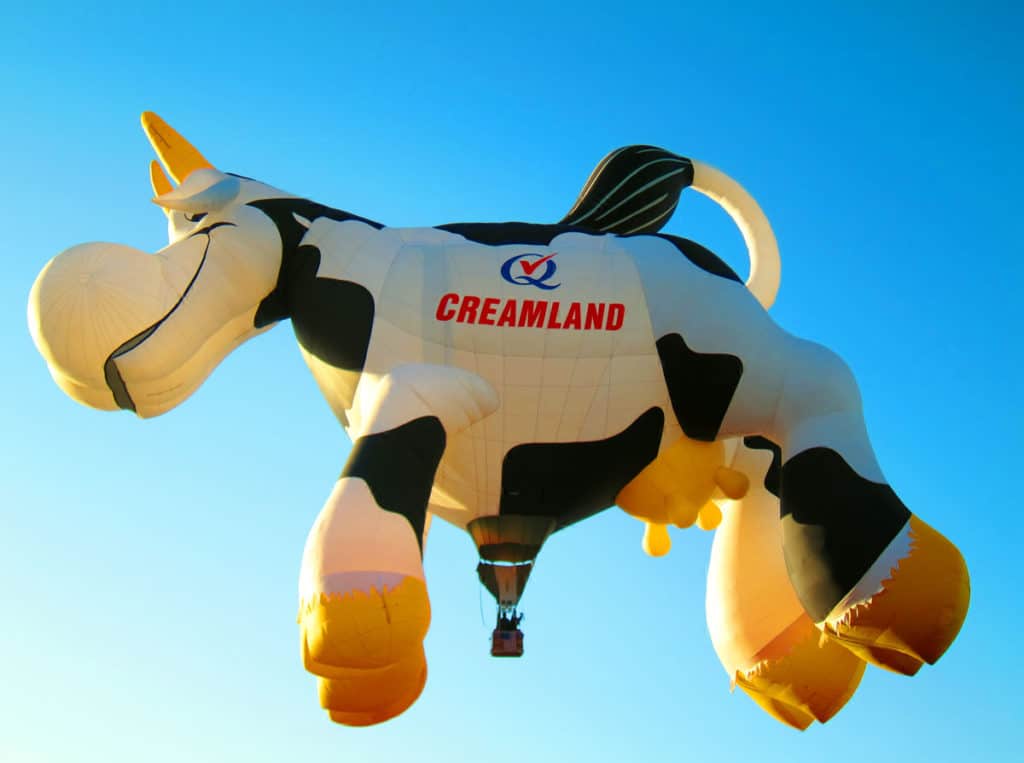 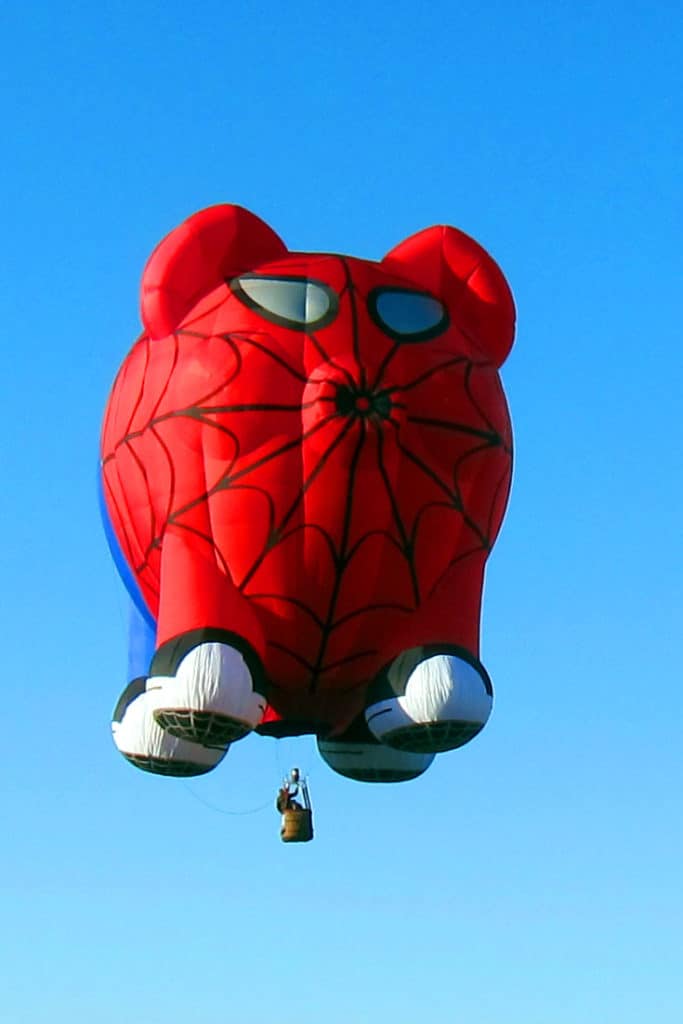 My tips for making the most of your Balloon Fiesta Experience

1. Book your accommodation way in advance.

A hundred thousand people can really fill up a city! This is one of these events where if you don't book in advance, you'll have to pay and arm and a leg for a simple motel room. As I mentioned earlier, our own visit to the Albuquerque Balloon Fiesta was kinda spontaneous. When I was looking for a room - two weeks before the event - none were available for under $200! We ended up couchsurfing instead because $400 for two nights was way out of our budget.

In fact, I just checked at Booking.com and some hotels are already sold out for the 2017 dates. Not all though. If you hurry, you can secure a room at awesome rates right now. With free cancellation, you have nothing to lose, so if you're considering going to this event, book your room ASAP.

Here are a few budget options that are still available with FREE cancellation, at under $50 for a room for two. They all have a decent reviews score (above 6) but do check to see which one works for you. These prices will soon change. If you wait for the last minute, you won't find anything under $200 a night, often for these very motels.

Or just use this link to explore other options

If you make your purchase through one of these links, I'll bet getting a small commission. It won't cost you a penny though. Thanks in advance for helping keep this blog going!

In other words, don't miss out on the Dawn Patrol. Not only is it a spectacular sight to behold, there's a sense of excitement about being out there in the dark, launching a new day with hot air balloons. There's something magical about seeing the balloons turn from deflated shapes in the dark-

Into glowing beasts of the sky - 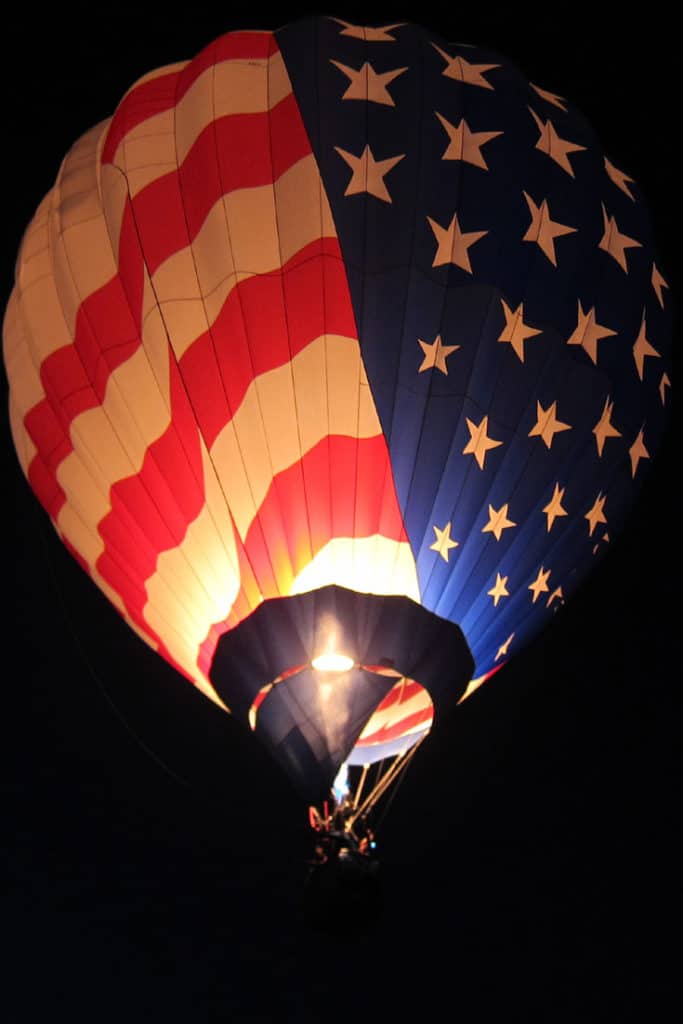 The Dawn Patrol is awesome. There's music and shouting and the kids were besides themselves with excitement (ok, so were we!) Here's a short video, but again, it's one of those things you have to be there to truly experience. There is nothing, just nothing, like a hot air balloon glowing in the dark as it passes right above your head -

We were worried about the kids being too tired this early but the adrenaline rush was like none other, so they were up, alert and constantly smiling.

Also, watching the sunrise while surrounded by hundreds of hot air balloons was pretty amazing. 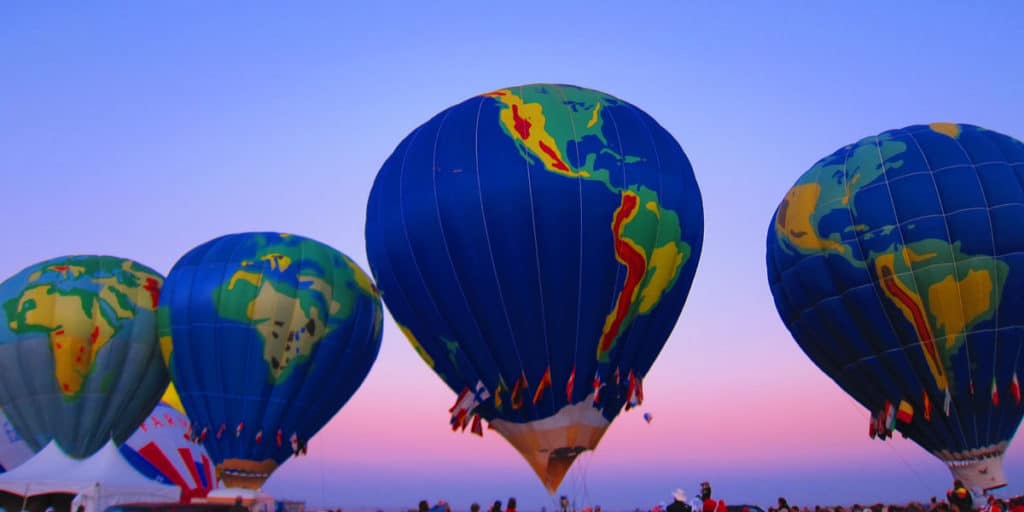 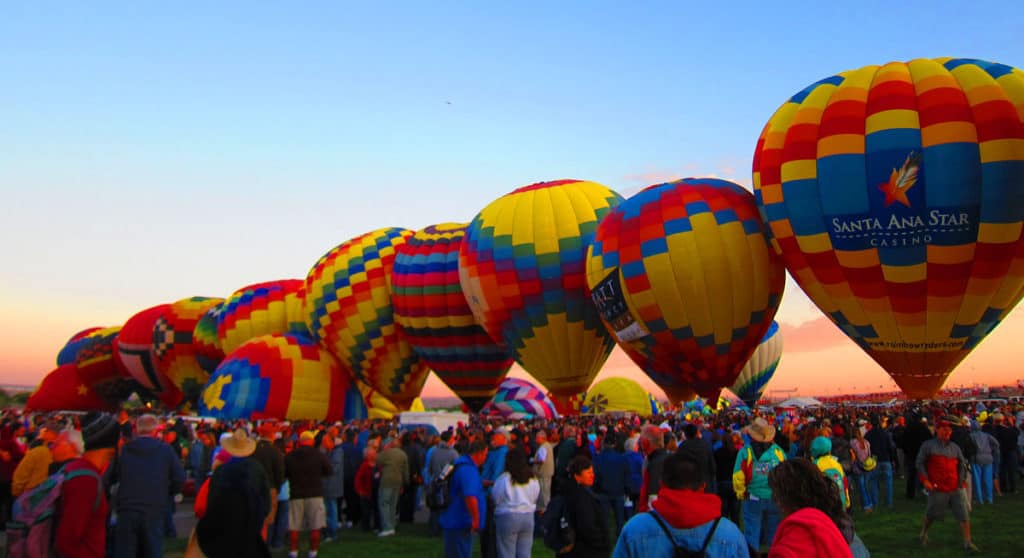 It's chilly out on the field at 5am. The kids had warm jackets and hats too. Later on, as the sun came up, we could lose the outer layers but they certainly were needed in the early hours. 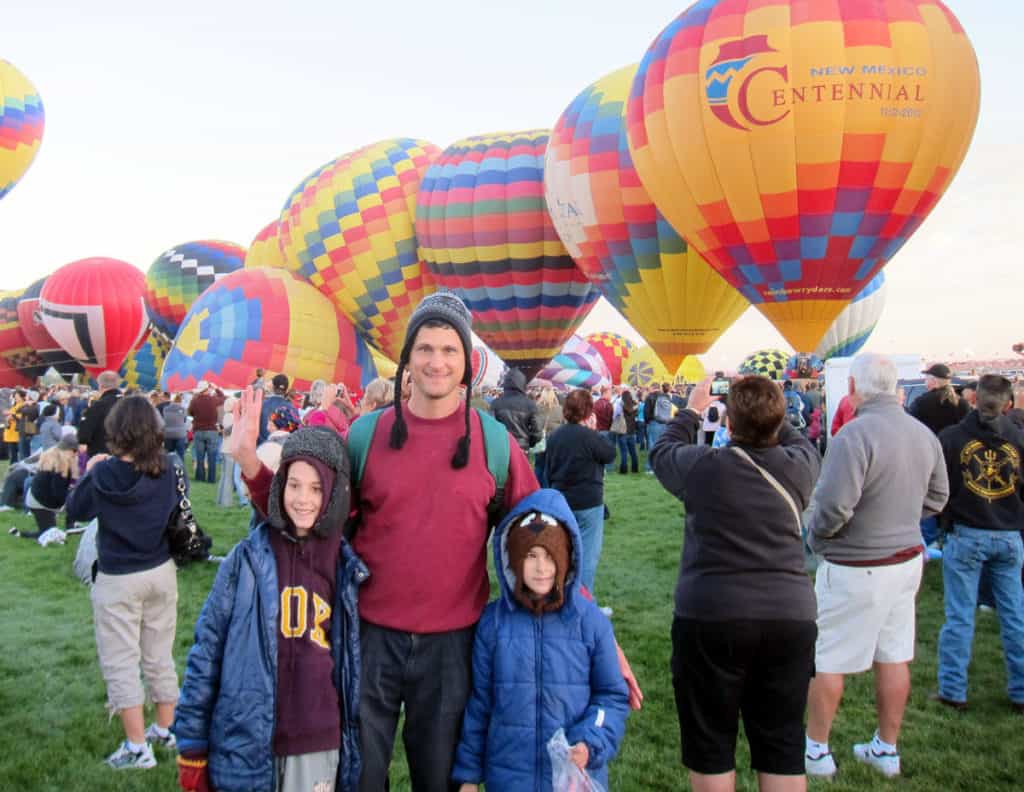 There were food stands where we did get hot chocolate and coffee but would certainly have preferred our own thermos, just to avoid the lines. Having some healthy snacks with us helped tremendously, especially during the Dawn Patrol when most stands were still closed and none of us wanted to leave the show anyway. In between the Dawn Patrol and the Mass Ascension there was plenty of time to buy food though.

I know it sounds strange but it didn't actually feel too crowded. The field is huge and there's plenty of room for everyone. We arrived with a car, so were there extra early to make sure we have time to stand in lines for the parking lots. There was zero waiting time. We just followed the instructions of the parking lot attendants and were in the fields within minutes.

6. Get up close and personal.

One of the best things about the Albuquerque Balloon Fiesta is that you are right there with the balloons. You can actually touch them as they get ready to take off. Spectators can help the operators fill up and prepare them as well. We got to help pull a hot air balloon up! Lots of fun! 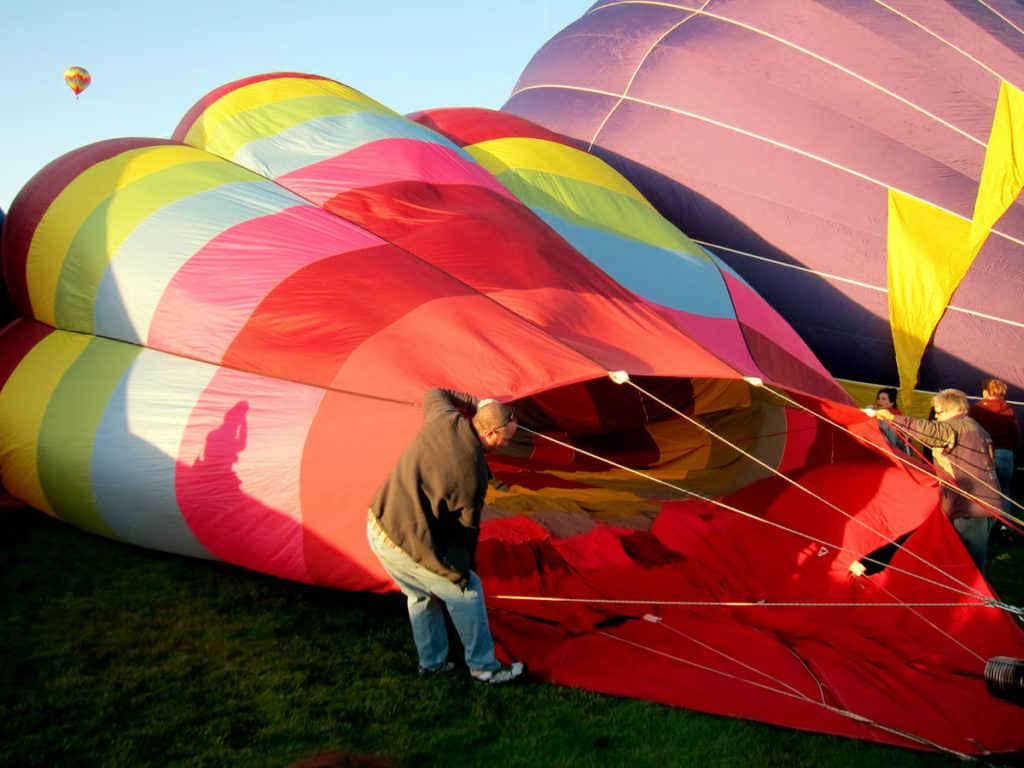 As for going up in one of the balloons, that too can be done. It'll cost you money, of course, and must be booked in advance. I think the atmosphere on the ground is so special, I would only go up on a balloon if given the opportunity to spend a few days at the Albuquerque Balloon Fiesta. With only one day to experience the event, I think from the ground actually works better.

Come prepared with a good camera and an empty memory card. Trust me, you won't stop taking pictures. You just can't. Wherever you turn your head, there's another awesome sight that just beckons a picture.

I think we took at least 200 photos and movies in the five hours we were there. Here, let me wrap up this post with a photo gallery. And if you have any comments or questions about the Albuquerque Balloon Fiesta, please do use the comment form! 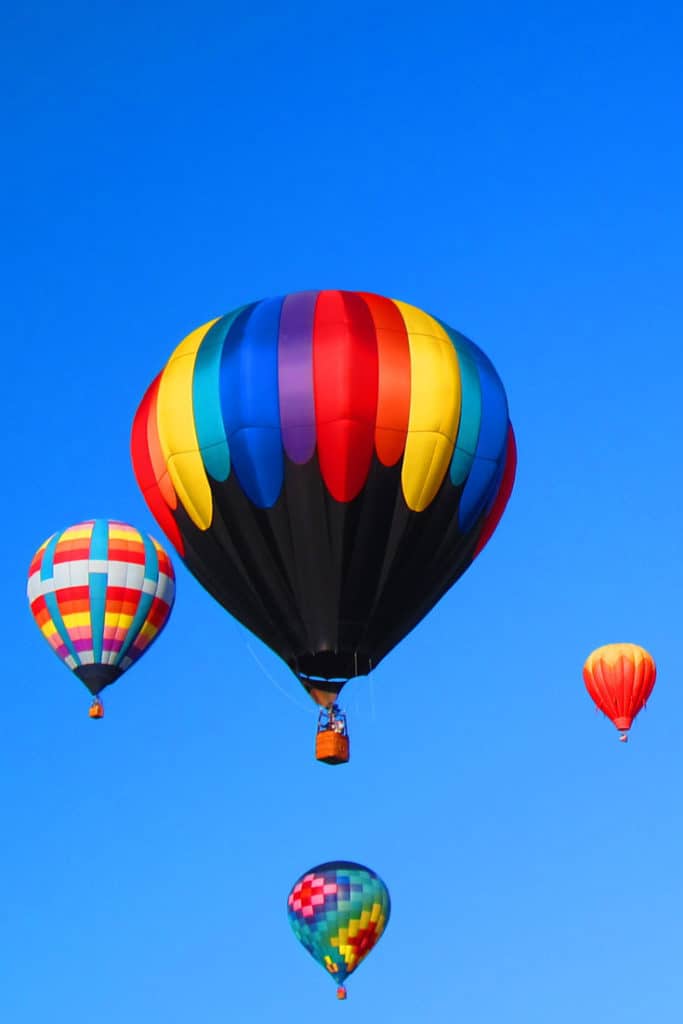 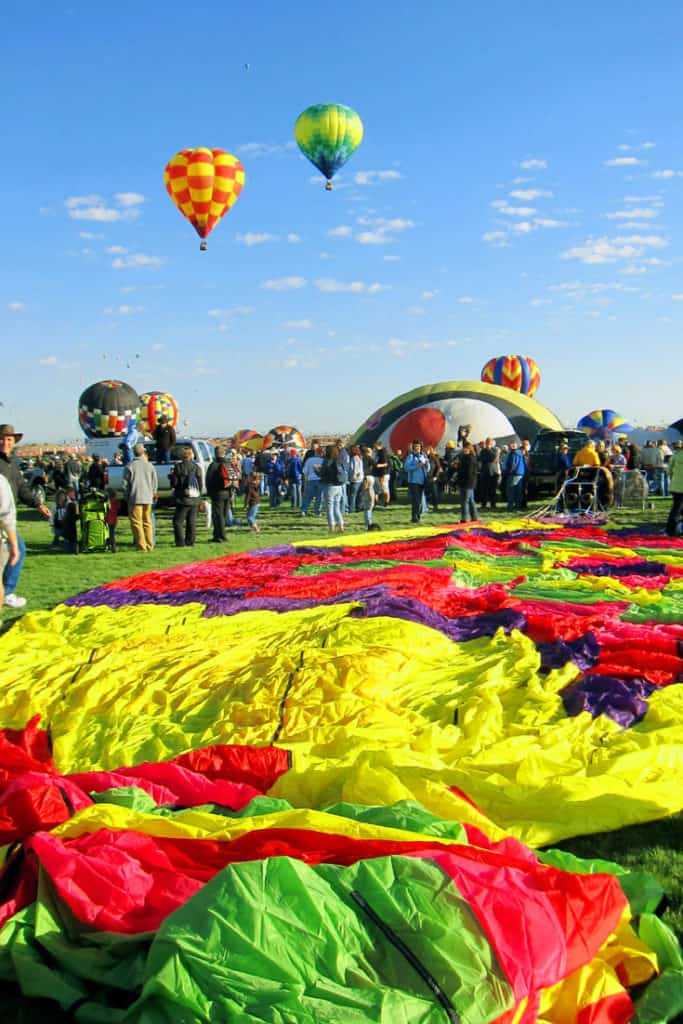 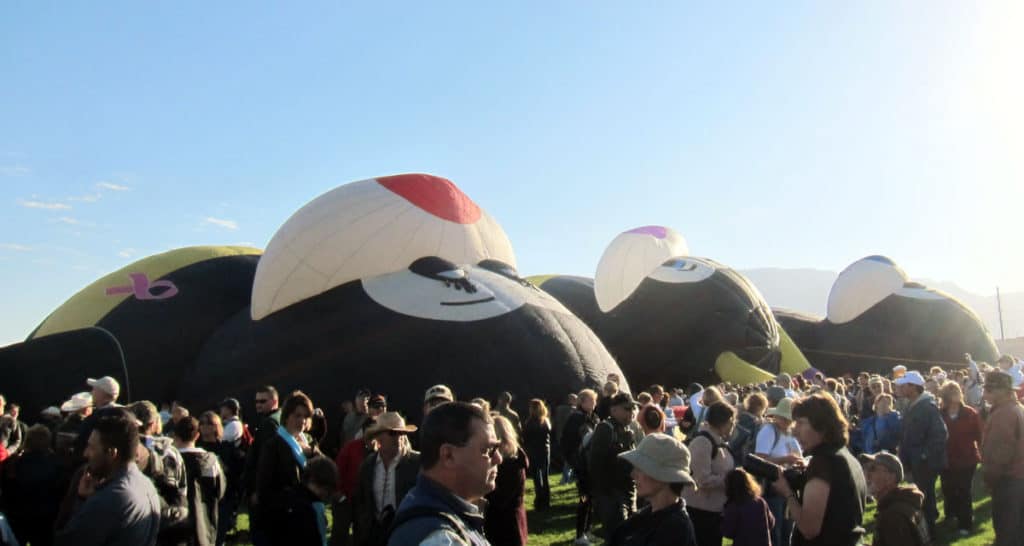 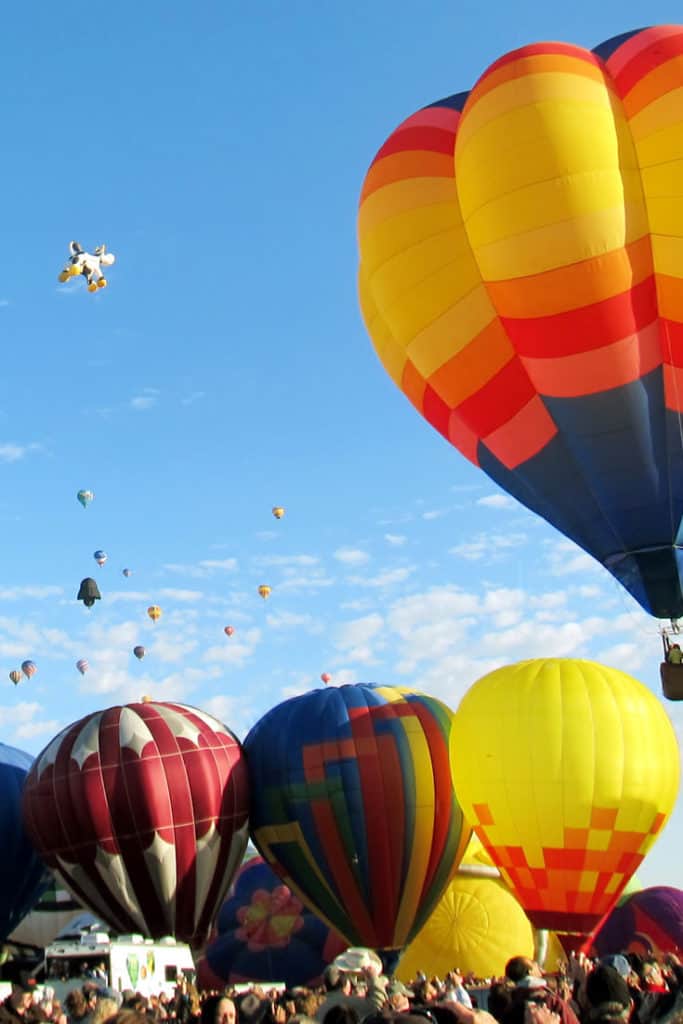 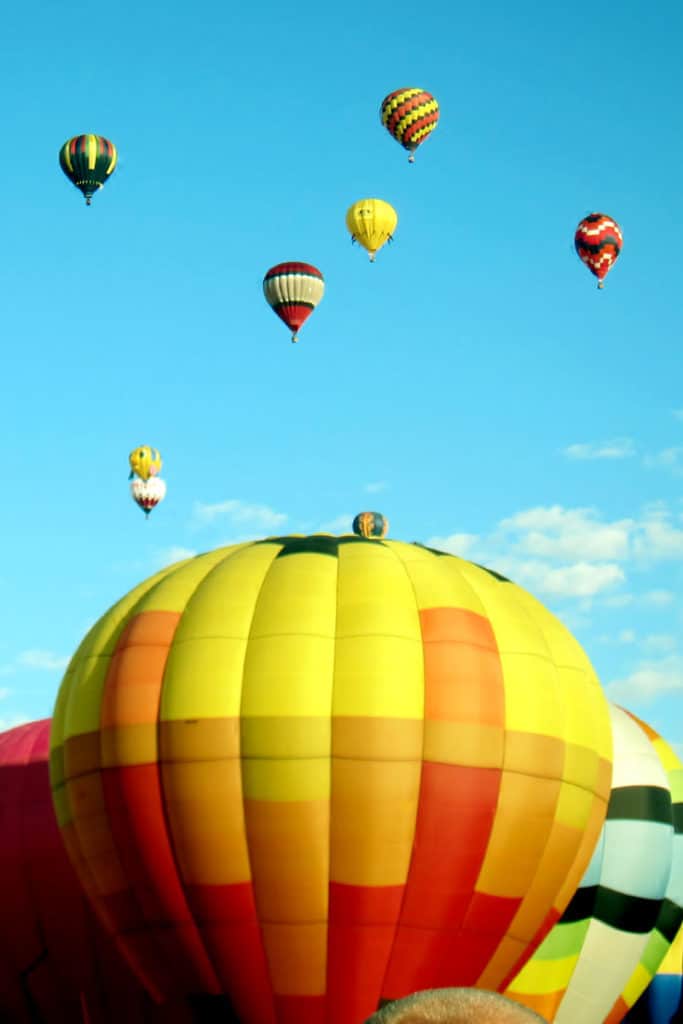 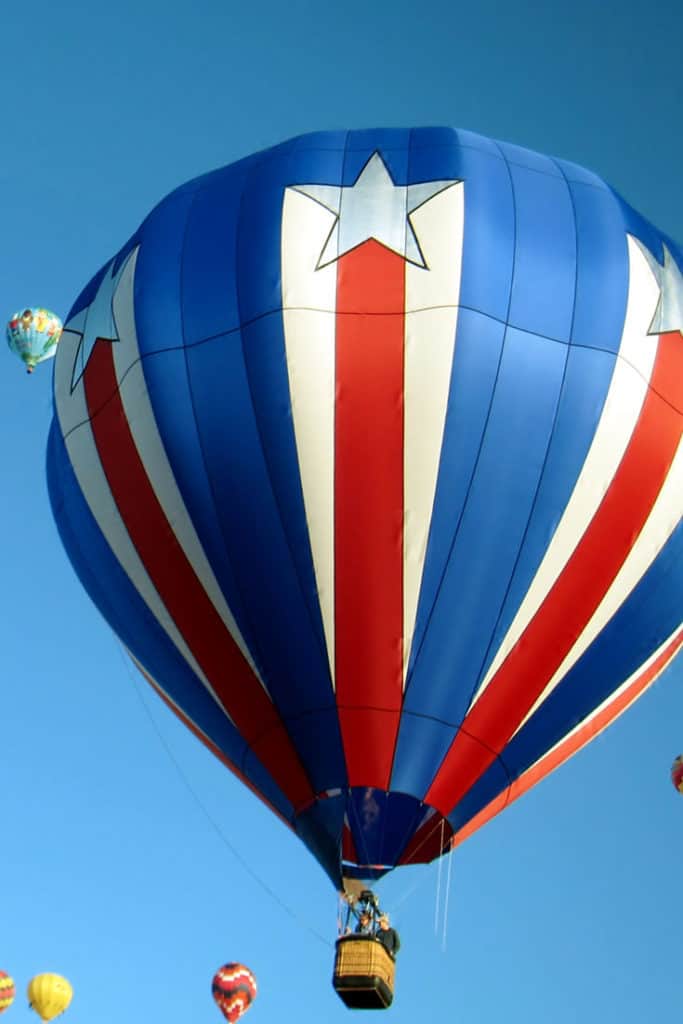 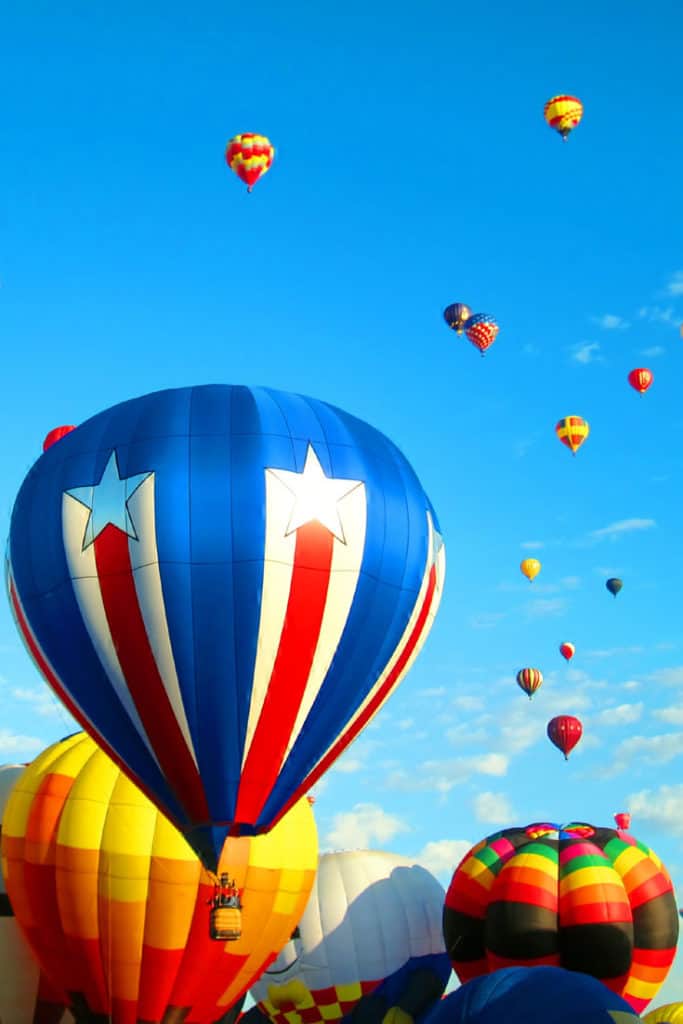 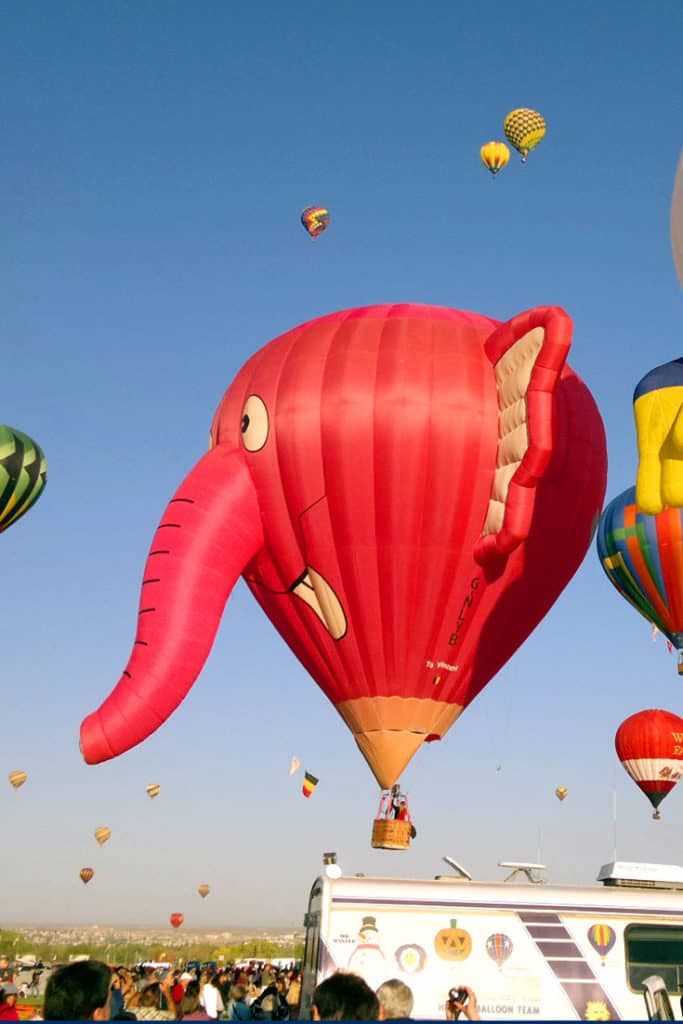 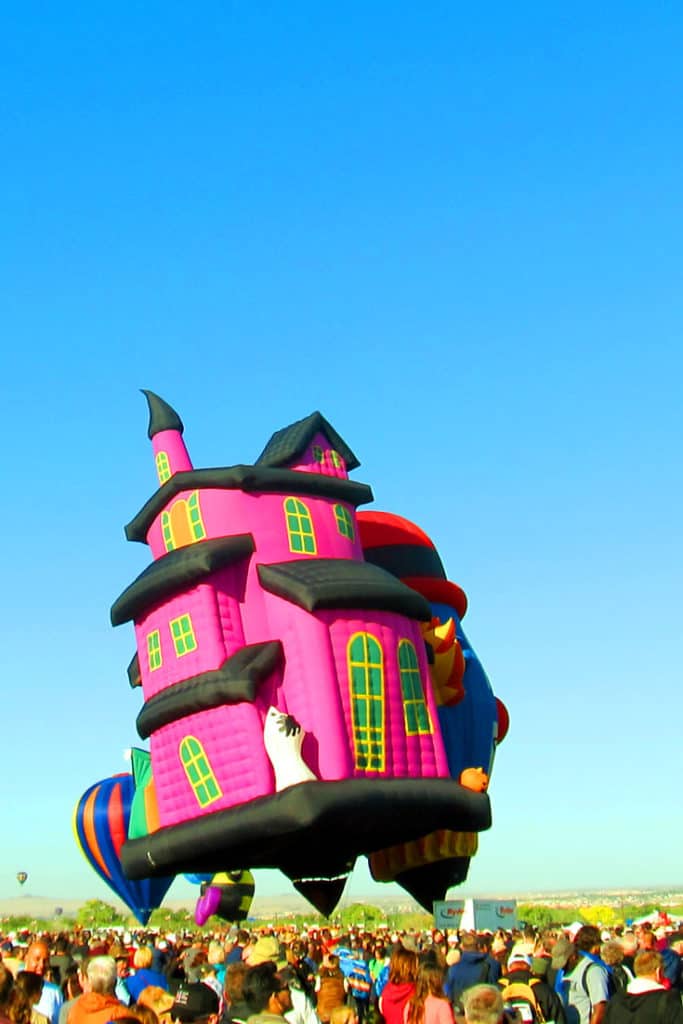 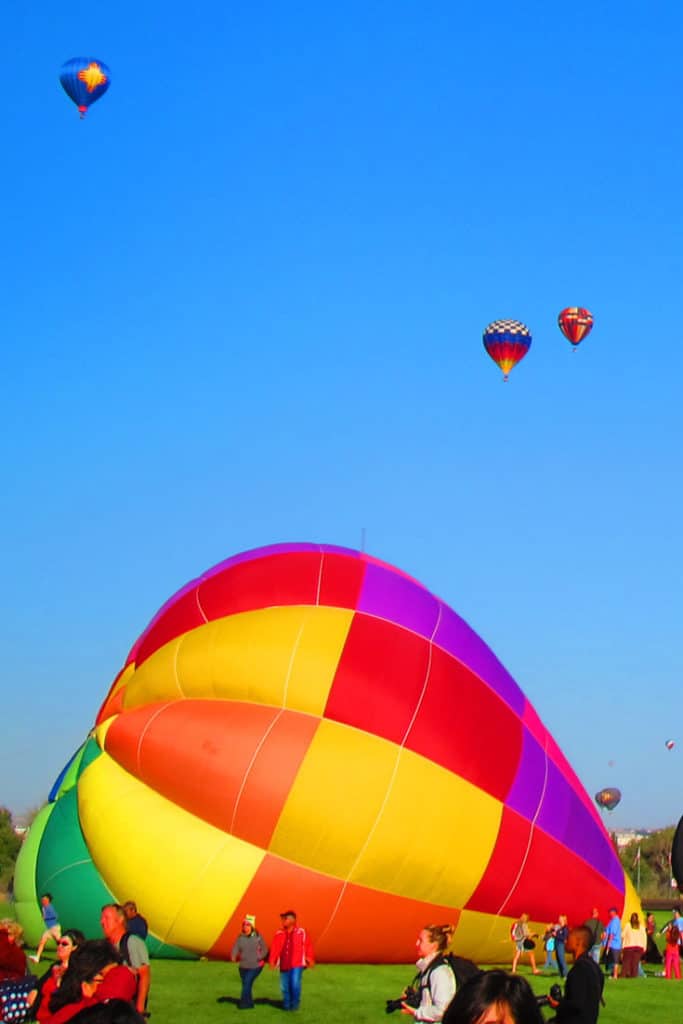 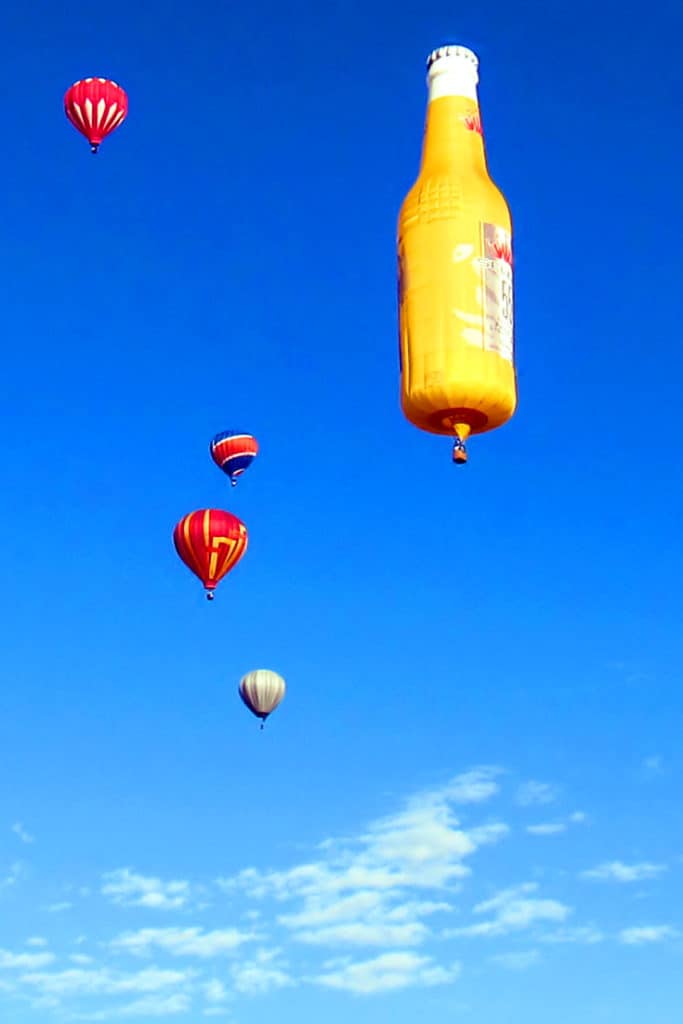 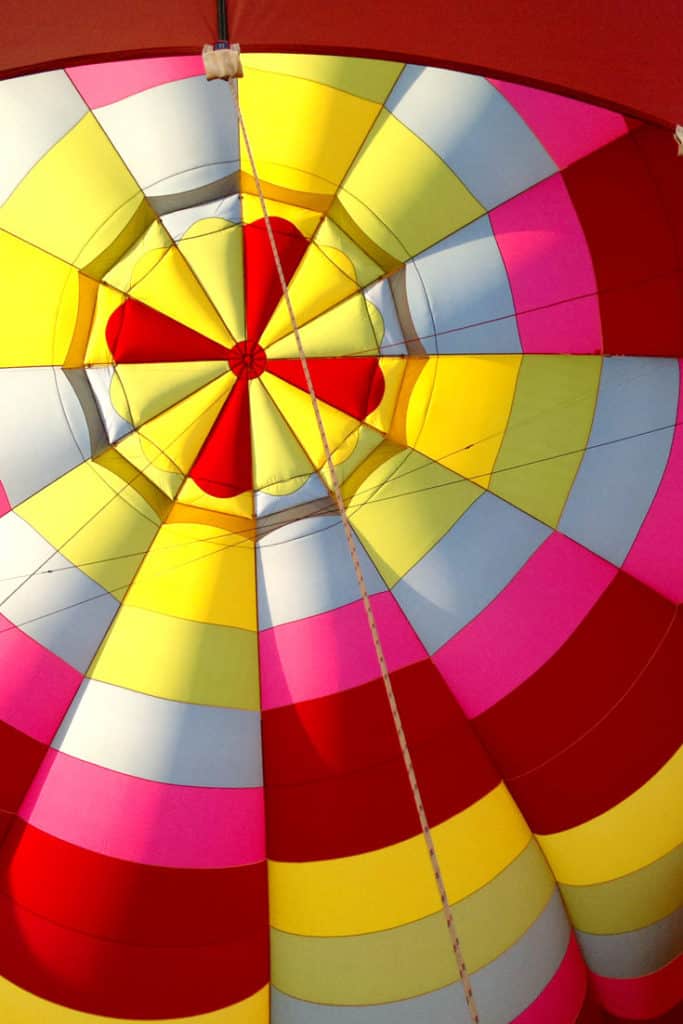 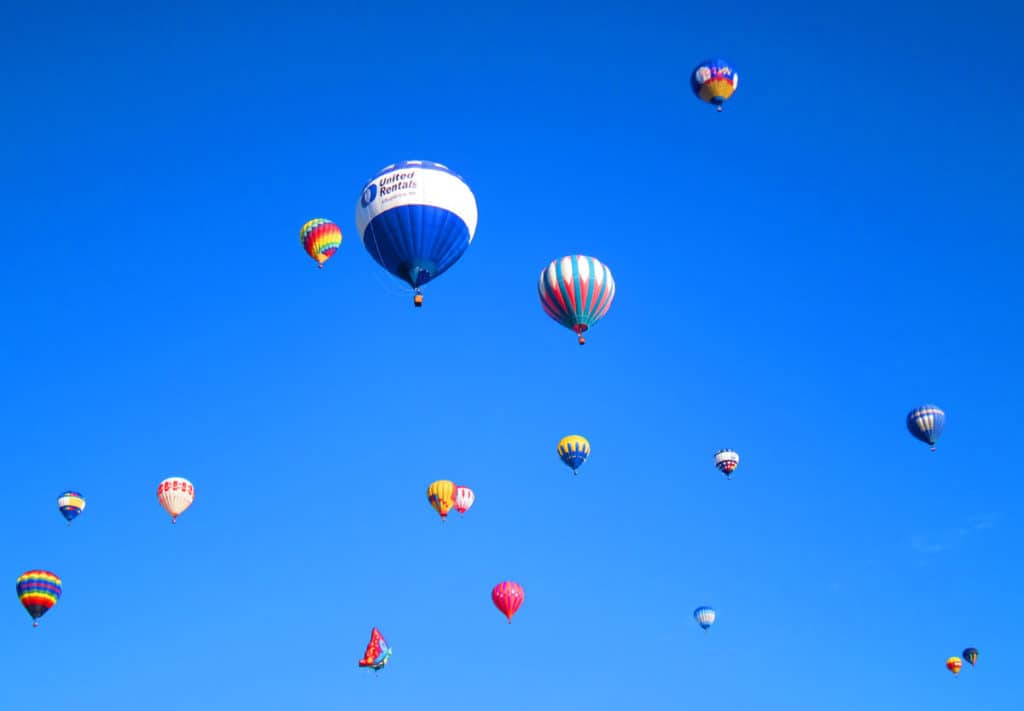 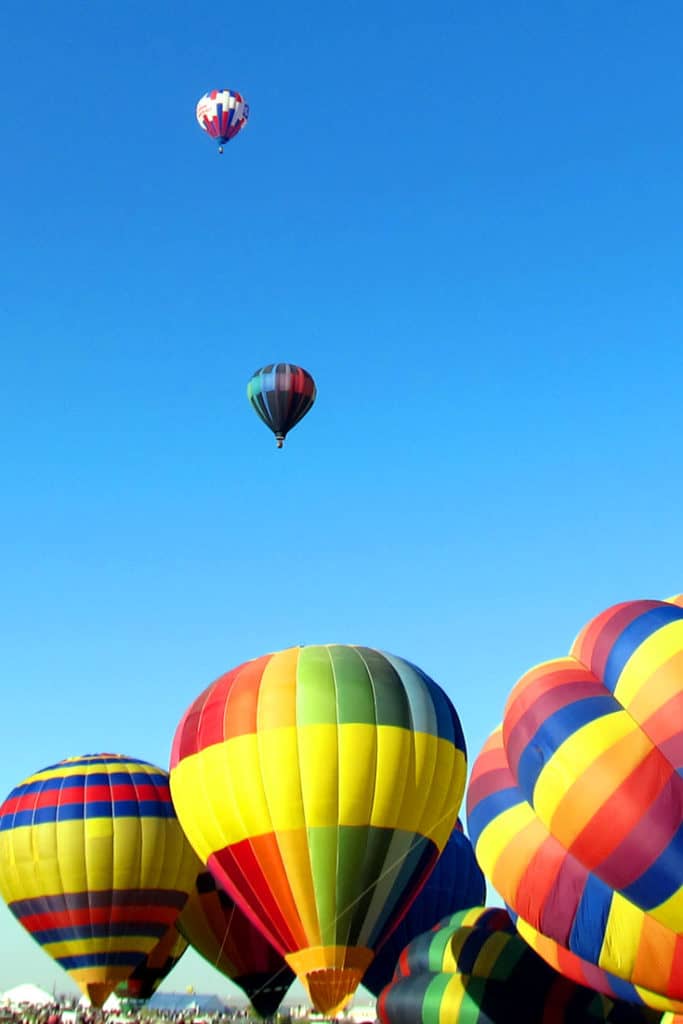 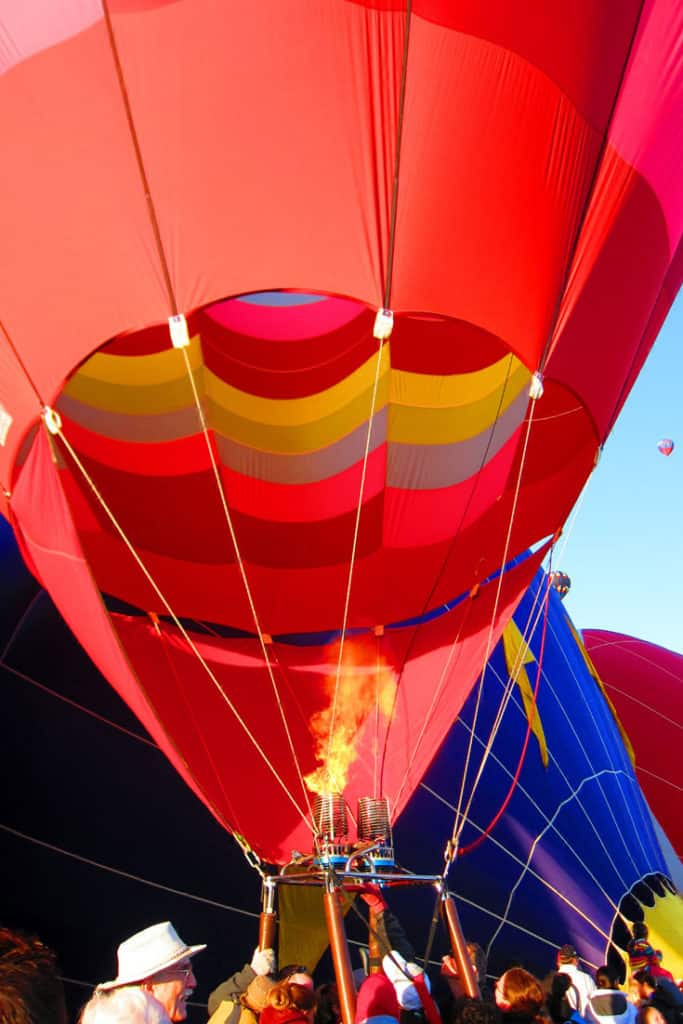 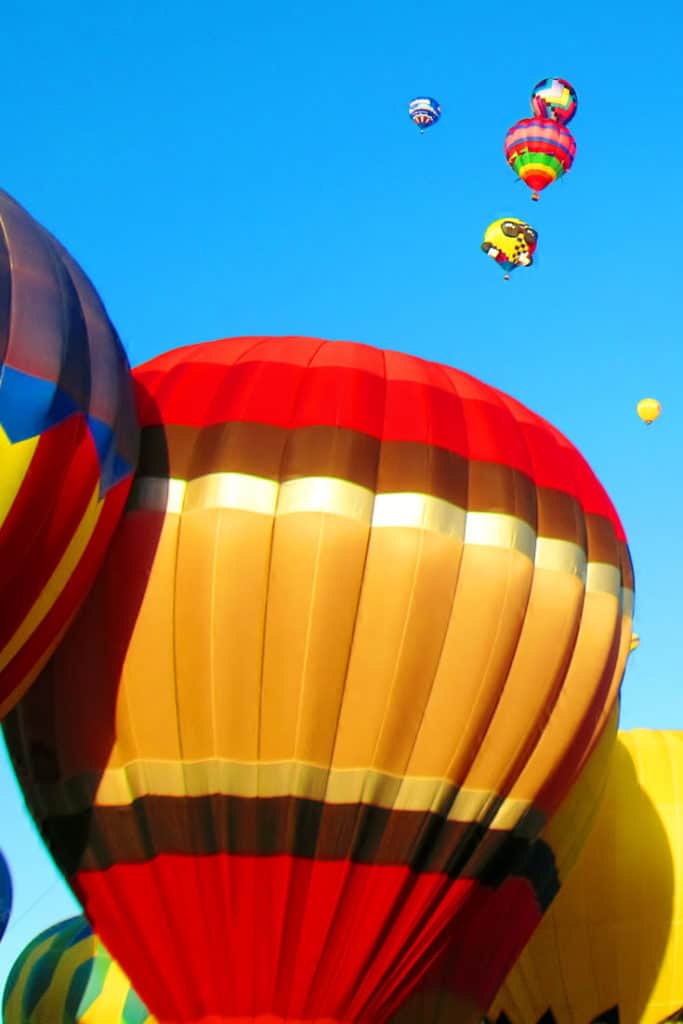