The city of New York isn't only a destination for the latest fashions, modern skyscrapers, and art. There are many hidden treasures throughout its five boroughs, including protected historic landmarks.

Don't miss out, and take a trip to the largest and most ethnically and linguistically diverse borough, Queens. The area was founded in 1683 and is located on the westernmost part of Long Island. 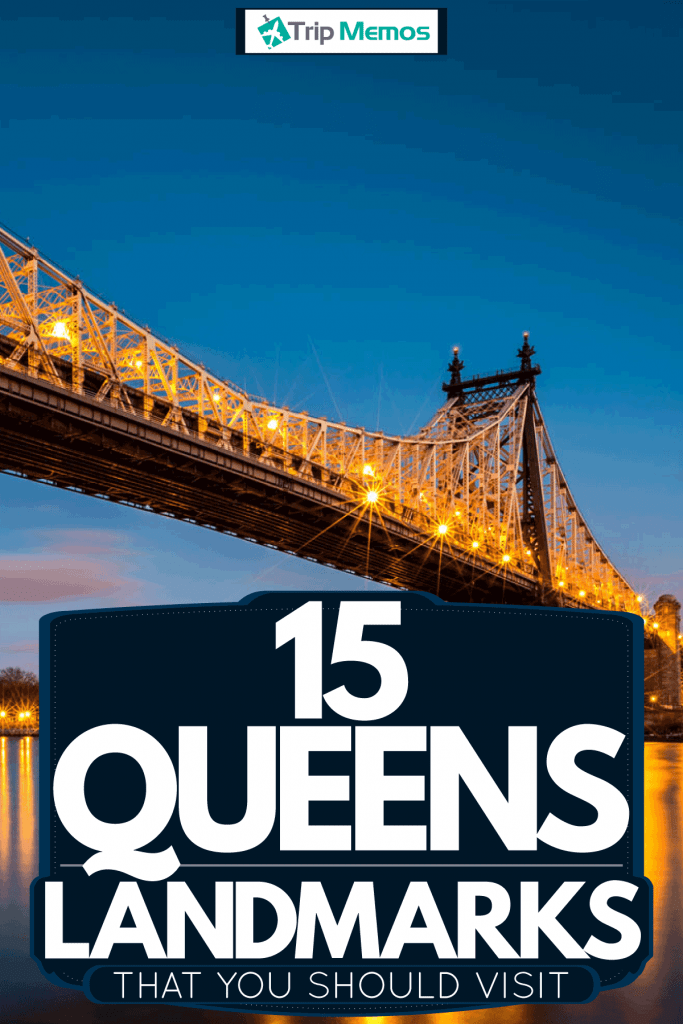 As a local, I've explored many of the hidden gems in Queens and will be sharing them here with you. Lace-up your walking shoes, have your camera ready, and get ready to transport yourself to a different side of "the big apple." 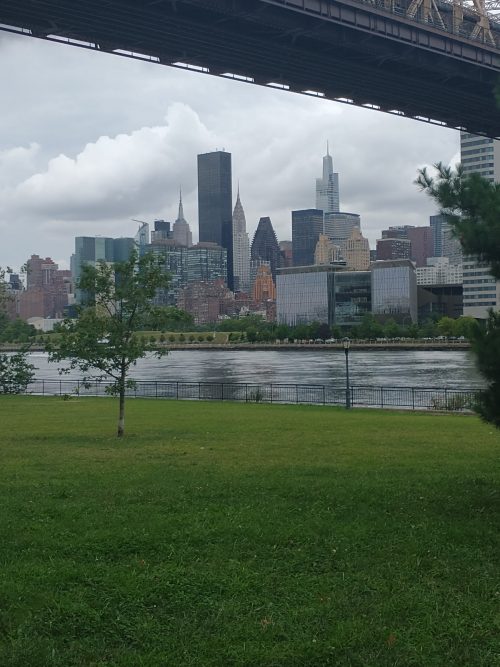 New York City is known for being a fast-paced, diverse metropolis located on the eastern part of the United States. And, taking a trip to "the city that never sleeps" definitely offers a unique experience like no other. Despite attracting crowds of people from around the world, it is one of the safest big cities to visit. Grab a map at a local metro station or stop at a kiosk, with a built-in charger for phones, to help you find your way around.

You'll want to dress for comfort and style, as walking or the subway is the most common way to travel. You can also rent a bike, hail a cab, or risk driving in traffic.  If you are feeling lost, don't be afraid to stop someone and ask. Most people are happy to give directions and suggest where to visit, shop, and eat on your journey.

Upon entering Queens, know that this borough is home to over 2 million people. Some of the most interesting neighborhoods to explore on foot are Astoria, Flushing, and Long Island City.

These three neighborhoods are close to Manhattan and offer a fascinating mix of homes, mid-rise apartment buildings, modern hotels, restaurants, clothing stores, and nightlife. Even among the neighborhoods within a borough of NYC, each one has its distinct flavor and highlights.

Although there are plenty of ways to get around the city pretty quickly, make sure to give yourself enough time to check out the places you want to see. Despite being in the same borough, I had to take more than one trip to immerse myself in the scenery, food, people, while traveling the largest borough in terms of area.

Thankfully, some landmarks are steps within one another, while others may require a 2o to 30 min walk or a couple of stops on the subway to see. Give yourself enough time to comfortably explore, and take time to get off your feet and do some people watching from a bench or restaurant.

How Do I Get To Queens From Manhattan? 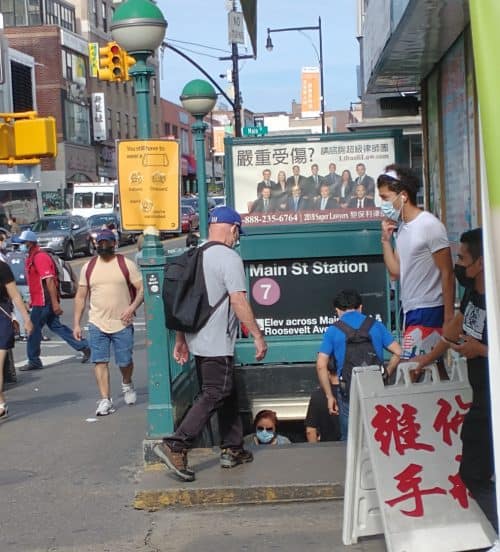 Assuming you are coming from Midtown Manhattan, you can walk across the Ed Koch Bridge or hop on a subway train to get into the outer borough. Unless you want to spend a lot of money and time in traffic, you may want to hold off on hailing a cab.

If you want to travel via a ride service, it is better to travel within a borough, rather than venture from Manhattan to outer boroughs. Of course, if you need to travel to one of NYC's airports, La Guardia, or JFK, there is a set fee based on your starting location. 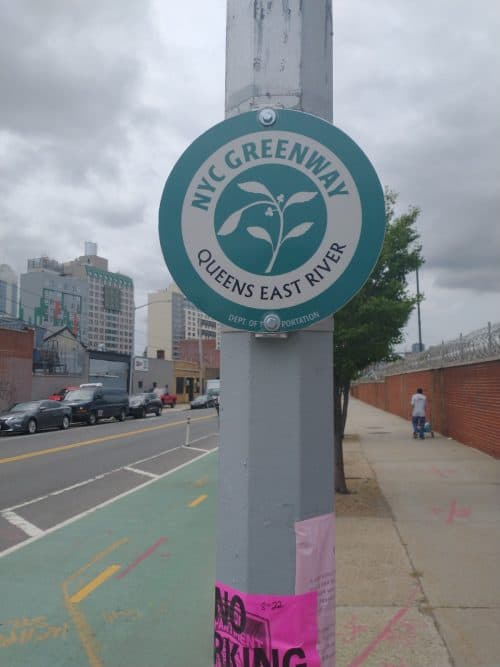 Take a ride on the 7 line, to visit Long Island City and Flushing. NYC's system of Greenways is a fantastic way to get around on foot or bike and there are connections between Astoria and LIC.

Walking is a lovely way to enjoy visiting NYC's boroughs, as you get to take in views impossible via the subway, bus, or car. Renting a bike is another green and refreshing way to get around NYC, as the city has taken initiatives to be more environmentally friendly.

Check out bike maps displaying routes for every borough before you go.

You can catch the 19 bus to travel between Astoria and Flushing.  Depending on your current location, you may need to take more than one train and a bus to reach a destination. Feel free to consult the MTA website before you begin your trip. On weekends, there may be service delays or reroutes.

Across from Manhattan, Long Island City, or LIC for short, offers amazing views of the skyline and East River.

Formerly and predominantly an industrial area, this revitalized neighborhood boasts trending restaurants, bars, art galleries, and shining high-rises peppered along the riverfront. Many creative professionals and artists can be found in this area, and film shoots are common. 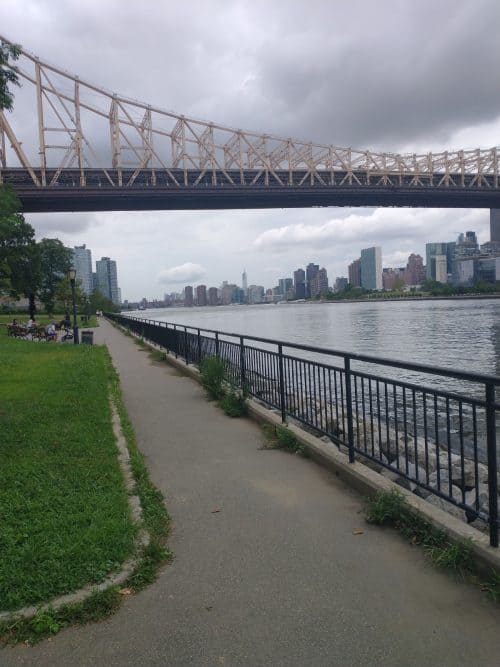 If you want to walk into Queens from Midtown Manhattan, the only way in is traversing Ed Koch Bridge. Also referred to as the 59th Street Bridge, it was completed in 1909. Note, this is one of the busiest connections between the Upper East Side of Manhattan and Queens, entering LIC.

The Ed Koch Bridge is prominent because it is a major stop along the NYC Marathon and Five Boro Bike Tour. As you make your way across the river you'll pass over Roosevelt Island. 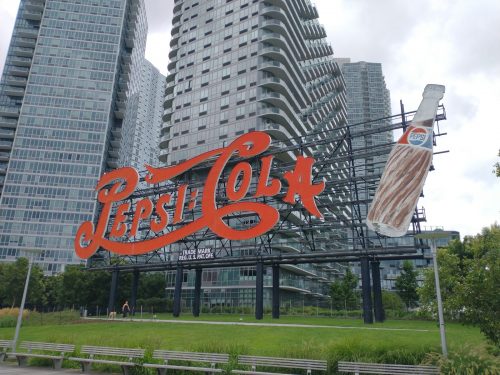 Soda lovers, rejoice! The Pepsi-Cola sign has been a major feature of Queen's waterfront, as this sign was a part of a Pepsi bottling plant that closed in 1999. As NYC is a huge supporter of creating landmarks and preserving history, the Pepsi-Cola sign was deemed a landmark in August 2016. You can see it clearly from across the East River in Manhattan. 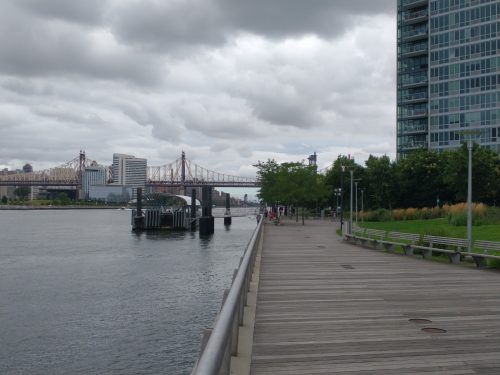 Stretch your legs or enjoy a view from a bench along this 12-acre riverside park in LIC.  Capture views of the Empire State Building or United Nations.

Check out the prominent restored gantries, which were used in the past on this waterway for unloading barges and floats. Visitors and residents alike come to this beautiful riverside retreat to enjoy concerts, playgrounds, and other recreational activities.

Astoria is known for its authentic Greek food, Italian pizzerias and bakeries, and trendy restaurants and nightlife locations.

The neighborhood is an attraction for young professionals, families, and foodies from all over. However, there are also landmarks like The Museum of the Moving Image, Noguchi Museum, and Astoria Park. 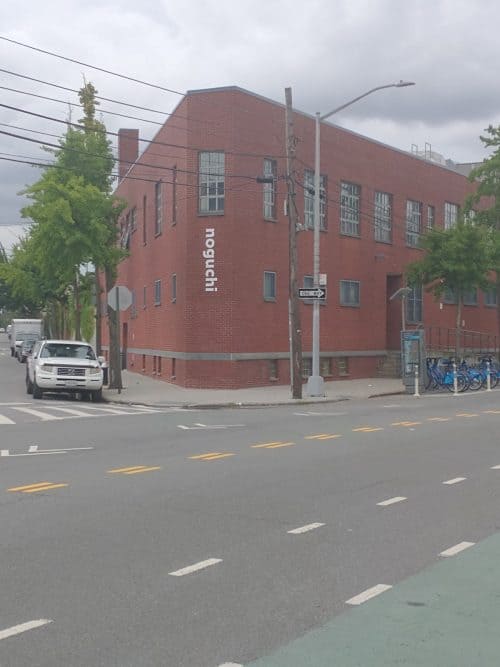 The Noguchi Museum was created in 1985 to promote appreciation for the art of sculptor, Isamu Noguchi. Today, the museum remains a popular attraction, as evidenced by the long line of patrons waiting to enter.

Across the street, a nearby city park has elements of contemporary art and sculpture, which is worth exploring too. 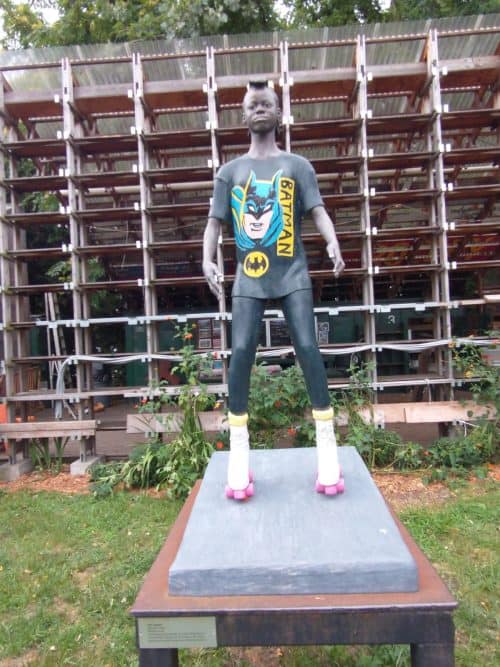 Only a few minutes' walk from the Noguchi Museum, visitors should take a gander at the Socrates Sculpture Park. The park is 5 acres in size and features a rotation of multi-media sculptures for public viewing and interaction.

Before exiting, one nice feature I loved about visiting Queens was the existence of free libraries, encouraging people to take a book or leave a one for others to enjoy. Have fun challenging yourself to find as many as possible and perhaps pick up a book or two to read!

Grab a seat on the 7 train and get off at Main Street, to enter the heart of Flushing, Queens. The old and the new coexist seamlessly in this neighborhood, as it is home to a historic United States Postal Office, attractions from the 1964 World's Fair, and modern homes and businesses. 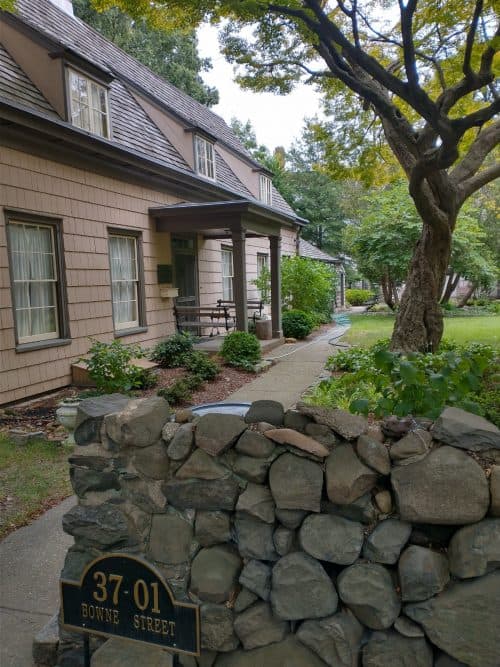 The Bowne House was built in 1661, and it still stands today because of preservation efforts. Because of the former owner, John Bowne, and his appeal for religious tolerance, the US Constitution writ into law, the right to assembly, free speech, and freedom of religion. 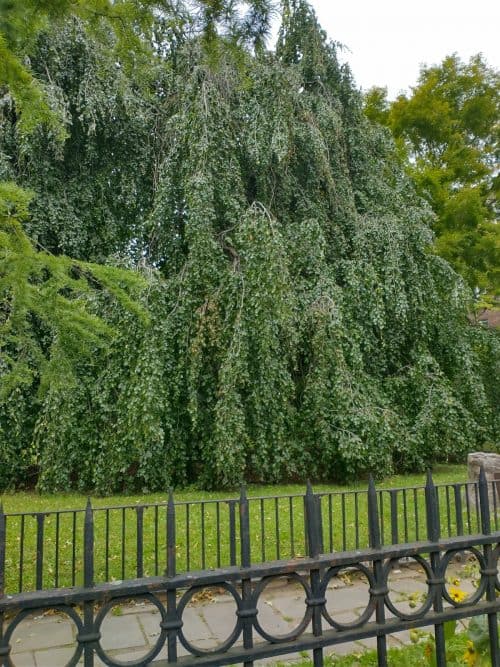 A few steps away from the Bowne House, another historical landmark serves as a reminder of NYC's past. The Weeping Beech was brought to America in 1846, as is the mother tree to all European weeping beeches in the country.

At first glance, this Queen-Anne style home doesn't appear to have a curious story. The home of African-American inventor, Lewis Latimer, was moved from its original location under threat of demolition to a new location where it now serves as a museum. Lewis Latimer was an integral contributor to the development of the telephone, lightbulb, and was self-taught. 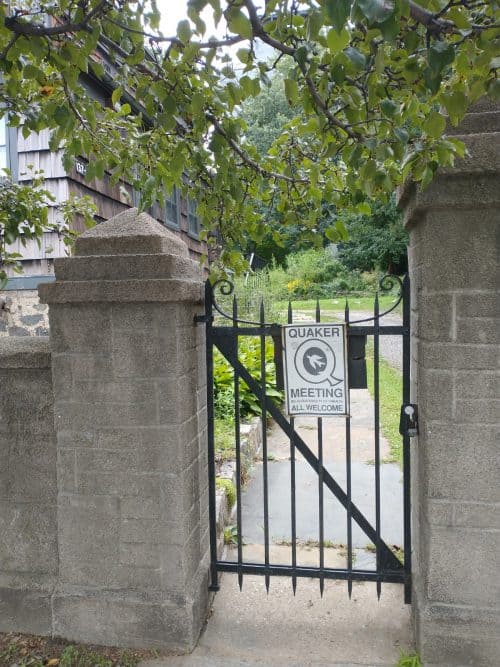 Not too far from the Lewis Latimer House, the Old Quaker Meeting House sits on Northern Boulevard.  The structure dates back to 1694, where it held its first meeting on November 24 that same year. Meetings are still held there to this day. 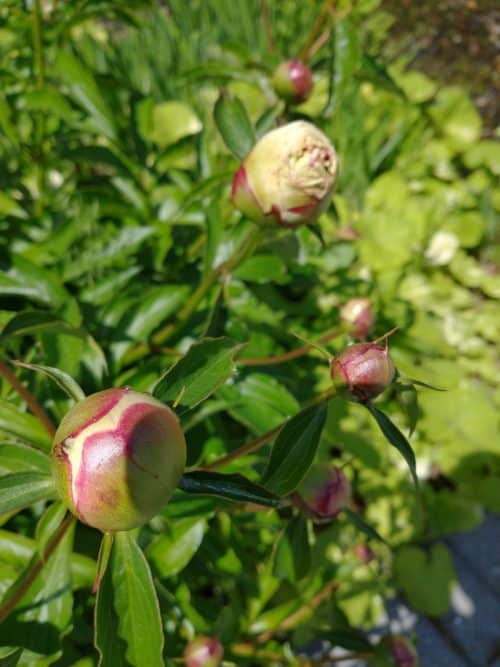 The warmer seasons are the perfect time to stop by the Queens Botanical Garden, but plants and green spaces are lovely year-round. Note, this is smaller than other botanical gardens in NYC, but it has its charm and boasts a LEED-certified visitor center with a rooftop garden.

One of the most iconic landmarks in NYC is in the borough of Queens, Flushing Meadows Corona Park.  It is the largest park in Queens, and the fourth-largest in NYC. It is home to the Queens Zoo, New York Hall of Science, the US Open, and other significant points of interest. 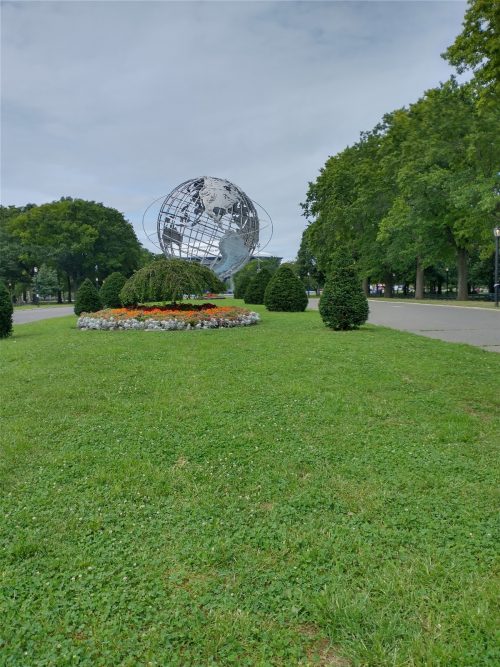 The Unisphere is no stranger to the camera or limelight, as it has made plenty of cameo appearances in commercials, television shows, and films. It was built by the American Bridge Company and designed by Gilmore D. Clark for the 1964 World's Fair. The Unisphere was built to show world interdependence and honor artificial satellites. 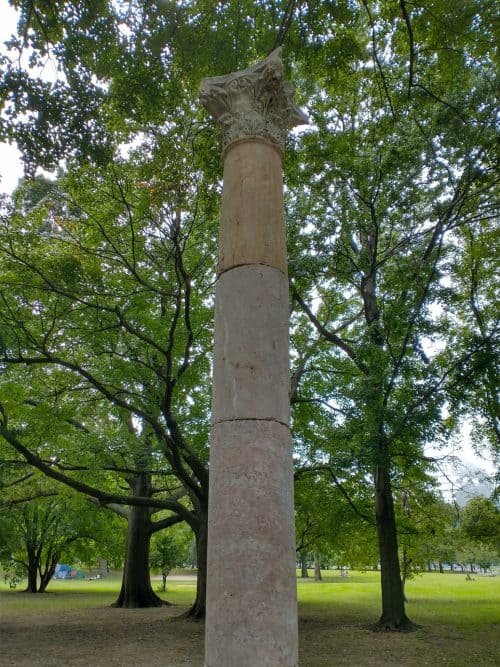 Who would know that NYC is home to an artifact that is over 2,000 years old! Tucked away in Flushing Meadows Corona Park, some steps from the Unisphere, stands the Column of Jerash.

The column was a gift to the New York World's Fair Corporation and NYC from King Hussein of the Hashemite Kingdom of Jordan in 1964.  The column was originally was built in 120 AD by ancient Romans and is 30-feet tall.

A few steps from the Unisphere, the Queens Museum awaits you to explore its halls. Inside, this institution boasts room-size model of NYC in its entirety. At the Queens Museum, there are programs and exhibits in support of education, the visual arts, history, and artifacts from the 1964 World's Fair. 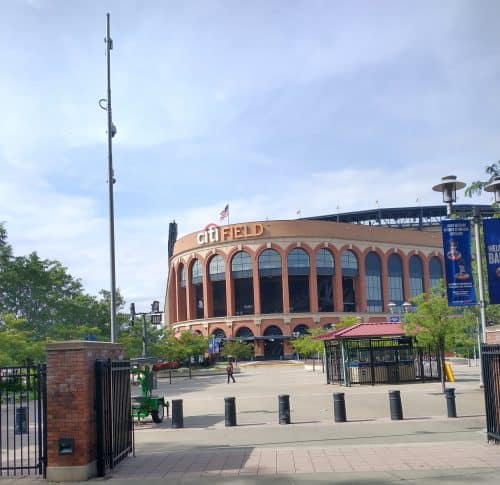 A little outside of Flushing Meadows Corona Park, Citi Field rises up to greet baseball fans of all ages. The home of the NY Mets was finished in 2009 and was built to replace The Shea Stadium. There are enough seats to fit 41,922 spectators and both Major League and college games are held at this location.

NYC is a city that must be experienced, as its essence cannot be captured by photographs, film, or anecdotes from people who have lived, worked, or visited this mega-city.

Do make sure to do the following if you plan on visiting landmarks in Queens.

There is so much to see and do in NYC, it is difficult to see everything on your itinerary sometimes. Queens is an incredibly diverse, cultured, urban space, and so many people call this borough home.

Visiting Queens and neighborhoods like Astoria, Flushing, and Long Island City are a real treat because they show such different perspectives of life in NYC. As you walk along city blocks, ride down bike paths, or watch the buildings and people change while moving on the subway, the city reveals itself.

Get Your Thrills At The Most Haunted Places In Spooky Savannah, Georgia

Ghostly Getaways: Uncover The Most Haunted Places In New Orleans