The invasion to Normandy, also known as D-Day, was an operation of  immense magnitude that changed the course of history. Today, Normandy offers visitors a huge array of sites, cemeteries, museums and memorials where they can commemorate the incredible story of the Allied Forces' invasion to liberate Europe. 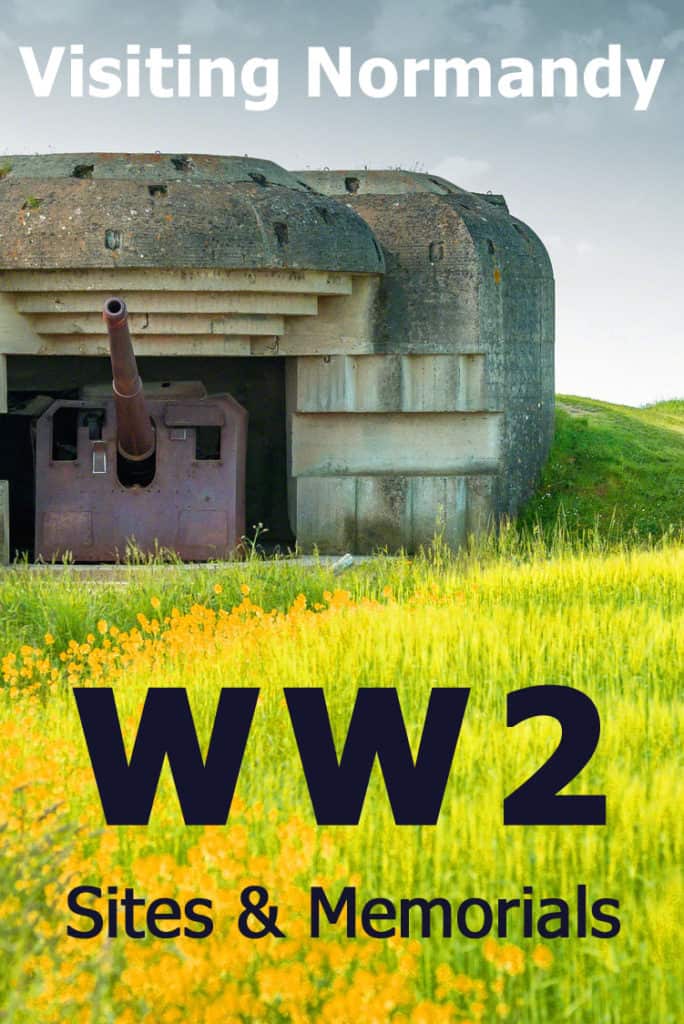 We'll be visiting Normandy this spring so I'm sharing this list I've prepared for our visit. If you're interested in more information, check out my list of non-WW2 sites you should visit when traveling to Normandy.

D-Day and The Battle Of Normandy

I won't attempt to tell this epic story in a blog post. After all, it's the topic of so many (long!) books and movies, and if you're reading this, you probably know enough about it already. If you want to refresh your memory, this BBC documentary may help. I like it because it just gives you a factual recount without trying to artificially add to the drama. They're right - it's dramatic enough without any cinematic embellishments.

My list includes historical sites, museums, memorials and cemeteries. Is it complete? Definitely not. There's even more to see and do for fans of the genre. Still, from everything I've read, these are the major and most highly recommended sites, so let's dive right in!

There Allied Forces landed on five beaches codenamed Omaha, Utah, Sword, Gold and Juno. The US military was in charge of taking over the first two beaches, the British took over the second two, while the Canadians were in charge of invading Juno beach.

All five beaches can be visited today. All five have various memorials, museums and other commemorative establishments along them.

Pointe du Hoc is a cliff between between the Omaha and Utah beaches. During Operation Overlord (D-Day invasion) US Rangers climbed up the cliff and held this strategic point against German counter-attacks in one of the heroic battles of that day.

You can visit Pointe du Hoc today to see the remains of the German fortifications. There is a small museum there as well and a memorial at the very end of the clifftop. 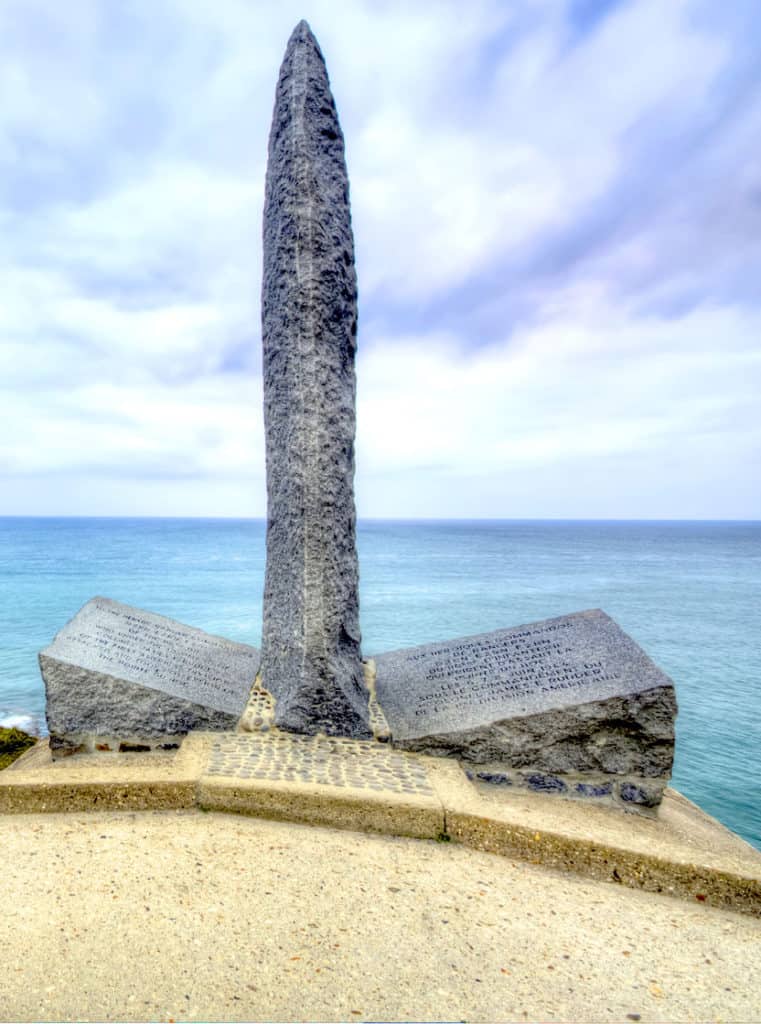 During Operation Pegasus, a British infantry unit used gliders to land directly at key bridges along the Caen canal in Normandy. The Bénouville Bridge at the town of Ranville was one of them. Today it's the site of a memorial and museum about the operation. The original bridge was removed in 1994 and is on display on the museum grounds.

The Germans knew that the Allies would eventually attack the coast of France. Hitler's defense strategy included fortifying the entire coastline to create what became known as "The Atlantic Wall". There are several sites you can visit to see the Atlantic Wall in Normandy with these being the most popular -

The Battery of Longues sur Mer

You can visit on your own or join the local tourism office's guided tours at 5 euro per person. 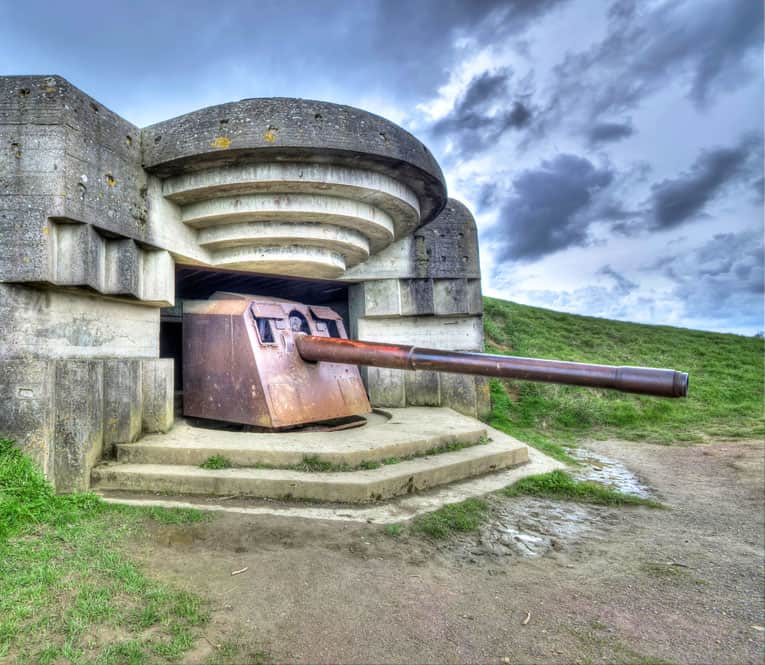 The Battery of Azeville

You can pick up a self-guided audio tour from the visitor center or join a guided tour. Opening hours: 10am-7pm during June-August / 11am-6pm during September / 2pm-6pm during April, May & October Admission fees: 5 euro for adult (2 for youth) Website

The local museum comes highly recommended and includes a light & sound show in one of the bunkers.

The original German bunker - six storeys deep! - which commanded the line of artillery batteries along the shores of Normandy. It's now fully restored with authentic artifacts on display.

It almost seems like every town in Normandy has its own WW2 museum...

The town of Caen was a strategic point fought over by the Germans and Allies for weeks after D-day. Today it's home to one of the largest museums in the area which covers WW1, WW2 and the Cold War.

Opening hours:  9am-7pm (shorter on some months) Admission fees: 19.5 euro (17 for youth) You can get combined tickets for this museum and the  Arromanches 360 experience). Address: Esplanade Général Eisenhower, CS 55026, 14 050 Caen Website

Not exactly a museum, this place offers a unique cinematique experience with original D-Day footage projected on a 360 degree-screen.

Two museums, a trail and a C-47 plane simulator where you can be the paratrooper.

Even if you don't end up visiting the museum, it's worthwhile to stop at the nearby beach where you can see the remains of the original Mulberry harbours (mobile harbours developed for D-Day).

A visitor center and park, dedicated to the Canadian invasion at Juno beach.

There are 24 military cemeteries in Normandy and they include British, American, Canadian and even German ones. Although not all of the soldiers who were killed in this area are buried here - many bodies were returned home, at the request of their families - you can still pay your respects to the fallen in these peaceful yet somber places.

Here is a link to the full list of military cemeteries in Normandy and a short description of the three that visitors recommend the most.

This is the last resting place of 9,387 American soldiers. Among them is President Roosevelt's son, Brigadier General Theodore Roosevelt, Jr. who lead the first wave of invasion at Utah beach.

The British War Cemetery at Bayeux

More than 4,000 British Commonwealth soldiers are buried in this cemetery. There is a memorial here as well, with an epitaph in Latin that reads "We, once conquered by William, have now set free the Conqueror’s native land." It's interesting how history plays out, isn't it?

The German Cemetery at La Cambe

This is the largest of all military cemeteries in Normandy with more than 21 thousand graves of German soldiers.

And finally, putting all of these amazing places on one map. If you want to see what's what, just click on the icon in the top left corner.

We're going to choose at least a few items out of this list for our up and coming trip to Normandy. My husband and I are fascinated by the military history but I think we'll have to limit ourselves so that the boys won't get too bored.

If you've visited Normandy and have specific recommendations for us - or if there's anything else you'd like to say! - do leave a comment!

10 Top Things to Do in Brasov, Romania

What Plug Adapter Do You Need for the UK?

Is It Safe to Travel to Romania?