Visiting Israel? Have an hour or two to spare while traveling along the coastline? Why not stop at this nature reserve for a fascinating stroll that combines nature, wildlife and tons of ancient ruins? We did just that a couple of weeks ago, so today I'm sharing our trip report, plus some tips on how to make your visit there just perfect. 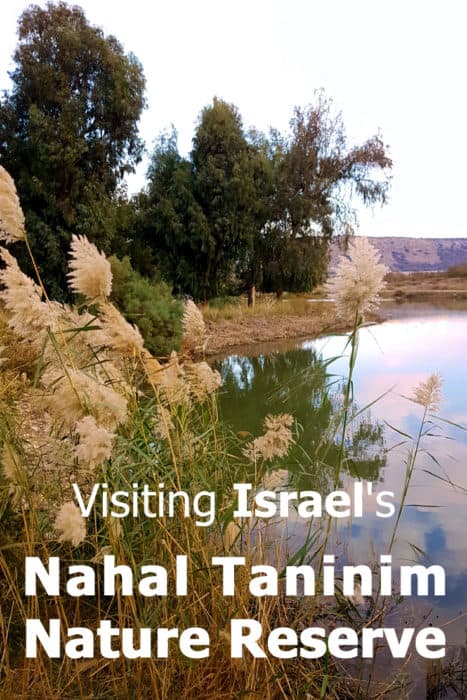 That's ok. There are hundreds of nature reserves in Israel and you probably never heard of most of them. They are usually relatively small areas with unique ecosystems or archeological finds - or both, as is the case with Nahal Taninim. Once declared as a nature reserve, these places are protected from the threat of urban development. Just like national parks, these nature reserves are managed by the Israeli Nature and Parks Authority. They offer visitors maintained trails and sometimes a small visitors center as well.

Nahal Taninim is one such area. Less than a square mile in size, it's a gem of a place that showcases archeology from four different periods as well as unique local fauna and flora.

What's with the strange name?

Well, it only sounds strange if you speak Hebrew. In Hebrew the meaning is the name is pretty straightforward, yet nonetheless exotic. The word "Nahal" means stream and the word "Taninim" means crocodiles. Yup, crocodiles. In fact, the ancient hellenistic settlement that was here a couple of thousands of years ago was called Crocodilopolis. Don't confuse that with another crocodilopolis in Egypt though. This is a different one.

Why, of course! Israel is a bridge between Africa and Eurasia and many African species used to wander around these parts, up until a few hundreds years ago. Crocodiles - and hippos too! - made Nahal Taninim their home, as late as three hundreds years ago. Pretty neat, isn't it? In fact, the last documented sighting of a crocodile was in 1912. Not that long ago, really. 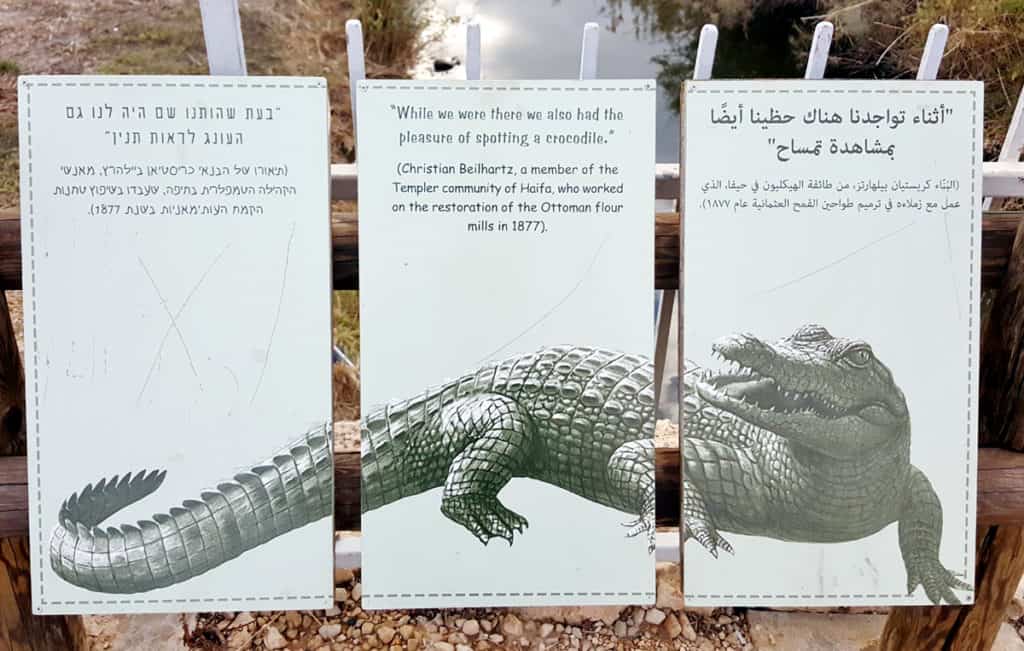 The Unique History of Nahal Taninim

Don't let the term "nature reserve" fool you. This place is about history and archeology as much as it is about nature. The story begins in ancient Roman times, goes through the Byzantine and Muslim periods on to the Ottoman empire's time. It then continues on to modern times with a twist in the plot taking place in 1992!

The story actually begins with neighboring Caesarea which used to be a major city in the Roman Empire. Industrious Roman engineers created a complex system of aqueducts, canals and dams to bring water to the city of Caesarea, the remains of which are visible all over this region. In Nahal Taninim, the Romans blocked the water to create a huge reservoir, allowing them to bring up the water level before sending it on to Casearia via an aqueduct.

The floodgate created a regulated stream of water - quite a rarity in ancient times, at least locally. The locals used it to activate flour mills for more than a thousand years, during the Byzantine, Muslim and Ottoman periods .

By the early 20th century, the mills were no longer in operation. The floodgates became covered with silt and vegetation. The reservoir turned into a small lake surrounded by marshland and the place was abandoned.

Enter the zionist movement. Baron Edmond de Rothschild really had a thing for this area and he's the one who provided the funds for expanding the infrastructure in Nahal Taninim. The money went towards an ambitious project: Drying up the lake and surrounding marshes. This was not an unusual concept back then. Drying up swamps and turning them into inhabitable areas was part of the overall plan to take over the land of Israel. These people were all about terraforming. In Nahal Taninim, they used a system of clay pipes to divert the water into the sea and most of the lake vanished.

Fast forward to the winter of 1992. Israel experienced some of the heaviest rainfall ever recorded. The pipes were no longer enough and the old Roman dam flooded the area once again, this time covering nearby fields and roads. This had happened before during wintertime but never to this extent. Something had to be done but how would you avoid damaging the precious archeological site?

Teams of archaeologists were called in for an emergency operation. The ancient dam was methodically uncovered and the water canals cleared of debris. The result? No more floods! And an added bonus: a new nature reserve and archeological site for the public to enjoy. Win-win!

So, now that you know all about the history of this unique place, here's why you should visit Nahal Taninim.

What to see and do in Nahal Taninim reserve?

Israel has always been densely populated and people need water. By the end of the 20th century, all natural streams were used, abused, polluted and nearly destroyed. The Taninim stream survived though. What saved it was the water's salinity. The fountains that feed the stream include some that produce salty water, which meant that historically, locals could use the water for operating flour mills but not as drinking water or for irrigation. They allowed the stream to keep flowing, preserving the delicate ecosystem around it.

Today, visitors can see an abundance of local plants, including Tamarisks - also known as salt cedars - and yellow water lilies. The wildlife is mostly nocturnal and hidden from view but if you're very lucky, you may be able to spot a mongoose or even a genuine swamp cat.  There's life in the water too, with  14 species of fish. The catfish are easy to spot as you hike along the stream.

If you're looking to see as much archeology as possible in Israel, you'll love Nahal Taninim. You only have to walk for a couple of hundreds of yards to see the Roman dam. It's a huge stone wall, almost 200 yards long, with reconstructed gates that are used to let water through. 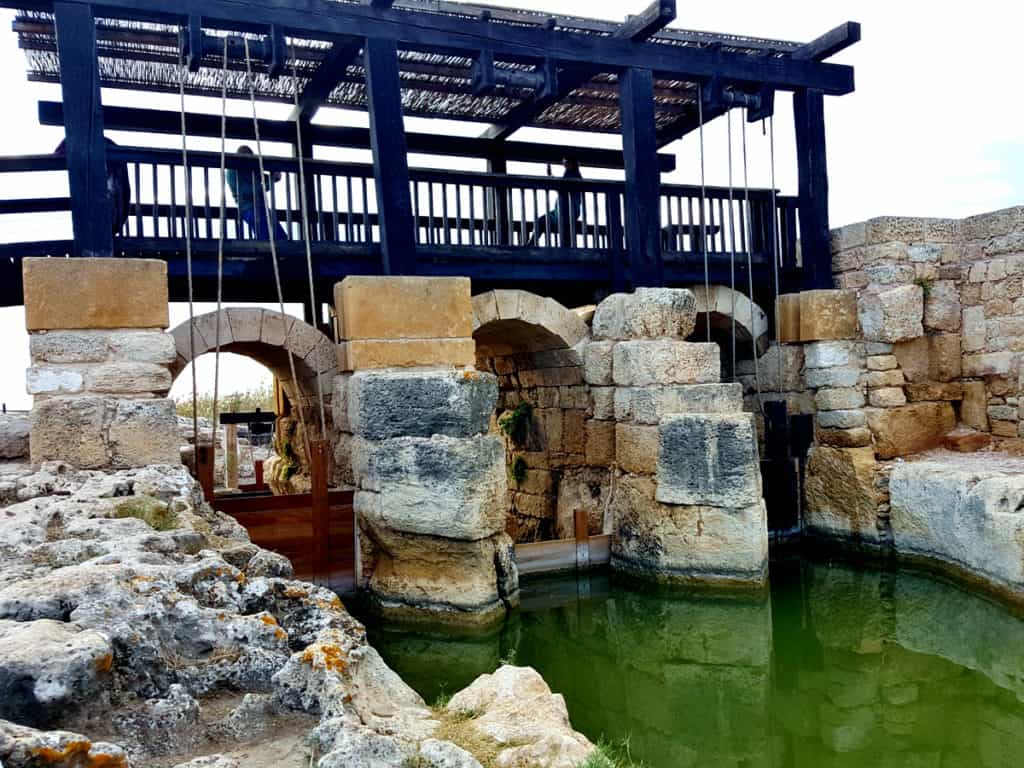 You'll also see the Byzantine flour mills, with their reconstructed wooden wheels, and the remains of the clay pipes that were used to dry up the area just over a century ago. Last, but not least, you can walk by and even through some of the ancient Roman canals! Thousands of years ago, the canals were actually going through covered tunnels. They are open today, with a few reconstructed stone arches along them, suggesting what the approximate size of the tunnels used to be. 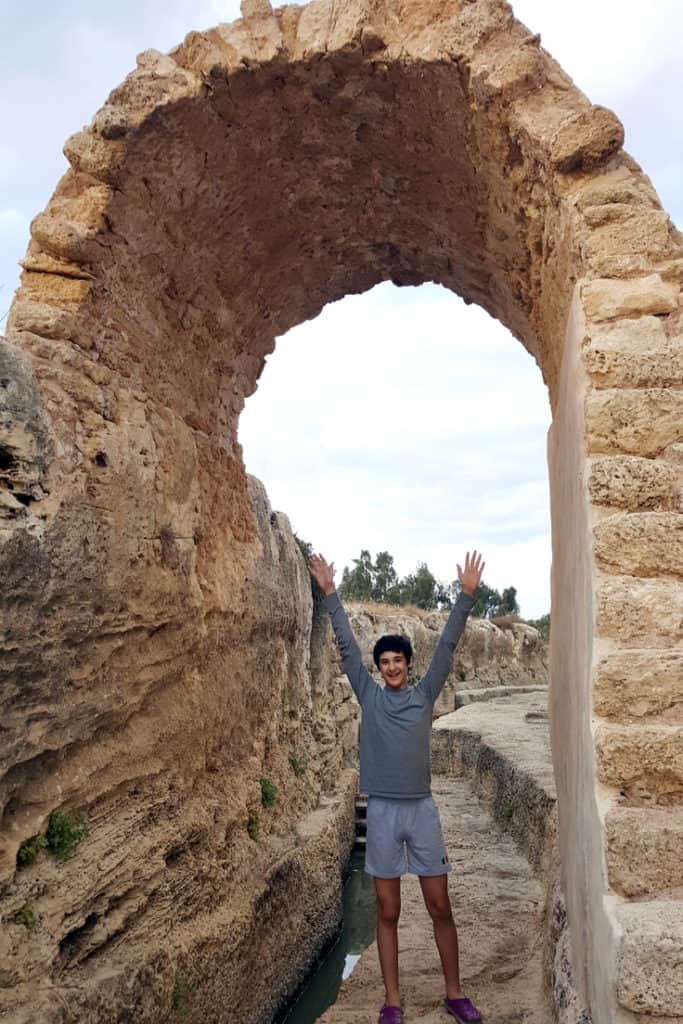 Nahal Taninim offers visitors three well-maintained easy trails. They're not wheelchair-accessible, except for a short section that takes you to the Roman dam and back. If you're visiting with babies or toddlers, a baby carrier will probably be better than a stroller.

When we were there in December 2016, they didn't have a good brochure in English, so here's what the trail map on the Hebrew brochure looks - 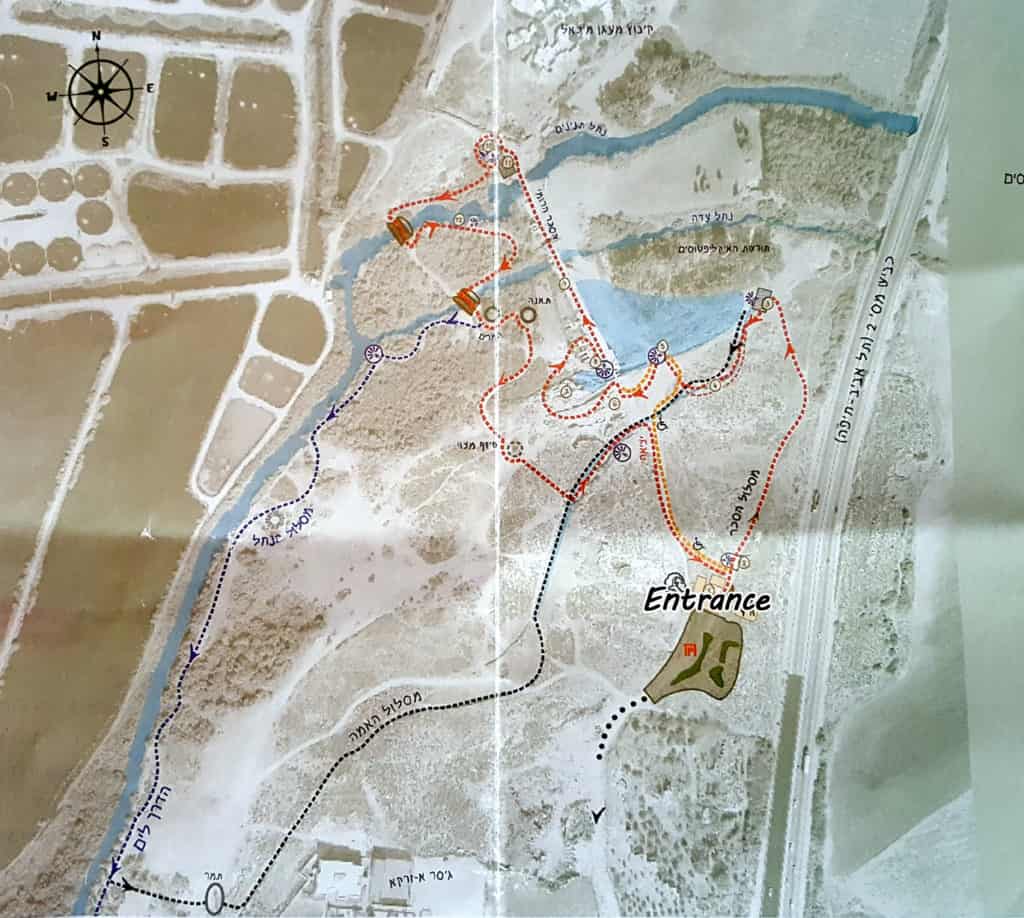 The dam route (the red trail)

This is the red trail on the map and it's also marked with red blazes along the way. It takes you along the major archaeological sites including the Roman dam, the Byzantine flour mills and the Ottoman flour mills. There is a lovely short section of the trail that goes above the water too. 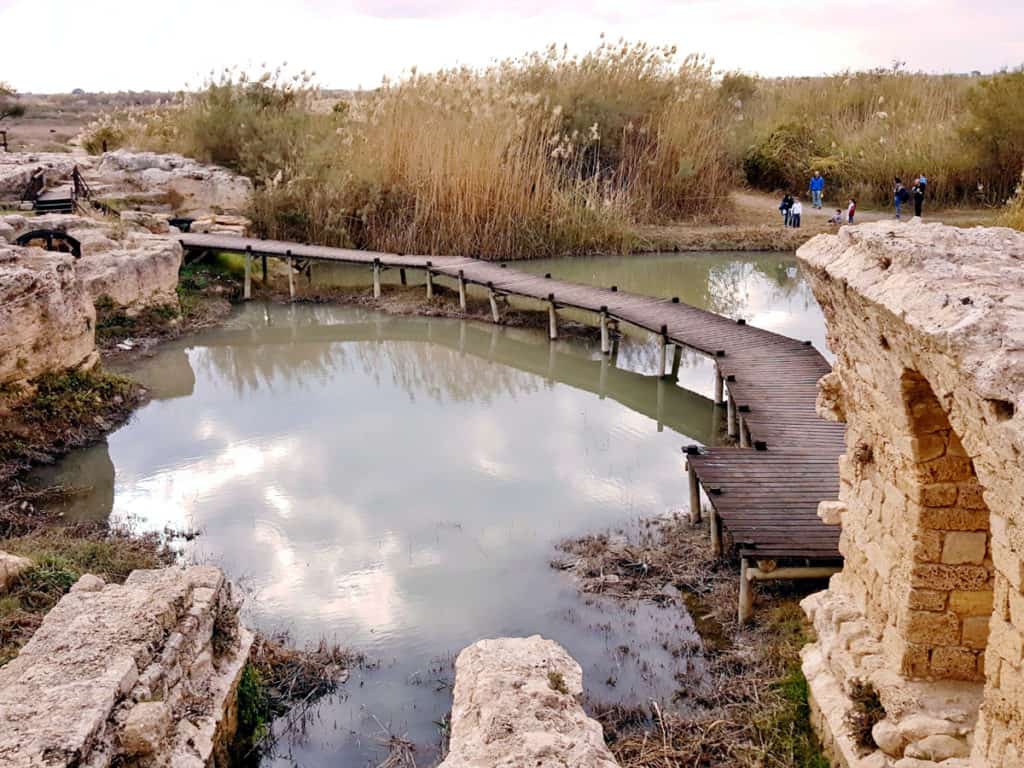 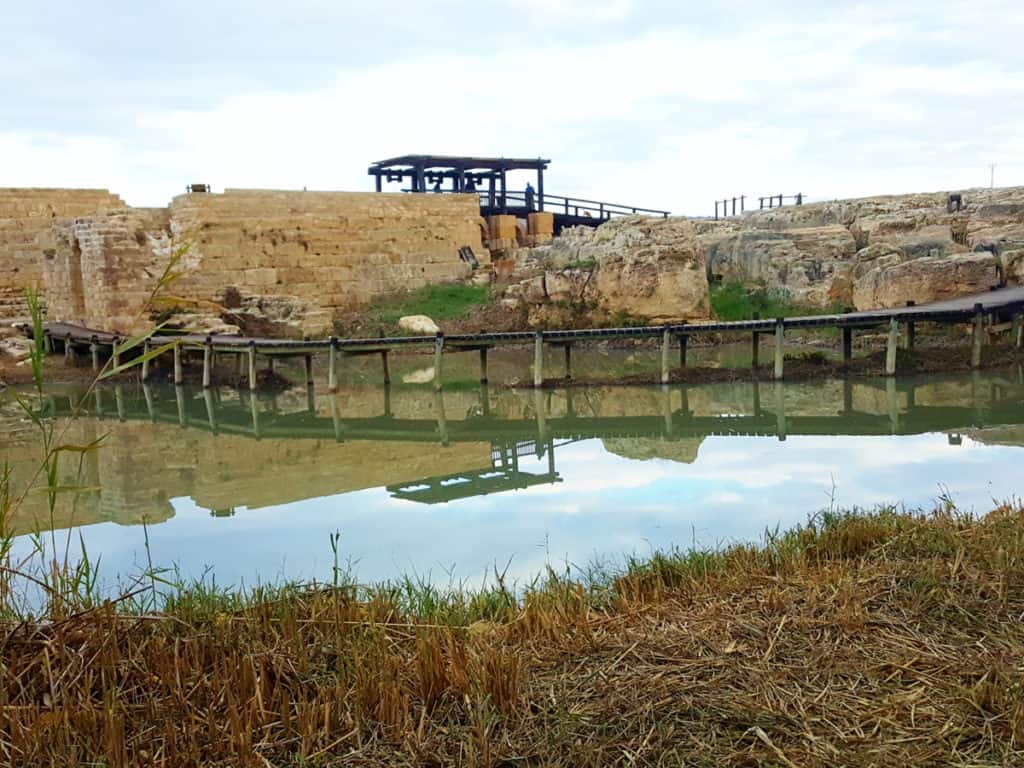 You then reach the stream itself, crossing two bridges on your way.

Finally, you return via a section of the ancient canals and back to the visitors center.

This is an easy short loop trail, about a mile long. Even if you take the time to fully enjoy the sights, take pictures and read the signs, it shouldn't take you more than an hour. Perfect for families and a great option for anyone who wants to make a quick stop en route to Haifa or Caesarea, to take in some nature and ancient ruins.

To reach this trail, you first hike through half of the dam trail, so you get to see the main archeological sites. After crossing the second bridge, you can take a right turn to a trail marked with blue blazes. This is the stream trail and it takes you for a nice short hike along the Nahal Taninim stream.

This trail is also part of the National Israel Trail, meaning you'll see its blue, white and orange blazes too. You can continue along the Israel trail all the way to Caesarea if you wanted to. That's only three miles along the trail, so definitely doable. The blue blazes of the stream trail end at an intersection with the next trail in this park. If you want to get back to the visitors center and parking lot, turn back or use the water canal trail.

The aqueduct route (the black trail)

If you're visiting on a hot day, this is the most fun trail of all! You make your way inside the ancient Roman aqueduct! It's about half  a mile long and quite the adventure for kids. 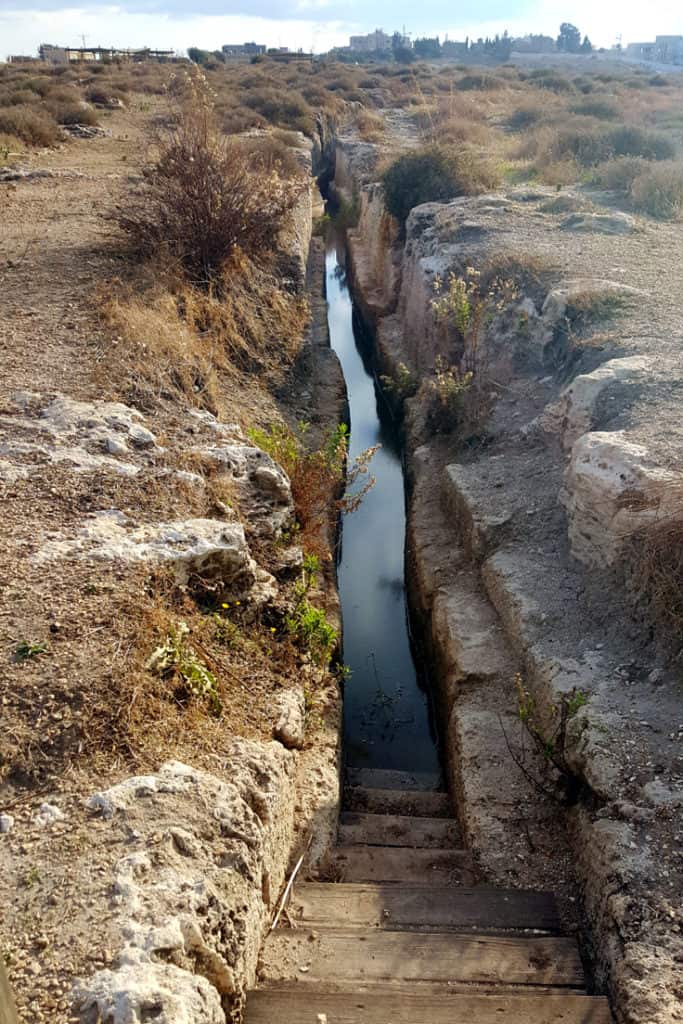 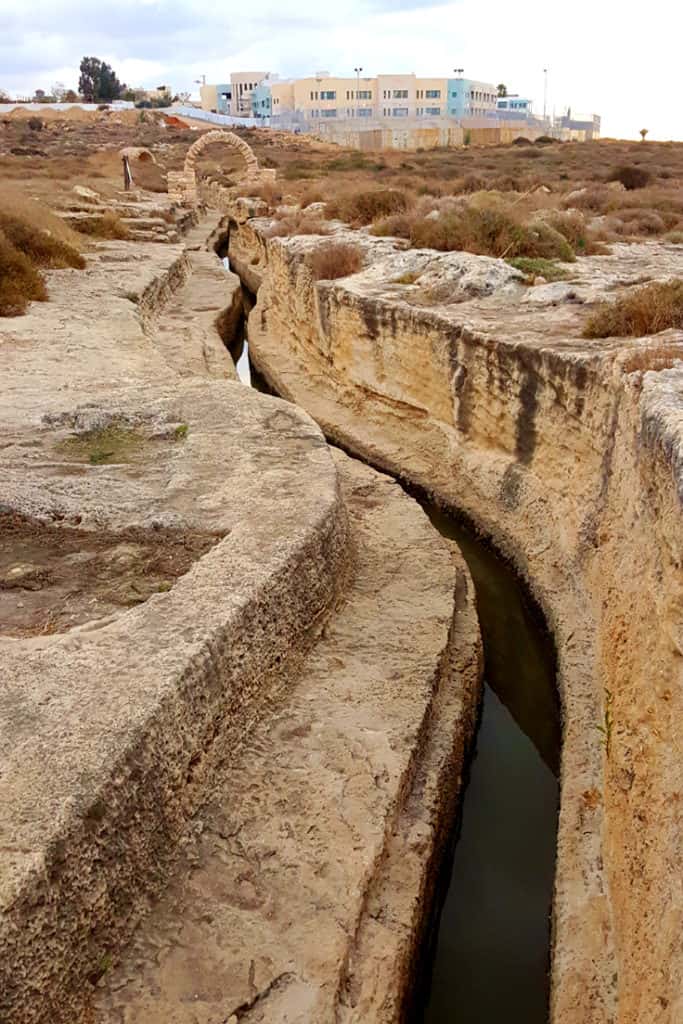 The trail ends in the intersection with the Stream route so you can either walk back through the canal or turn this into a loop by joining the blue stream trail and getting back to the visitors center using the orange Dam Trail.

So, which hike should you choose?

If you don't have a lot of time to spend, stick to the Dam Trail.

If you have another hour (or you're very fast), add the Stream Trail as well. On a warm day, or if you don't mind getting your feet into semi-cold water turn this into a loop by using the Canal Trail to get back to the visitors center.

Nahal Taninim Nature Reserve is located along the coast of Israel, roughly between Haifa and Tel Aviv. The nearest tourist attraction is Caesaria. If you're driving along the coast, it's a great little stop where you can stretch your legs and do some sightseeing for about 1-2 hours. 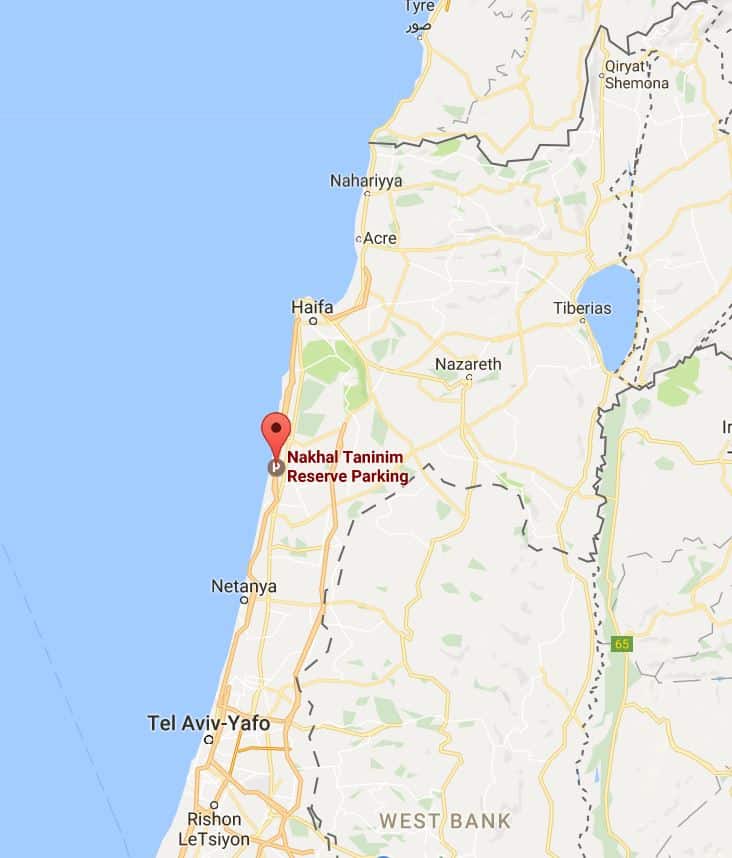 The reserve is open seven days a week. Summer opening hours are 8am-5pm on weekdays and 8am-4pm on Saturdays. During winter they close the place an hour earlier.

There's a parking lot next to the entrance. It can get crowded on Saturdays and holidays but there is overflow parking as well.

Expect to pay 22 shekels ($5.5) for an adult and 9 shekels ($2) for kids under 18. Senior citizens pay 11 shekels ($3). Free for national parks annual card holders. This card currently costs 181 shekels ($45) for a single ticket holder or 396 shekels ($99) for a family of four. Probably not worth it unless you're going to visit 10 or more national parks and nature reserves while in Israel.

You enter the reserve through a small building. This is where you buy your tickets. You can buy snacks and drinks there as well. On weekends they have a Druze booth serving freshly-baked Druze pita bread with cheese or chocolate spread.

So, there you go! That's everything you need to know about visiting Nahal Taninim nature reserve in Israel. If you find yourself driving along the coast, consider stopping here for an hour or two for a unique combo of nature and history.

Let me know what you think of Nahal Taninim. Would you consider visiting this reserve? Oh, and if you have any questions about Nahal Taninim or anything else related to visiting Israel, leave me a comment and I promise to do my best to help!

8 Best Hotels in Tel Aviv on the Beach