You can certainly swim in Florida in the wintertime. Florida boasts some of the best water temperatures in the continental United States, year-round. But just because you can swim doesn't mean that the water temperature is going to be warm. If you're sensitive to the cold, you may want to consider a wetsuit for your Florida winter trip.

The best time of year to swim in Florida is going to be between April and October when the water is going to be the mildest. The water temperature is usually going to be warmest the farther south you go in the state. If you're heading down towards Key West or Naples, you probably won't have an issue swimming. Also, keep in mind that anything on the western coast of Florida is bound to be warmer because the Gulf of Mexico is actually warmer than the Atlantic.

Where Is The Warmest Place In Florida In The Wintertime?

The warmest average temperature in Florida is going to be found in the Miami area. What's an average year-round temperature of about 74 degrees it is 1 comfortable place to be. That's just the average temperature; in reality, it's usually up around 80 degrees. Orlando's generally about 10 degrees colder, which still isn't bad.

In the wintertime, the Everglades boasted a temperature of about 71 degrees. That's during the day. No matter where you go in Florida in the wintertime picture won't be cold by most standards. Across-the-board, the temperature spread in Florida is pretty close. No matter what time of year you're visiting, the morning and evening are both going to be the chilliest time.

Is It Warm Enough To Swim In Orlando In February?

The water temperature during the wintertime in Florida is going to be between the mid-60s and low 70s. So it's definitely going to be warm enough to swim in. Especially compared to somewhere say like North Dakota. If you're going to swim in the ocean, you might want to use a wetsuit this will keep some of your body heat in and the chill of the water out. Most of the hotel swimming pools are actually heated. So yes, you can definitely swim in them during the winter.

Can You Swim In Florida In March?

You can definitely swim in Florida in March. This is just before the peak swimming season starts in Florida. Water temperatures are beginning to rise, and the weather patterns are usually lovely. The water may still have a chill on it, especially in the morning and in the evening. Temperatures around Sunrise are generally around 53°. Temperatures in the early evening are usually down in the low 70s. The locals might look at you a little bit funny, but you can definitely swim.

Is Florida Warm All Year round?

In this case, warm is a relative term.

Compared to the desert, it's not going to be heated. Compared to the rest of the United States, it will be warm in the wintertime. Spring is usually a very comfortable time in Florida. The daytime temperatures are generally in the mid-80s with a gentle breeze. Summertime in Florida can be hot and muggy.

This is also the rainy season. Sometimes you can tell whether the rain is falling down or up. With its subtropical climate, Florida is a beautiful destination, no matter what time of year. The northern portion of the state is usually a little cooler than the southern part. So your relative warmth is going to be in relation directly to your geographic location in Florida. The Panhandle is definitely a little chilly. Keep in mind that the entire state is subject to cold snaps in the winter. Warmth is not a direct science, and you can't predict it. It does occasionally snow even in Florida.

Is Miami Warmer Than Orlando?

Bring a swimming suit along

Whenever you're traveling, it's always a good idea to bring a wide range of clothing with you. No matter what time of year you're going, don't forget to bring your swimsuit to Florida and be prepared for anything. If the weather is nice, you might just use it to take a dip in the hotel pool - or for a more adventurous outing to the beach, or a local swimming hole.

Consider a wetsuit too

If you're bent on swimming in Florida during wintertime and don't like cold water, a wetsuit might actually be a good idea. This is especially true if you plan on swimming with manatees. Manatees go further inland during wintertime, searching for warmer water, but that temperature may still be too low for comfort for most people.

The solution is to wear a wetsite that helps insulate you from the cold. Here's a recommended model (Amazon link) -

If swimming with manatees is the focus of your trip, take the time and plan ahead. Many state parks and reserves don't allow swimming, to prevent people from bothering these delicate creatures. Your best bet may be to take an organized tour. Tour operators can get you to an area where swimming with manatees is legal. They also know the best spots to find the most manatees, which gets you the best chance for an encounter.

These operators often provide visitors with wetsuits when needed. That's where planning ahead comes handy - you may not need to buy one of your own and bring it along.

Florida can be fun - all year around

As with every destination, you need some luck in getting the best possible weather, but in Florida, there's a good chance you'll get just that during wintertime. Swimming is a definite option. With a swimsuit if you don't mind cool water, or with a wetsuit if you do. 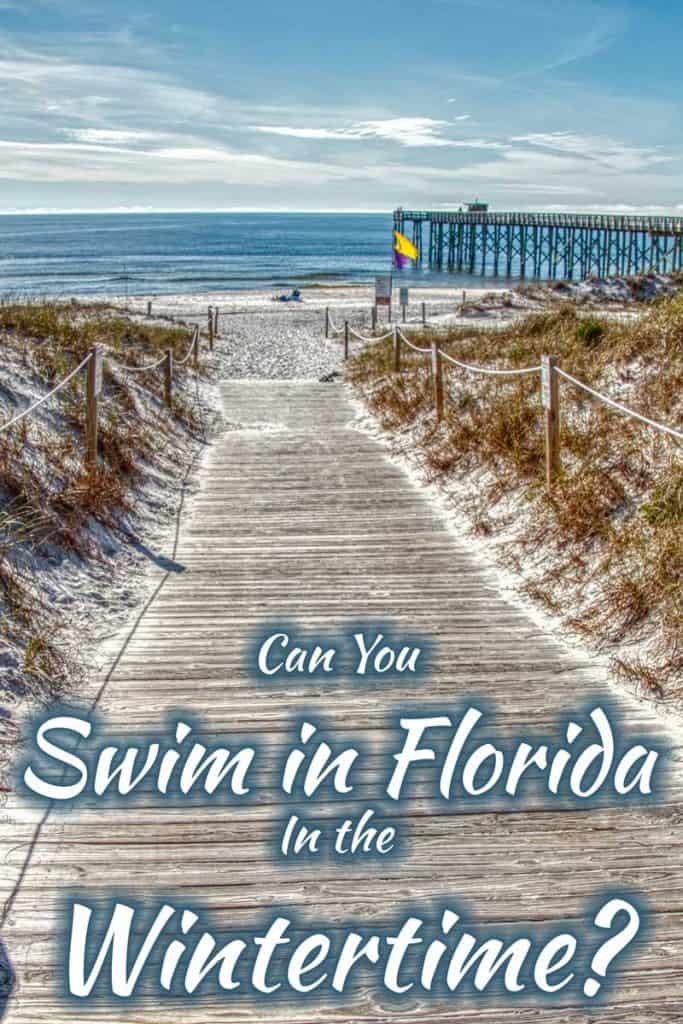 9 Awesome Things to Do in Ocala, Florida

11 Awesome Things to Do in Fort Pierce, Florida

9 Awesome Things to Do in Jupiter, Florida