There's much to worry about when you're traveling. Safety issues are typically high on the list, including water safety.

If you're traveling to Israel, you may wonder if it's one of those countries where you have to stick to bottled water or if the local tap water is safe to drink.

As someone who lived almost her entire adult life in Israel, I'm here to help! 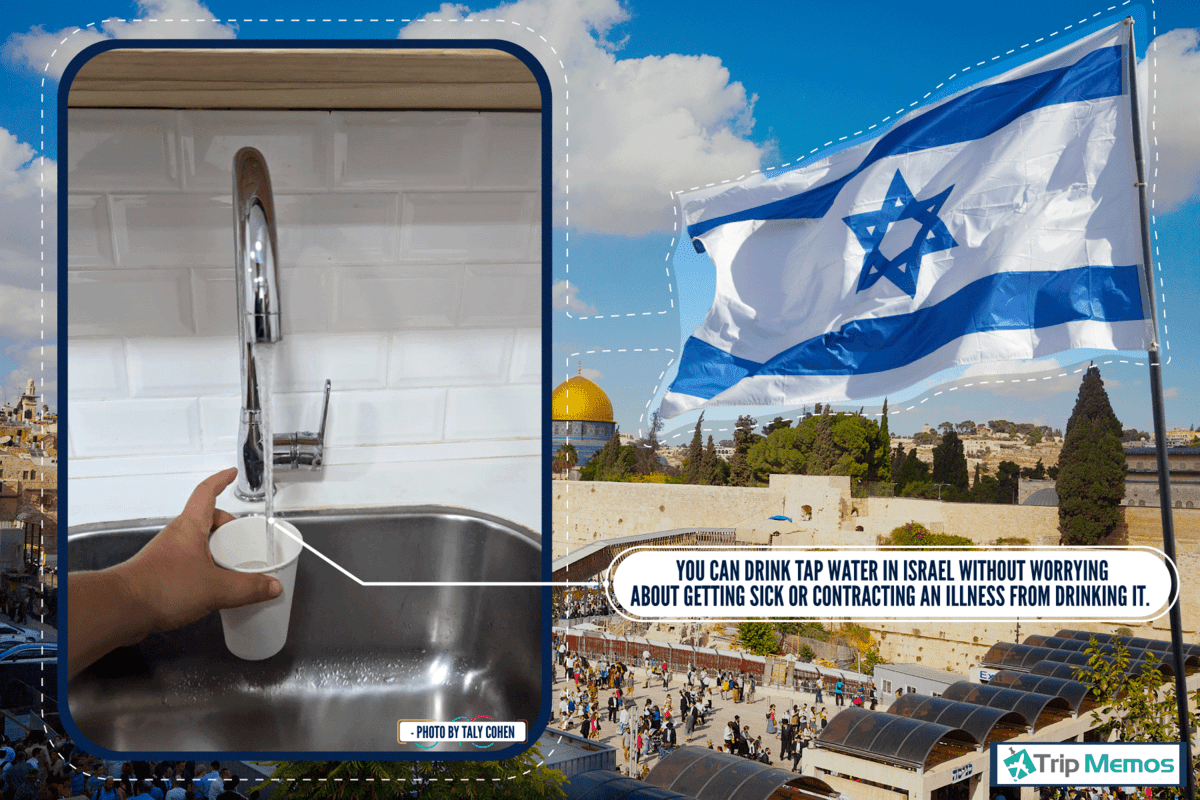 Where does Israel get its water from?

Israel gets its water from several sources. Let's talk about the main ones.

About 1 billion cubic meters of water gets pumped yearly from Lake Kinneret (also known as the Sea of Galilee). The water is then delivered through the National Water Carrier, a series of reservoirs and tunnels to cities all over the country.

Israel has two principal water aquifers: the coastal and mountain aquifer. These are large underground reservoirs from which water is regularly pumped. The water in the aquifers gets replenished during the rainy season every winter.

Israel is a world leader in desalination and overall water treatment. The process occurs in various plants across the country and allows Israel to have fresh drinking water even during drought.

Generally speaking, most houses and buildings in Israel are new. There are no issues of lead in pipes (or wall painting, for that matter).

Whatever the source, the water is managed through one national water authority: Mekorot.

Mekorot is a highly-trusted government agency that thoroughly tests water across the country at various points. They also treat the water, for example, by chlorinating it. Unfortunately, the water in Israel is no longer fluoridized.

The most important thing is - the water is constantly monitored for quality and safety.

What do they test the water for?

The pollutants they test include germs, algae, pesticides, metals, salts, and more. And since this is all done at a national level, you don't have to worry about local policy by a town or county. They've got you covered.

Is the Water in Israel Safe?

The answer to the question, "Is the water in Israel safe?" is a resounding YES.

You can drink tap water in Israel without worrying about getting sick or contracting an illness from drinking it.

Is the water safe to drink in Tel Aviv

Absolutely. You can drink tap water in Tel Aviv.

Is the water safe to drink in Jerusalem?

Yup. There's no problem drinking tap water in Jerusalem either.

The same holds for pretty much anywhere in the country.

Just like everywhere else, a temporary piping issue could cause a potential contamination issue. When that happens - which is not often - the authorities quickly alert the population and suggest boiling drinking water.

If you find yourself in a situation where tap water is unsafe to drink, boil the tap water for at least one minute. This will kill any bacteria that might be present and make it safe for you to drink. Let the water cool down before you drink it.

Alternatively, you can purchase bottled water from stores or supermarkets around Israel (or anywhere else).

And I don't recall any time where the water quality warning was in effect for more than a few hours, so you don't need to get too many bottles.

That depends on where you are in the country. As I explained above, there are various water sources, some more localized than others.

Personally, I find that the taste of water in Jerusalem is different from that in Tel Aviv. Both are safe to drink - it's a tiny change in flavor.

Are there alternatives to Tap Water in Israel?

You can buy bottled mineral water in Israel, just like anywhere in the world.

In fact, restaurants and hotels would like nothing better than to sell you bottled water at exorbitant prices. If budget is not an issue and you prefer a Perrier, go ahead and enjoy!

However, if you prefer to save, you can absolutely ask for tap water.

In fact, the law in Israel says that a restaurant must serve you cold tap water. They're supposed to offer that to you.

Even if they fail to do that, you're entitled to request and receive a pitcher of cold tap water. If they refuse, file a complaint with the Ministry of Tourism, along with the date and location, and they will likely get fined.

Other Water Safety Issues When Traveling in Israel

Since we're discussing water safety, here are a couple of other issues -

To Recap - You Can Drink Tap Water in Israel

Tap water in Israel is perfectly safe to consume. You don't need to buy bottled water - unless you feel like it.

Even though there are choices for filtered and bottled water in the stores, Israelis typically still prefer to drink tap water due to its freshness and taste. In fact, most Israelis never drink anything else!

Should You Rent a Car When Visiting Israel?