There are many reasons why people choose to visit Alaska, but one of the most popular is to take advantage of the state’s exceptional whale-watching destinations. Whether you’re interested in killer whales, beluga whales, or grey whales, there’s a good chance you’ll snap some incredible pictures on an Alaskan whale-watching tour. Of course, you could increase your odds of seeing certain whales depending on where and when you visit the 49th state. 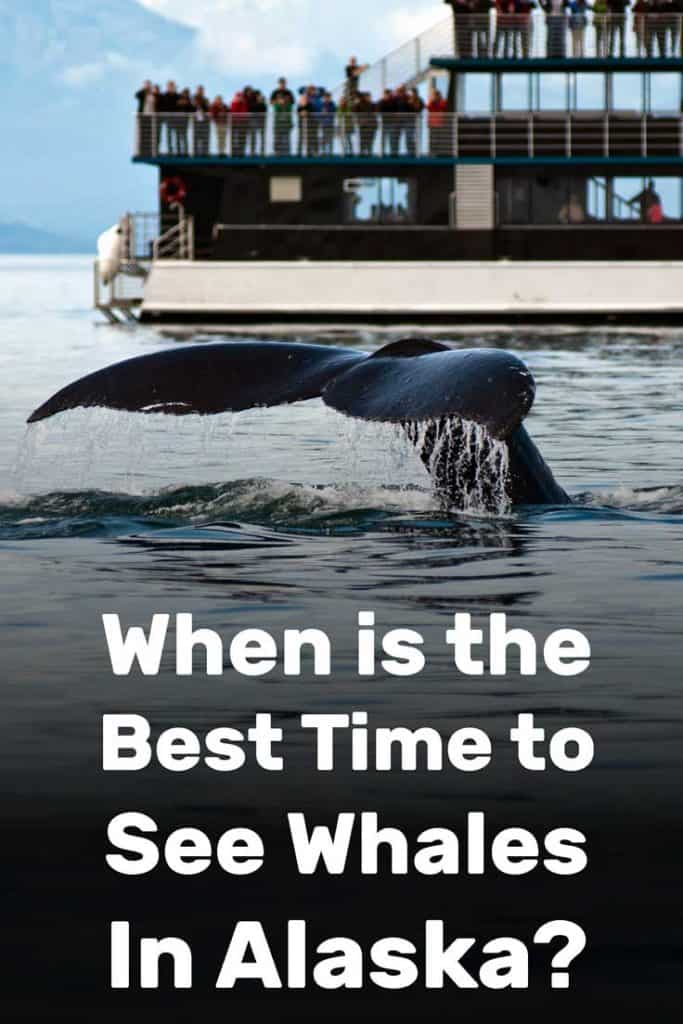 Summertime is the best time for whale watching in Alaska because that's usually the peak of the whale migration season. But you could also see whales in the spring and fall. You’ll have the best chance of seeing whales if you book a whale-watching expedition between April and September. Although many tour companies offer boat tours during other seasons, it’s nearly impossible to see whales during the winter season.

Your whale-watching experience will be very different depending on where and when you visit Alaska. While whale sightings are most common between April and September, different areas of Alaska tend to attract different species.

We joined a marine tour of Kenai Fjords National Park and that's we got our Alaskan whale watching experience. We were relatively late in the season - late August - but we were fortunate enough to spend some time among feeding grey whales AND see a pod of orcas too!

Read more about our own Alaska Cruise Tour in Kenai Fjords National Park (I'll link to this again at the end of the post, so you can keep reading now and hop over to that post once you're done).

Also, you need to ensure you’re booking your tour with a company that’s well-experienced in tracking whales. In the article below you’ll find all the information you need to know about the where, when, and who of whale watching in Alaska. By the time you’ve finished this piece, you’ll understand everything necessary to get the most out of your Alaskan whale-watching trip.

Where and When to See Whales In Alaska

While humpback whales can usually be found along most of coastal Alaska during migration season, different species tend to favor different areas of the state. People who want to have the best chance of seeing specific whales on their tour need to focus their attention on the areas listed below.

Located on the southern coast of the Gulf of Alaska, Prince William Sound is one of the most popular areas for humpback whales in the summer season. The reason so many humpbacks are attracted to this area has to do with its large concentration of fish. 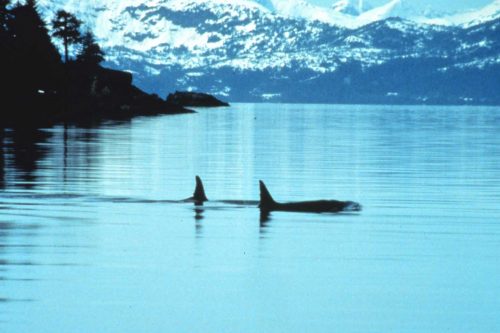 Located close to Prince William Sound, Resurrection Bay refers to an area that runs from the city of Seward down to Kenai Fjords National Park. Just like Prince William Sound, the two most common whales you’ll see in the summer are humpbacks and (depending on salmon schools) orcas. If you visit during spring months like April or May, however, you might catch a glimpse of migrating gray whales in Resurrection Bay.

Although some people claim they can clearly see whales from beaches by Resurrection Bay, it’s still highly recommended you book a boat tour to enjoy the best views. Since whales so reliably travel to Resurrection Bay’s waters, tour companies frequently share info on sightings with each other to ensure visitors see plenty of whales on their trip.

Read more: Things to see and do in Seward, Alaska

Since beluga whales are now considered an endangered species, they tend to be one of the most difficult whales to spot in Alaska. For those who are determined to see this whale up-close, however, don't despair!

Beluga whale fans must plan a whale-watching tour out of Cook Inlet, which is near Alaska’s capital city Anchorage. Your best chance of seeing a beluga whale in Cook Inlet is between July and September either before or after high tide. Just like orcas, beluga whales are interested in eating salmon, so they will typically appear near large salmon schools.

By the way, there’s an area just south of Anchorage known as Beluga Point Sight. As you might’ve guessed from the name, there have been many reported beluga sightings by this coastal point, especially in the summertime.

Located in southeastern Alaska, the city of Juneau is well known as a jumping off point for the Inside Passage, which remains one of the most reliable destinations for large groups of feeding humpback whales. In the summertime, you’re guaranteed to find dozens of humpbacks greedily feeding on local fish in this beloved whale-watching destination.

Orcas can sometimes be found in areas of southeastern Alaska, but humpback whales always steal the show. Other marine animals you might see on a whale-watching journey from Juneau include otters and sea lions.

Sometimes called “Alaska’s Emerald Isle,” Kodiak Island is most famous for its large brown bear population. Interestingly, this island is also one of the best spots in the state to catch a glimpse of migrating gray whales in the spring. Tourists in the past few years have even reported seeing gray whales appear within sight of coastal areas.

Now that you know some of the best places and times to see whales in Alaska, you need to find a tour company that meets your travel needs. Let’s go through a few of the most respected tour companies in The Last Frontier to help you on your whale-watching quest.

Mind you, we only tried the first one. The rest were picked off online recommendations and reviews by various travelers.

Going out of Seward, this company is the official contractor for Kenai Fjords National Park. We took their park tour and had a park ranger on board providing information, in addition to the captain's narration. While we did see both orcas and grey whales, the National Park tour does not guarantee whale sightings.

If your heart is set on whale watching, you can take one of their two designated whale excursions: The gray whale watching cruise or the Orca quest cruise.

Founded in the 1950s, Phillips Cruises & Tours is a highly respected cruise company that takes guests through Prince William Sound. A few perks that come with booking a Phillips cruise include free food and drinks, narration from a US Forest Service Ranger, and a “no sea-sickness guarantee.”

Although Phillips tours focus on the area’s glaciers, Rangers go out of their way to point out wildlife in the area, including whales. All Phillips tours are on catamaran vessels that depart from the city of Whittier.

If you're looking for an alternative to Major Marine Tours when visiting Resurrection Bay and Kenai Fjords National Park, consider booking a cruise with Kenai Fjords Tours. This Seward-based company has been in business since 1974 and offers some of the highest-rated wilderness excursions in the region.

There are many different tour packages to choose from depending on what you’re interested in. The tours that tend to interest whale-watchers are the gray whale watch tour and the Resurrection Bay tour. As an added bonus, all of these tours come with a complimentary meal.

The company Alaska Travel Adventures boasts one of the best whale-watching excursions from Juneau. The best feature about this tour is that whale sightings are guaranteed in your ticket price.

All Alaska Travel Adventures tours take place on jet boats with comfortable heating on the inside, glass windows, and a viewing pier. In addition to spotting whales, your captain/tour guide will draw your attention to other marine life as well as the Mendenhall Glacier on your tour. These tours are offered between May and September every year.

You’ll get to see plenty of humpback and fin whales as well as brown bears, seals, and eagles on any tour offered by this company. If you don’t like the pre-arranged tours offered in this company’s catalog, Geographic Marine Expeditions allows you to customize your own tour.

Tips For Getting The Most Out Of Whale-Watching

Whale watching cruises are usually long and they're not always easy. We've done four such excursions during our travels across North America, in the following locations: New Hampshire, Monterey, Oregon and of course, Alaska.

Each trip was different but they were all fairly long and relatively demanding. So, here are a few tips that might help make yours better.

After you’ve booked your whale-watching voyage, it’s time to get packing. You'll be out at sea, away from your hotel room and car for several hours, so make sure you bring stuff along. Some boats are large enough to have small shops and some cruises offer meals - check before you pack!

No matter how clean your binoculars are, you won’t enjoy a whale-watching voyage if you’re suffering from seasickness. Thankfully, there are ways to reduce your risk of suffering from this nauseating condition.

First off, be sure you get a good night’s sleep before your trip. If your body is not well rested, you will be far more sensitive to the rocking of the ship.

Second - but possibly more important - take that anti-seasickness pill! You can either get your own before the trip or buy one from the crew. At least that was the case during our trip with Major Marine Tours. Oh, how I wished I had taken that pill!

Getting to see whales up-close is a once in a lifetime experience, especially in Alaska. There are few places on earth that rival The Last Frontier’s many whale viewing locations. No matter what whale species you’re interested in, you shouldn’t have great difficulty finding a tour that can supply you with everything you want in a whale-watching adventure.

And finally, as promised, here's that link again -

19 Awesome Things to Do in Sitka, Alaska

When Is the Best Time to Visit Alaska?