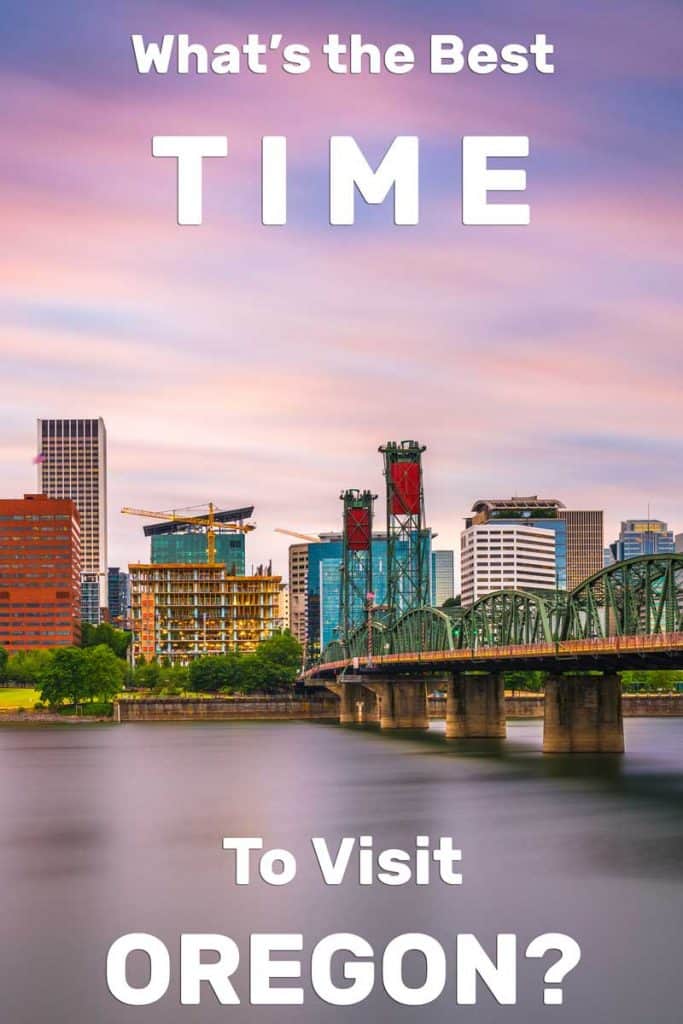 The best time to visit Oregon will actually vary depending on two things: what part of the state you are visiting and what you want to experience while you are there. Most people think of Oregon as being pretty gray and rainy all year round, but there are actually many different weather patterns, and all of the seasons have their merits.

The most popular time to visit the state is usually during the summer months of June through August. However, the state has a variety of climates, providing visitors with awesome destinations yeararound.

To help you get a better idea of when you would have the most fun on an Oregon vacation, we will look at each season individually. Plus, we will also look at the two main areas of the state the coastal area, west of the Cascade mountains, and the eastern part of the state between the Cascade Mountains and Idaho.

The Best Time to Visit Oregon

Let's take a look at Oregon through the seasons, see what the weather is like and which destinations are a good fit for travelers during that time.

Oregon in the Spring

The Spring months are fairly mild in both the eastern and western parts of the state. In the northern coastal areas like Astoria, you can expect the temperatures to stay around 40º-55º F with warmer days reaching up to 60ºF. A lot of rain can be expected at the beginning of the season, but lessening as it gets closer and closer to summer. The southern coastal cities like Brookings will be slightly warmer but also a lot rainier, with an average of 9 inches in March and 6.5 inches of precipitation in April.

On the western side of the state in Burns and Ontario, the spring weather is considerably warmer with days in the high 60s and cooler nights in the low 30s to 40s. There is much less rain on that side of the state. Monthly averages are less than an inch of precipitation.

If you are interested in seeing the famous cherry blossoms in Portland, then spring will definitely be your time of year! Late March through early April is the time to make your way to Portland for a visit to Tom McCall Waterfront Park where the trees will be in full bloom.

The higher elevations like Mt. Hood will still be in the midst of skiing season, and from February to May are good times for whale watching as Gray Whales are making their way to Alaska at that time of year. Depoe Bay is an ideal spot for catching a glimpse at the migration.

Spring is an excellent time for hiking as well because many of the trails will be surrounded by blooming wildflowers. A visit to Eugene and Mt. Pisgah is ideal towards the end of March until the beginning of June.

Oregon has plenty of festivals in the spring including the Wooden Shoe Tulip Festival in Woodburn, the Yachats Original Arts and Crafts Fair, and the Ashland Independent Film Festival. May is also good for wine lovers since it is Oregon Wine Month.

Oregon in the Summer

The summer months heat up a bit on both sides of the Cascades. In coastal areas like Astoria and Brookings, the temperature doesn't fluctuate as much as it does in other parts of the state, but summer still has temperatures climbing to the high 60s or low 70s on average. The rainfall drops to only 1 or 2 inches per month.

Heading west of the Cascades to Burns and Ontario, the summer weather sees temperatures ranging from the mid-40s on the low end and low 90s on the high end. These are definitely the driest months of the year with less than a half-inch of rain on average.

Summer in Oregon means a lot of time spent in the great outdoors. Many people make their way to the state to enjoy the many rivers and other waterways, specifically the Grande Ronde River which has outfitters offering guided river tours and floating parties.

It is also a good time of year to take waterfall hikes. If you are visiting the Pacific Northwest areas of the state, there are tons of waterfalls, many of which can be reached on easy family-friendly hikes. In fact, the entire coastal area, all 363 miles of it, offers a lot of rugged beauty during the summer months. Visits to the Prehistoric Gardens and the Samuel H. Boardman State Scenic Corridor are very enjoyable from June through August. Read more about these in our Columbia River Gorge Day Trip Guide.

For those that want to explore all of the "weirdness" that Portland has to offer, summer is a good season because the drier days make it easier to explore the city on foot or on bicycles. Hiking in the Columbia River Gorge is also good in the summer months, but keep in mind that this will also be the most crowded time of year, especially on weekends.

Summer festivals can definitely be found across the state such as the Lincoln City Summer Kite Festival, the Sunriver Music Festival, and the Pendleton Round-Up which has been going strong since 1910.

Oregon in the Fall

On the western side of the state, fall brings a wider range of temperatures early fall will still be quite warm with highs in the low 80s, but by November, days can be cold enough for snow. Precipitation amps up a little with around one inch being average per month.

Many Oregon natives will mention that fall is their favorite time of year. The tourist season dies down a bit and the days may require a sweater due to chillier winds, but they aren't so cold yet that you have to lug out the winter gear.

Those visiting Portland in the fall may want to try out one of the cycling brewery tours. There are 75 different breweries within the city limits. If the beer doesn't appeal to you, the fall months are also when the apples and pears are in season. Many choose to take the Hood River Fruit Loop to visit orchards and sample the fresh fruits and ciders that are on offer.

Hiking in the fall comes with a riot of colors. The leaves on the walnut trees will be kissed in gold, the grapevines turn bright red and orange hues, all mixed in with the deep emeralds of the evergreen trees. Many people visit during "leaf season" to experience the colors in the Willamette Valley or the Wallowa Mountains.

The West Coast Giant Pumpkin Regatta takes place each October, and there are other festivals to enjoy like the Stormy Weather Arts Festival or the Portland Book Festival.

Oregon in the Winter

The upper elevations like Bend or Burns will drop down into the 20s some days, and the eastern part of the state like Ontario can even see temperatures in the high teens. The city that sees the most precipitation is Newport which has an average of 12 inches in December!

Most people heading to Oregon in the winter are in search of places to ski, and there are several to choose from. There are favorites like Timberline Lodge or the Cooper Spur Mountain Resort. Many skiers enjoy a trip to Bend, Oregon as it offers North America's longest ski season.

Golfers looking for a bargain will find that the coastal golf courses often offer cheaper green fees in the winter months. Winter is also when the Oregon Shakespeare Festival gets into full swing. Another popular winter activity is visiting the fossil beds in the eastern part of the state.

In late December, whale watching is once again really good as the Gray Whales head back south after their summer travels to Alaska. Winter is also when you will find the Willamette Valley Oregon Truffle Festival and the Portland International Film Festival.

The Best Time to Visit Oregon Is...

The best time to visit Oregon is entirely up to you! Your travel plans will have to hinge on what you want to do and see when you are in the state as all times of year have their own merits.

It's only one reason why we fell in love with Oregon as an awesome Northwest destination. We've linked to some of the destinations along the post, but here are a few more links to our favorite blog guides -

The Oregon Bucket List: 11 Places You Really Should Visit

13 Awesome Things to Do in Gold Beach, Oregon

10 Top Things to Do in Santa Cruz, CA